Prince Luigi Amedeo, Duke of the Abruzzi (January 29, 1873 – March 18, 1933) was an Italian mountaineer and explorer, member of the royal House of Savoy and cousin of the Italian King Victor Emmanuel III. He is known for his Arctic explorations and for his mountaineering expeditions, particularly to Mount Saint Elias (Alaska–Yukon) and K2 (Pakistan–China). He also served as an Italian admiral during World War I.[1]

He was born in Madrid, Spain as the third oldest son of Prince Amadeo of Savoy, Duke of Aosta and his first wife Donna Maria Vittoria dal Pozzo della Cisterna. Prince Luigi Amedeo was a grandson of King Vittorio Emanuele II of Italy. He was born during his father's brief reign as King Amadeo of Spain. His siblings are Prince Emanuele Filiberto, Prince Vittorio Emanuele, and Prince Umberto. Shortly after his birth his father, who had reigned in Spain since 1870, abdicated and returned to Italy in 1873. Prince Luigi Amedeo was a member of the House of Savoy, well known in Europe since the 12th century. His uncle became King Umberto I of Italy in 1878, and his cousin became King Vittorio Emanuele III in 1900.

The title Duke of the Abruzzi (Italian: Duca degli Abruzzi) was created by King Umberto I in 1890 for Luigi Amedeo, who was a son of the abdicating King of Spain Amadeus and initially was given the title of Infante of Spain. His ducal title referred to the central Italian region of Abruzzo.

From 1893 to 1896, Luigi Amedeo traveled around the world, including Eritrea, then an Italian possession, and Vancouver. In September 1893, he traveled to Italian Somaliland to quell the unrest and stayed for a month to guard the port of Mogadishu, giving him his first contact with a land to which he would later devote the last years of his life and in which he would choose to die.[2] He had begun to train as a mountaineer in 1892 on Mont Blanc and Monte Rosa (Italian Alps): in 1897 he made the first ascent of Mount Saint Elias (Canada/U.S., 5,489 m). There the expedition searched for a mirage, known as the Silent City of Alaska, that natives and prospectors claimed to see over a glacier. C. W. Thornton, a member of the expedition, wrote: "It required no effort of the imagination to liken it to a city, but was so distinct that it required, instead, faith to believe that it was not in reality a city."[citation needed]

Another witness wrote in The New York Times: "We could plainly see houses, well-defined streets, and trees. Here and there rose tall spires over huge buildings which appeared to be ancient mosques or cathedrals."

In 1899, Prince Luigi Amedeo organized an expedition towards the North Pole. In spring he arrived in the Norwegian capital Christiania (the present day Oslo) with 10 companions. The duke acquired the Jason, a steam whaler of 570 tons. Renamed Stella Polare (“Pole Star”) the ship took the expedition through the frozen sea. On 12 June they headed for Archangel (Arkhangel’sk). 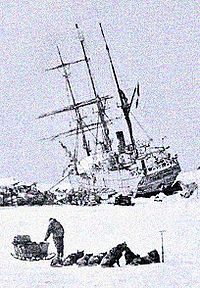 The Stella Polare was trapped and threatened to sink. The crew were obliged to land with the utmost haste and to secure materials for building a dwelling.

On 30 June the Stella Polare dropped anchor in the docks of Arkhangel’sk and the duke was solemnly received by governor Engelhardt. The same day, Prince Luigi Amedeo was invited to meet the local authorities and the present foreign diplomats.

On 7 July, a local newspaper wrote:

The city theatre arranged an extraordinary spectacle in the presence of the Duke of the Abruzzi. The drama The princess of Baghdad, consisting of three acts, was performed. Before the curtain was raised the orchestra had played the Italian royal anthem…

Later the duke himself wrote about his stay in Arkhangel’sk: "Our departure was set for July 12. Early in the morning the church was open to us and we, although being Catholic, were allowed to join the mass. In the afternoon all the dogs were brought back on board to their kennels. In the evening the Stella Polare put out and was escorted by two steamers down the Dvina. I still remained on shore, as well as Doctor Cavalli, in order to spend the evening together with our Italian friends. Next evening we left Arkhangel’sk. During the whole journey we saw flags being hoisted to welcome us…"

Twenty men took part in the expedition, among them Captain Umberto Cagni, Lieutenant F. Querini and Doctor A. Cavalli Molinelli. They planned to go to Franz Joseph Land, in the Arctic wilderness, to establish a camp in which to stay during wintertime and, afterwards, to reach the North Pole by dogsled across the frozen sea.

Prince Luigi Amedeo established the winter camp on the Rudolf-Island. The expedition was to start at the end of the Arctic Night. The duke lost two fingers during winter because of the cold, which made it impossible for him to join the trip by sled. He left the command over the pole expedition to Captain Cagni. On 11 March 1900 Cagni left the camp and reached latitude 86° 34’ on 25 April, setting a new record by beating Nansen’s result of 1895 by 35 to 40 kilometres. Cagni barely managed to return to the camp on June 23. On 16 August the Stella Polare left the Rudolf-Island heading south and the expedition returned to Norway. During the expedition the northern coast of Rudolf-Island and two other islands were explored and measured.

In 1906, inspired by Henry Morton Stanley's last wishes, the Duke led an expedition to the Ruwenzori Range (5,125 m), in Uganda. He scaled sixteen summits in the range, including the six principal peaks. One of them, Mount Luigi di Savoia, bears his name. The highest peak was reached on 18 June 1906. 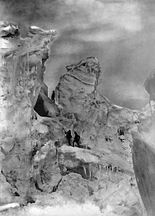 The Duke and his guides climbing an icefall on Chogolisa in 1909.

The next great expedition, in 1909, aimed to climb K2 in Karakorum. A team led by Prince Luigi Amedeo reached a height of 6,250 m on the ridge in 1909. The standard route up the mountain (formerly known as K2's East Ridge) climbs today on the Abruzzi Spur.

In an attempt on Chogolisa he and his companions again failed to reach the summit, but set a world altitude record.

In the Italian Navy

A vice-admiral in the Italian Royal Navy (Regia Marina), he was Inspector of Torpedo Craft from 1911 to 1912. During World War I, he was the Commander-in-Chief of the Italian Fleet (1914–1917) based in Taranto, his flagship being the Conte di Cavour. Under the Duke, the Regia Marina was responsible for saving the Army of the Kingdom of Serbia.[3] In February 1917 he was replaced by Paolo Thaon di Revel, under pressure of the British and French allies. In February 1918, he was promoted to Admiral, but played no role of importance anymore.

The Explorers Club in New York elected the Duke to its highest category of membership — Honorary Member — in 1912.[citation needed]

The Duke assisted Italian dictator Benito Mussolini with the Italo-Ethiopian Treaty of 1928. He traveled to Addis Ababa with gifts.[4] One gift, a Fiat 3000 tank, ended up playing a role in crushing the abortive coup d'état of 1928.[5]

In 1932, the Duke was briefly the President of the newly merged Italian Line of steamships.[3] In 1931, combining all of Italy's transatlantic carriers into the Italian Line was one of Mussolini's biggest business deals. However, the Duke resigned soon after SS Rex broke down at Gibraltar. According to him, "My reason is that I have been unable to achieve harmony among executives who formerly headed competing lines."[6]

In 1918, the Duke returned to Italian Somaliland. In 1920, he founded the "Village of the Duke of Abruzzi" (Villaggio Duca degli Abruzzi or Villabruzzi) some ninety kilometres north of Mogadishu. It was an agricultural settlement experimenting with new cultivation techniques. By 1926, the colony comprised 16 villages, with 3,000 Somali and 200 Italian (Italian Somalis) inhabitants. Abruzzi raised funds for a number of development projects in the town, including roads, dams, schools, hospitals, a church and a mosque. He died in the village on 18 March 1933. After Italian Somaliland was dissolved, the town was later renamed to Jowhar.[7]

In the early years of the twentieth century the Abruzzi was in a relationship with Katherine Hallie "Kitty" Elkins, daughter of the wealthy American senator Stephen Benton Elkins, but the Abruzzi's cousin King Victor Emmanuel III of Italy refused to grant him permission to marry a commoner. His brother, Emanuele Filiberto, to whom Luigi was very close, convinced him to give up the relationship.[8] His brother later approved of young Antoinette "Amber" Brizzi, the daughter of Quinto Brizzi, one of the largest vineyard owners in northern Italy. In the later years of his life, Abruzzi married a young Somali woman named Faduma Ali.[9]