Prince Nicolas of Sweden, Duke of Ångermanland (Nicolas Paul Gustaf Bernadotte;[1] born 15 June 2015) is a Swedish prince and the younger child and only son of Princess Madeleine, Duchess of Hälsingland and Gästrikland, and Christopher O'Neill. He is a member of the Swedish Royal Family and is eighth in the line of succession to the Swedish throne.

Prince Nicolas was born on 15 June 2015 at Danderyd Hospital in Danderyd, Sweden.[2][3] The birth was greeted by a 21-gun salute from Skeppsholmen in Stockholm and from the saluting stations in Gothenburg, Härnösand, Karlskrona and Boden.[4] On 17 June, his names and title were announced at a state council by his grandfather, King Carl XVI Gustaf.[5]

A Te Deum thanksgiving service was held in his honour in the Royal Chapel at Stockholm Palace on 18 June 2015.[6]

Nicolas was baptised into the Lutheran faith by Antje Jackelén, the Archbishop of Sweden, on 11 October 2015 in the Royal Chapel of Drottningholm Palace.[7] SVT announced that it would broadcast the ceremony live, despite earlier reports that it would not due to complaints from the public.[8] His godparents were his maternal uncle, Prince Carl Philip; his paternal aunt, Natascha Abensberg und Traun; his paternal uncle, Henry d'Abo; his mother's cousin, Gustaf Magnuson; and friends of his parents, Katarina von Horn and Marco Wajselfisz.[9] 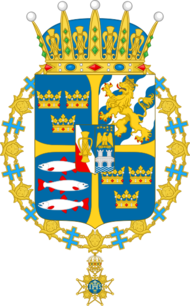 Nicolas is styled as: His Royal Highness Prince Nicolas of Sweden, Duke of Ångermanland.