From Infogalactic: the planetary knowledge core
Jump to: navigation, search
For other uses, see Valdemar of Denmark.

Prince Valdemar of Denmark, GCTE (27 October 1858 in Bernstorff Palace – 14 January 1939 in Copenhagen) was a member of the Danish Royal Family, the youngest son of Christian IX of Denmark and his wife Louise of Hesse-Kassel. Valdemar was the younger brother of Frederik VIII of Denmark, Queen Alexandra of the United Kingdom, George I of Greece, Empress Maria Feodorovna of Russia, and Crown Princess Thyra of Hanover, but also grandfather of Queen Anne of Romania, the wife of King Michael I of Romania.

File:Christian9&Valdemar.jpeg
Prince Valdemar with his father Christian IX of Denmark

Prince Valdemar was born on 27 October 1858 at Bernstorff Palace in Gentofte north of Copenhagen. His father was Prince Christian of Denmark, later King Christian IX. His mother was Princess Louise of Hesse-Kassel. He was baptised on 21 December 1858.

In March of 1863, the Danish royal family, including four-year-old Valdemar, traveled to London for the wedding of his eldest sister, Alexandra, to the Prince of Wales, the son and heir of Queen Victoria. That November, his parents succeeded to the throne of Denmark following the death of King Frederick VII.

Prince Valdemar received his early education from tutors. In the summer of 1874, he accompanied his father during his visit to Iceland for the millennium celebrations. After his confirmation in 1874, as was customary for princes at that time, he started a military education and entered the naval college. In 1879, he was sub-lieutenant and in 1880 lieutenant. In the following years, he participated in several naval expeditions.From 1883, Valdemar lived at Bernstorff Palace near Copenhagen with his nephew Prince George of Greece.

He married Princess Marie d'Orleans on 20 October 1885 in a civil ceremony in Paris.[1] They had a religious ceremony on 22 October 1885 at the Château d'Eu, the residence of Prince Philippe, Count of Paris.[1] Among the most notable attendants were Valdemar's mother Queen Louise of Denmark, the Prince and Princess of Wales, and Marie's parents the Duke and Duchess of Chartres.[1]

The wedding was believed by one source to have been politically arranged, and in France, it was believed that the Count of Paris (the bride's uncle) was personally responsible for the match.[1] However, the same source claimed that "there was every reason to believe that [it was] a genuine love match".[1]

At the time of their marriage, it was decided that any sons would be brought up in Valdemar's Lutheran faith, while any daughters would be raised as Catholics, the faith of their mother.[2] The couple's four sons were consequently Lutherans, while their only daughter, Margaret was raised a Catholic and married a Catholic prince.[2] 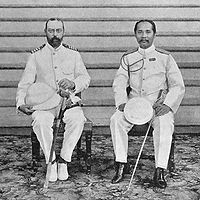 Valdemar had a lifelong naval career, but things could have been much different for the prince. He was offered two European thrones, those of Bulgaria and Norway, but declined them due to international pressures.[citation needed] He was the first president of the Seamen's Association of 1856.

He died on 14 January 1939 in the Yellow Palace in Copenhagen and was buried in Roskilde Cathedral.