Vincent is fourth in line to the Danish throne, after his father, older brother Prince Christian and older sister, Princess Isabella. 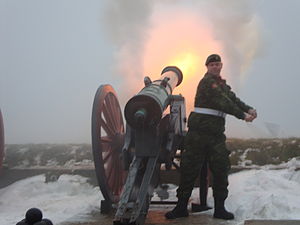 Gun salute being fired from Kronborg Castle to mark the birth of Prince Vincent.

Vincent was born at Rigshospitalet, the Copenhagen University Hospital, in Copenhagen, at 10:30 am local time, 26 minutes before his twin sister.[2][3] Shortly after the birth, while speaking to the press, the Crown Prince joked about calling his newborn son Elvis, as the twins share a birthday with the "King of Rock and Roll".[4]

At noon on 8 January, a 21-gun salute was fired from the Sixtus Battery at Holmen Naval Base in Copenhagen and from Kronborg Castle in North Zealand to mark the arrival of a royal child.

In 2009, the Danish constitution was altered, granting absolute primogeniture to the Danish throne, meaning that the eldest child, regardless of gender, takes precedence in the line of succession. Under the old system of male-preference primogeniture, Vincent would have displaced his elder sister Isabella in the line of succession; with the new law, he comes directly after her instead. As a descendant of Queen Victoria of the United Kingdom, Vincent is also in the line of succession to the British throne (and the thrones of the other Commonwealth realms), where he does take precedence over Isabella, because those realms followed the custom of male-preference primogeniture at the time of his birth and only affected those in line born after 28 October 2011.

Vincent and his sister were christened on 14 April 2011, at the chapel of the Church of Holmen. His name was announced as Vincent Frederik Minik Alexander. His godparents are his maternal uncle John Stuart Donaldson, his father's first cousin the Hereditary Prince of Sayn-Wittgenstein-Berleburg, Felipe VI of Spain, Count Michael Ahlefeldt-Laurvig-Bille, Baroness Helle Reedtz-Thott and Caroline Heering.[5]

On 3 August 2014, during the family's official visit to Greenland, Vincent, his parents and siblings, took part in a tree planting in Qaqortoq's new poplar grove, Ivalos og Miniks Poppellund, named after Vincent and his sister who are known by their Greenlandic middle names in Greenland.[6][7]

Vincent is styled as "His Royal Highness Prince Vincent of Denmark, Count of Monpezat".[8]