From Infogalactic: the planetary knowledge core
(Redirected from Prince of Condé)
Jump to: navigation, search

The Most Serene House of Condé (named after Condé-en-Brie, now in the Aisne département) was a French princely house and a cadet branch of the House of Bourbon. The name of the house was derived from the title of Prince of Condé (French: prince de Condé) that was originally assumed around 1557 by the French Protestant leader, Louis de Bourbon (1530–1569),[2] uncle of King Henry IV of France, and borne by his male-line descendants.

This line became extinct in 1830 when his eighth-generation descendant, Louis Henri Joseph de Bourbon, died without surviving male issue. The princely title was held for one last time by Louis d'Orléans, Prince of Condé, who died in 1866.

The Princes of Condé descend from the Vendôme family - the progenitors of the modern House of Bourbon. There was never a principality, sovereign or vassal, of Condé. The name merely served as the territorial source of a title adopted by Louis, who inherited from his father, Charles IV de Bourbon, duc de Vendôme (1489–1537), the lordship of Condé-en-Brie in Champagne, consisting of the Château of Condé and a dozen villages some fifty miles east of Paris.

It had passed from the sires of Avesnes, to the Counts of St. Pol. When Marie de Luxembourg-St. Pol wed François, Count of Vendôme (1470–1495) in 1487, Condé-en-Brie became part of the Bourbon-Vendôme patrimony.

After the extinction in 1527 of the Dukes of Bourbon, François's son Charles (1489–1537) became head of the House of Bourbon, which traces its male-line descent from Robert, Count of Clermont (1256–1318), a younger son of France's Saint-King Louis IX. Of the sons of Charles of Vendôme, the eldest, Antoine, became jure uxoris King of Navarre and fathered Henry IV. 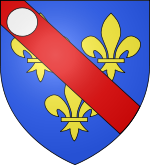 The youngest son, Louis, inherited the lordships of Meaux, Nogent, Condé, and Soissons as his appanage. Louis was titled Prince of Condé in a parliamentary document on 15 January 1557 and, without any legal authority beyond their dignity as princes of the Blood Royal, they continued to bear it for the next three centuries. He was succeeded by his son Henri I de Bourbon, prince de Condé.

Louis, the first Prince, actually gave the Condé property to his youngest son, Charles (1566–1612), Count of Soissons. Charles' only son Louis (1604–1641) left Condé and Soissons to female heirs in 1624, who married into the Savoy and Orléans-Longueville dynasties.

Upon the accession to France's throne of Henry IV of Bourbon in 1589, his first cousin-once-removed Henry, Prince of Condé (1588–1646), was heir presumptive to the crown until 1601. Although Henry's own descendants thereafter held the senior positions within the royal family of dauphin, Fils de France, and petits-fils de France, from 1589 to 1709 the Princes of Condé coincidentally held the rank at court of premier prince du sang royal (First Prince of the Blood Royal), to which was attached income, precedence, and ceremonial privilege (such as the exclusive right to be addressed as Monsieur le prince at court). 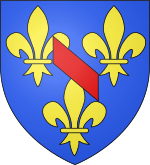 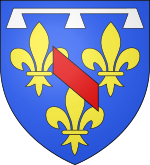 Arms of the heir to the prince de Condé and duc de Bourbon, 1588-1830, usually titled the duc d'Enghien

However, the position of premier prince devolved upon the ducs d'Orléans in 1710, so the seventh Prince, Louis III (1668-1710) declined to make use of the title, preferring instead to be known by his hereditary peerage of Duke of Bourbon, which still afforded him the right to be known as Monsieur le Duc. Subsequent heirs likewise preferred the ducal to the princely title.

After the death of Henry III Jules de Bourbon, prince de Condé in 1709, the family were in regular attendance at court. Louis de Bourbon-Condé (at that point known as the Duke of Bourbon) had in 1685 married Louise-Françoise de Bourbon, the legitimated daughter of Louis XIV of France and Françoise-Athénaïs, marquise de Montespan.

The couple had many children and produced an heir to the Condé titles and lands. Their son was Louis Henri de Bourbon-Condé, duc de Bourbon. He led a quiet life and was known at court as Monsieur le Duc after the loss of the rank of premier prince du sang in 1723. After his death the family retreated from court life but Louis Joseph de Bourbon, prince de Condé was vital in the forming of the Army of Condé - formed to support his cousin Louis XVI during his imprisonment during the revolution. He was the longest holder of the title, being known as the prince de Condé for seventy-eight years.

His son married the sister of Louis Philippe II d'Orléans better known as Philippe Égalité. She was called Louise Marie Thérèse Bathilde d'Orléans. She was the last princesse de Condé and mother of Louis-Antoine-Henri de Bourbon-Condé - titled duc d'Enghien. He was executed by Napoleon I of France at the Château de Vincennes. With the death of the duc d'Enghien, the heir to the Condé name, his father was the last holder of the title.

After his death in 1830 the Condé lands passed to the last prince's cousin Henri Eugène Philippe Louis d'Orléans, duc d'Aumale whose eldest son Louis was later a prince de Condé after gaining the title from his father.[3] 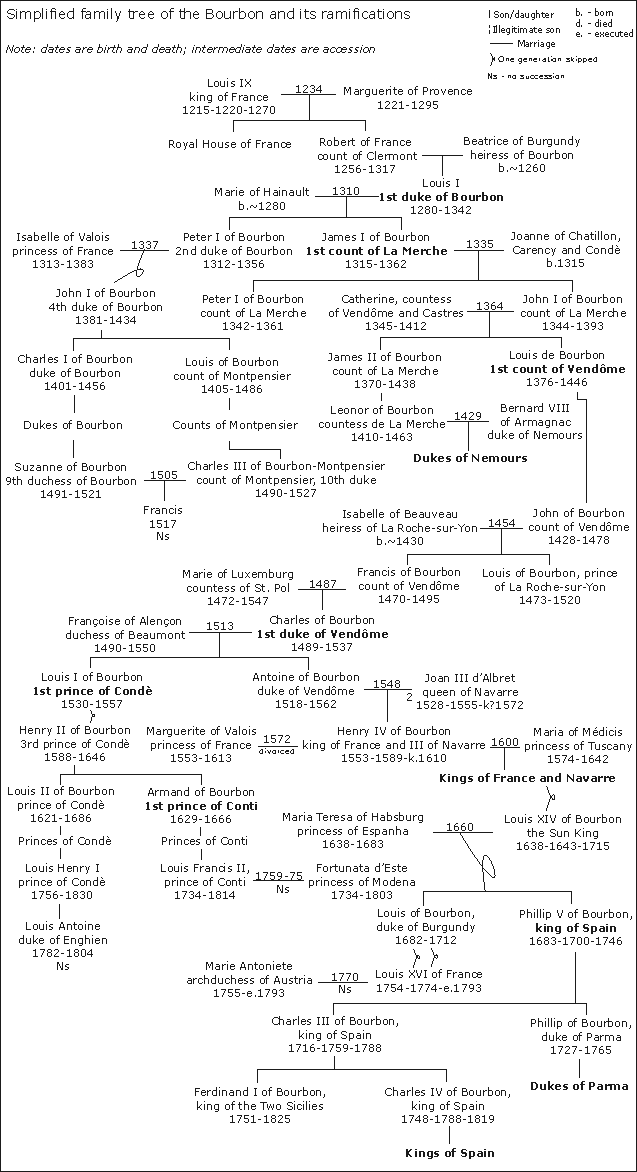 The House of Bourbon family tree.

File:Blason Condé-Conti.svg
Arms of the Counts of Soissons (1569-1641); at the extinction of their line, it was adopted by the Princes of Conti until they became extinct in 1814.

At his death, the title became extinct because the prince died without issue. The title was assumed in 1629 by:

The first prince de Conti was also the brother of the founder of the House of Bourbon-Soissons, Charles de Bourbon-Soissons. The comtes de Soissons were addressed at court as Monsieur le Comte and their wives as Madame la Comtesse. The members of the house were:

Although both the sons and daughters of these branches of the House of Bourbon held the rank of princes and princesses du sang, it never became the custom in France for them to use prince or princess as a prefix to their Christian names. Rather, sons took a title of French nobility, count or duke, suffixed with their appanage (e.g. Count of Charolais), while unmarried daughters used one of their fathers' subsidiary properties to form a courtesy style, e.g. "mademoiselle de Clermont". 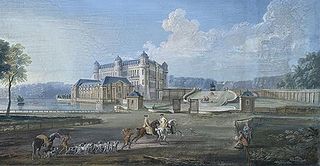 The Château de Chantilly at the time of the Grand Condé

The Condé Palace or hôtel de Condé, was the Parisian house of the Condé family situated in the 6th district of Paris. It was demolished around 1780 in order to build a theatre (théâtre de l'Odéon).

The family had two seats outside Paris: the château de Condé in Condé-en-Brie, Aisne, which they ceased to own by 1624. The other country residence was the Château de Chantilly. This was the home of the Grand Condé during his exile from court, and the host château of a party given in honour of Louis XIV in 1671. It was confiscated during the French Revolution and eventually came into the possession of King Louis Philippe who gave it to his youngest son, Henri d'Orléans, duc d'Aumale.

The wife of Louis III, Prince of Condé, Louise-Françoise de Bourbon was the builder of the palais Bourbon in Paris. Construction started in 1722 and after it was finished, it was the main residence of the Bourbon-Condés.