Princes Street is one of the major thoroughfares in central Edinburgh, Scotland, and its main shopping street. It is the southernmost street of Edinburgh's New Town, stretching around 1 mile (1.6 km) from Lothian Road in the west to Leith Street in the east. The street is mostly closed to private cars, with public transport given priority. The street has virtually no buildings on the south side, allowing panoramic views of the Old Town, Edinburgh Castle, and the valley between. 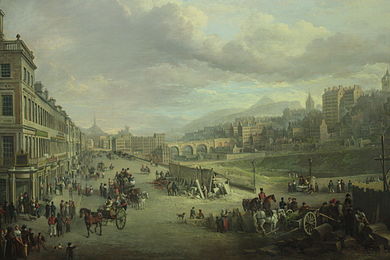 Princes Street was originally to have been called St Giles Street after the patron saint of Edinburgh.[1] However, King George III rejected the name, St Giles being also the patron saint of lepers and the name of a notorious 'rookery' of slums in London. The street is named after King George's two eldest sons, the Prince George, Duke of Rothesay (later King George IV) and the Prince Frederick, Duke of York and Albany.

It was laid out according to formal plans for Edinburgh's New Town, now known as the First New Town. These were devised by the architect James Craig and building began around 1770. Princes Street represented a critical part of the plan, being the outer edge, facing Edinburgh Castle and the original city:"Edinburgh Old Town". Originally all buildings had the same format: set back from the street with stairs down to a basement and stairs up to the ground floor with two storeys and an attic above. Of this original format only one such property remains in its original form. Through the 19th century most buildings were redeveloped at a larger scale and the street evolved from residential to mainly retail uses.

By the 1930s the architecture of Princes Street had a very mixed character. The Abercrombie Plan of 1949 proposed tighter control of design to create a more coherent appearance.[2] This theme was taken up by the Princes Street Panel, whose 1967 report proposed comprehensive redevelopment with Modernist buildings to incorporate a first-floor level walkway, theoretically doubling the shopping frontage. The plan was partially put into operation, resulting in the erection of seven buildings before the approach was dropped in the 1970s. Two of the new buildings, British Home Stores at no.64, and the New Club at nos.84–87, are now listed buildings.[3]

During the construction of the New Town, the polluted waters of the Nor Loch were drained, and the area was converted into private gardens called Princes Street Gardens. This was taken over by the Edinburgh Council in the late 19th century, by which time most of the street was commercial and there was no great need for private residential gardens. The width of Princes Street was greatly increased soon after, onto what was the northern edge of the gardens. Due to the much lower position of the gardens this led to the creation of the steep embankment on the north side, still visible today. The gardens are one of the many green spaces in the heart of Edinburgh.

From the 1880s the street, with its commanding views in combination with great ease of access, became a popular street upon which to locate hotels.

The railway companies created huge anchor hotels at either end: the Caledonian Hotel to the west, and North British Hotel to the east. In between were the Royal British Hotel, Old Waverley Hotel, and Mount Royal Hotel, all of which survive. 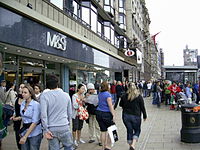 Several UK high street brands such as Boots, Scotland's largest Boots City Store, BHS, H&M, Debenhams, House of Fraser, Marks & Spencer, Topman and Topshop, hmv also Scotland's largest record store are just a few of the shops located along Princes Street. Jenners department store (now owned by House of Fraser) is an Edinburgh institution, surviving the disappearance of many other local department stores, such as Patrick Thompson's. There has been controversy over buildings from the latter half of the 20th century on Princes Street.[4] This has prompted plans to demolish the BHS and the Marks & Spencer buildings, in an effort to improve the status of the street.[5] Another problem has been that upper floors are often used for storage, rather than as office, retail or living space. At an early stage in post-World War II designs for the street, a "high level walkway" was planned, as a further shopping frontage for the first floor level, in lieu of the other side of the street. However the walkway as built was never more than a number of isolated balconies and in practice the Royal Bank of Scotland was the only business to maintain a frontage at this level for any length of time; that branch of the bank closed early in the 21st century, leaving the upper walkway largely forgotten.

Princes Street Gardens and south side

The Gardens contain the Ross Bandstand (an open-air theatre), a war memorial to U.S. soldiers of Scottish descent and a floral clock, together with other attractions. Two of the main Scottish art galleries, the Royal Scottish Academy and the National Gallery of Scotland, are located at the foot of The Mound and are served by Princes Street tram stop. Further along is the Scott Monument, a huge intricate Gothic monument dedicated to Sir Walter Scott, the author of the Waverley Novels, after which is named Waverley station, which lies at the east end of the Gardens, its westward lines dividing them. Next to the station on its north side is the former railway hotel, previously known as the North British Hotel, latterly renamed the Balmoral Hotel, and the North Bridge which sails at high level over the station. The hotel has a counterpart at the extreme west end of Princes Street. The Caledonian Hotel, now the Waldorf Astoria Edinburgh - The Caledonian,[6] sits at the north end of Lothian Road. This was built by the Caledonian Railway for their Princes Street Station which closed in the 1960s along with the lines it served.

At the west end of Princes Street, St John's Episcopal Church at the corner of Lothian Road is built at street level above a basement crypt and a small churchyard.[7] In addition, there are several fair trade outlets in this space as part of the church, whilst St Cuthbert's Church stands just to the south of it, in a far larger and older churchyard, west of the gardens.

Princes Street remains popular, although it has now fallen from its status as the most expensive place to rent shop space in Britain outside London.[8] Princes Street may be one of the few streets in the UK to have an order of Parliament placed on it to prevent any further building on the south side, so as to preserve its open vista.

Edinburgh Waverley at the East end of Princes Street is the nearest rail station.

The Princes Street tram stop is an in-road island, situated just west of the Royal Scottish Academy near the Foot of the Mound.

Edinburgh Bus Station is close to the east end of Princes street, at St Andrew Square. 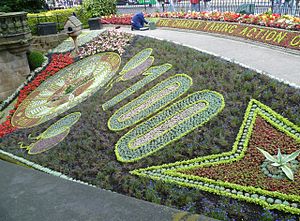