Princess Augusta of Saxe-Gotha-Altenburg (30 November 1719 – 8 February 1772) was Princess of Wales between 1736 and 1751, and Dowager Princess of Wales thereafter. She was one of only three Princesses of Wales who never became queen consort. Princess Augusta's eldest son succeeded as George III of the United Kingdom in 1760, as her husband, Frederick, Prince of Wales, had died nine years earlier.

The marriage seems to have been a happy one. Augusta and Frederick had nine children, the last born after Frederick's death. The birth of their first daughter, Princess Augusta, on 31 July 1737, took place at St James's after Princess Augusta was forced by Frederick to travel from Hampton Court Palace while in labour, simply to prevent his hated parents from being present at the birth.

Throughout their marriage, Augusta went along with her husband's wishes in the feud with his parents. 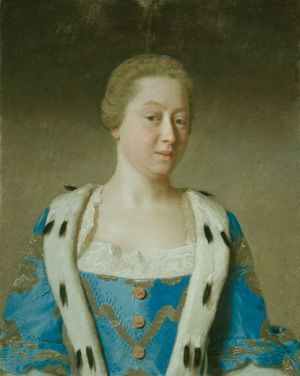 Augusta as Dowager Princess of Wales, mother of the future king, by Liotard, 1754.

Following Frederick's death, her role as mother of the heir-apparent to the throne became a more important one, and she was named prospective regent, which caused a political controversy. Shortly afterwards, she began to be influenced by John Stuart, 3rd Earl of Bute, her son's tutor, and rumours spread that they were having an affair. This was due to her being adamant that Bute was visiting her, and not her son, during his back door visits to tutor the prince. Both were pilloried in the press. Even after George III's accession, Augusta suffered widespread hostility from the public. After she died of cancer of the throat at age 52 at Carlton House, her funeral procession attracted troublemakers who followed the coffin to the grave shouting insults.

Princess Augusta enlarged and greatly extended Kew Gardens after her husband's death. Sir William Chambers built several garden structures for her. One of these, the lofty Chinese pagoda built in 1761, still remains.[1] 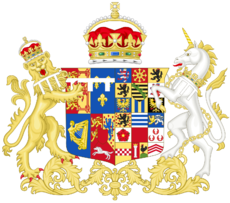 Several places in British America were named in honour of Augusta: