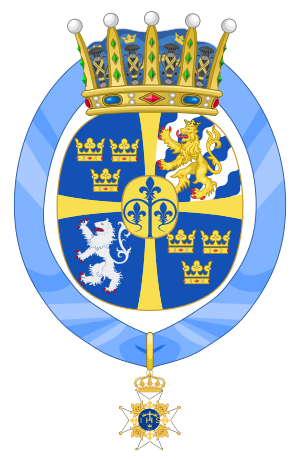 Coat of arms of Princess Lilian.

Princess Lilian, Duchess of Halland (born Lillian May Davies, later Craig; 30 August 1915 – 10 March 2013), was a Welsh fashion model who became a member of the Swedish royal family through her 1976 marriage to Prince Bertil, Duke of Halland (1912–1997). As such, she was a paternal aunt of King Carl XVI Gustaf of Sweden (although not until after his grandfather's death, which enabled her to marry Prince Bertil) and a maternal aunt of Queen Margrethe II of Denmark and Queen Anne-Marie of Greece.

Lillian May Davies was born on 30 August 1915, in Swansea, South Wales, the daughter of William John Davies and his wife Gladys Mary (née Curran). She dropped one 'l' from her first name when she became a fashion model. She was photographed for fashion magazines such as Vogue. Her parents separated in the 1920s, but they were not divorced until 1939.

In 1940 Lilian married the Scottish actor Ivan Craig (1912–1994) in Horsham, West Sussex.[1] Shortly after their wedding, Craig joined the British Army and left for Africa, where he saw active service during the Second World War.[1] In his absence, Lilian worked in a factory that made radios for the Royal Navy and at a hospital for wounded soldiers.

Marriage to Prince Bertil of Sweden

In 1943 she met the Swedish Prince Bertil, Duke of Halland, in London, reportedly at a cocktail party for her 28th birthday. Soon after their meeting they became lovers, although she was at that time married to her first husband.[1] By the time she and Bertil began their affair, Lilian and Ivan Craig were separated by the war. When the couple were reunited after the war, Craig expressed his wish to marry another woman, and an amicable divorce followed.[2]

Bertil's older brother, Prince Gustaf Adolf, Duke of Västerbotten, was second-in-line to the Swedish throne, but in 1947 he died. As Gustaf Adolf's son, Carl Gustaf, was less than one year old, it seemed likely that when the king died Bertil would have to serve as regent (other heirs having given up their places in the line of succession because of marriages not acceptable to the king). For this reason Bertil chose not to marry Lilian, so the couple simply lived together discreetly for more than thirty years. In 1946 Prince Bertil acquired a house in Sainte-Maxime, France, that became their private retreat.

Bertil never had to become regent, since his father, the king (who ascended the throne in 1950), lived long enough to see his grandson, Carl Gustaf, come of age. Carl XVI Gustaf of Sweden ascended the throne in 1973, and, having married a commoner himself, he approved Bertil's and Lilian's marriage. They were married on 7 December 1976 at the church of Drottningholm Palace in the presence of the king and the queen.

From 1976 until 2005 Princess Lilian attended the annual Nobel Prize-giving ceremony. At the age of 91 she discontinued this tradition, deciding that she was too old.[1]

Prince Bertil died on 5 January 1997 in their home. From 1997 until 2010 she continued to represent the royal family at official engagements and other occasions. She was the patron of many organizations.

In 2000 Lilian released a biography of her life with Bertil. 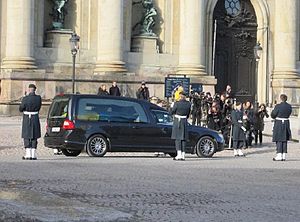 Hearse with Lilian's coffin leaves Stockholm Palace for the Royal Cemetery on 16 March 2013.

In August 2008 the Princess fell and broke her femur in her apartment,[3] and in February 2009 she again suffered a fall in her home. It was announced on 3 June 2010, that the princess was afflicted with Alzheimer's disease and was no longer able to appear in public.[4] She lived out her final years at Villa Solbacken, her longtime home in the Djurgården area of Stockholm, attended by three nurses.[1]

Lilian died in Stockholm on 10 March 2013 at age 97, sixteen years after her husband. The Royal Palace didn't give a cause of death, but Lilian had been in poor health for several years.[1][5][6] Her death came as the royal family was preparing for Princess Madeleine's wedding and the family dropped what they were doing to spend their last moments with her.[7]

Her 16 March funeral was broadcast live on SVT. It was attended by her nephew and niece-in-law: the King and Queen of Sweden; her nieces: the Queen of Denmark, Princess Margaretha, Mrs. Ambler, Princess Birgitta of Hohenzollern, Princess Désirée, Baroness Silfverschiöld, and Princess Christina, Mrs. Magnuson; her grandnieces: Victoria, Crown Princess of Sweden and Princess Madeleine, Duchess of Hälsingland and Gästrikland; and her grandnephew and grandnephew-in-law: Prince Carl Philip, Duke of Värmland and Prince Daniel, Duke of Västergötland.[8] Princess Astrid of Norway, Mrs. Ferner, was also in attendance.[9]

From her marriage until her death Lilian was styled as: Her Royal Highness Princess Lilian of Sweden, The Duchess of Halland