From Infogalactic: the planetary knowledge core
Jump to: navigation, search
For other people of the same name, see Louise of Denmark (disambiguation).

Princess Louise of Denmark and Norway (Danish: Louise af Danmark; Norwegian: Louise av Danmark) (20 January 1750 in Christiansborg Castle – 12 January 1831 in Gottorp) was born to Frederick V of Denmark and Louise of Great Britain.[1] Her eldest daughter, Marie of Hesse-Kassel, was the wife of Frederick VI of Denmark.

She married Landgrave Charles of Hesse-Kassel on 30 August 1766 at Christiansborg Castle, in Copenhagen, with her brother King Christian VII's consent.[1] This was despite advice given against it, due to many accusations of debauchery by Landgrave Charles and the poor influence he had on the King. This however did not last, as Christian VII's warm feelings for him soon evaporated, and in the spring 1767, the couple left Copenhagen to live in Hanau.[2] She would have her first child there, Marie Sophie, Princess of Hesse on October 20, 1767 and then her second, Wilhelm, Prince of Hesse on January 20, 1769. The family would then move to Gottorp Castle after her husband was appointed governor of Schleswig Holstein. In 1770, King Christian VII gave his sister a Parish and land in Güby, Schleswig-Holstein, which was named Louisenlund in her honour. She would have her third child Prince Frederik of Hesse on May 24, 1771.[1] 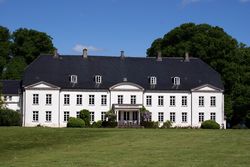 After the removal and execution of Johann Friedrich Struensee on 28 April 1772 her husband found favour with the King again and with it, he was appointed Governor of Norway in September 1772. They were very well received in Christiania, where one aristocrat, Nordahl Brun welcomed them as the "heavenly couple ", and in the Landgrave's own words, he became so popular that the Norwegians would gladly have him as King. This was clearly an illusion, and the people of Christiania soon found the cost of constantly entertaining the couple, a huge burden on town expenses.[2] With her husband's larger income, he had Hermann von Motz build Louisenlund Castle on the land in Güby as a summer residence for the couple. The Princess would have her fourth child Juliane, Princess of Hesse on January 19, 1773 before leaving Norway and moving into Louisenlund Castle in 1774. Her husband was also made Field Marshal the same year but would stay away from political circles and remain at Louisenlund till the 14th change of government in April 1784. The new change brought a close friendship with Crown Prince Frederik, who would also marry their daughter Princess, Marie Sophie.[2] They would later become King Frederick VI of Denmark and Queen Marie Sophie of Denmark.

Princess Louise would have two more children, Prince Christian of Hesse, born August 14, 1776 and Louise Caroline, Princess of Hesse, born September 28, 1789. Her husband continued as Governor of Norway and Schleswig Holstein all her life. She died at Gottorp Castle January 12, 1831 and was buried in Schleswig Cathedral.[1]

She had 6 children together with her husband, they are:

Media related to Princess Louise of Denmark at Wikimedia Commons