Princess Margaret of Connaught (Margaret Victoria Charlotte Augusta Norah; 15 January 1882 – 1 May 1920) was Crown Princess of Sweden and Duchess of Skåne as the first wife of the future King Gustaf VI Adolf. She was the elder daughter of Prince Arthur, Duke of Connaught, third son of Queen Victoria, and Princess Louise Margaret of Prussia. Nicknamed Daisy and known in Sweden as Margareta,[1] she died before her husband's accession to the throne of Sweden.

File:Bassano Victoria and Margaret.jpg
The newborn Princess Margaret with her grandmother Queen Victoria.

Princess Margaret was born at Bagshot Park and baptised in the Private Chapel of Windsor Castle on 11 March 1882 by, The Archbishop of Canterbury. Her godparents were Queen Victoria (her paternal grandmother); The German Emperor (her maternal great-granduncle, who was represented by the German Ambassador, Count Münster); the German Crown Princess (her paternal aunt, who was represented by her sister, Princess Christian of Schleswig-Holstein); Prince and Princess Friedrich Karl of Prussia (her maternal grandparents, for whom her paternal uncle the Duke of Edinburgh and aunt The Princess Beatrice stood proxy); and the Prince of Wales (her paternal uncle).[2]

She was also confirmed in the Private Chapel of Windsor Castle in March 1898.

Princess Margaret grew up as a member of the British Royal Family, taking part in family holidays and weddings. She was a bridesmaid at the wedding of The Duke and Duchess of York on 6 July 1893. [3]

When Princess Margaret of Connaught was 23 and her younger sister Princess Patricia of Connaught was 18, both girls were among the most beautiful and eligible princesses in Europe. Their uncle, King Edward VII, wanted his nieces to marry a European king or crown prince. In January 1905, the Duke and Duchess of Connaught visited Portugal where they were received by King Carlos and his wife, Amélie of Orléans, whose sons Luís Filipe, Duke of Braganza, and Prince Manuel entertained the young British princesses. The Portuguese expected one of the Connaught princesses would become the future Queen of Portugal.

The Connaughts continued their trip to Egypt and Sudan. In Cairo, they met Prince Gustaf Adolf of Sweden, the future Gustaf VI Adolf of Sweden, grandson of the Swedish King Oscar II. Originally, Margaret's sister Patricia had been considered a suitable match for Gustaf; without his knowledge, a meeting was arranged with the two sisters.[4] Gustaf and Margaret fell in love at first sight. Prince Gustaf proposed at a dinner held by Lord Cromer at the British Consulate in Egypt, and was accepted. Margaret had certainly fallen completely in love with Gustaf. Her parents were very happy with the match. Prince Gustaf was short of sight and used spectacles; he was "tall, dark, well informed, fond of music, an excellent shot and a good dancer." Gustaf and Margaret married on 15 June 1905, in St. George's Chapel, at Windsor Castle. The couple spent their honeymoon in Ireland, and arrived in Sweden on 8 July 1905.

One of Margaret's wedding presents was the Connaught tiara, which remains in the Swedish royal jewellery collection today.[5]

The couple had five children:

When Gustaf Adolf's father, Crown Prince Gustaf, acceeded to the throne as King Gustaf V in 1907, the couple became Crown Prince and Princess of Sweden. 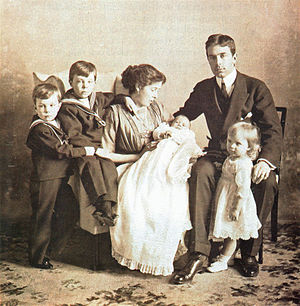 The marriage between Margaret and Gustaf Adolf is described as a happy love match.[4] Gustaf Adolf felt great pressure from the "Prussian" military discipline with which he had been raised by his mother, and he was greatly affected and attracted to Margaret's English customs, which contrasted with that of his mother's.[4]

After her arrival in Sweden, Margaret, who in Sweden was called "Margareta," received lessons in the Swedish language, and asked to be educated in Swedish history and social welfare. After two years, she spoke good Swedish. During her first years in Sweden, Margaret behaved with great seriousness and was therefore regarded as stiff, but the view of her changed because of her great interest in sports, where she showed a more relaxed and natural manner. Margaret took a great interest in many forms of sports; she used the winters for skiing, ice skating and playing hockey (what is nowadays called bandy), and played tennis and golf during the summers. She also corresponded with various relatives.

Margaret was also interested in art. She photographed, painted, and took a great interest in gardening. She and her spouse received Sofiero Palace as a wedding gift, and they spent their summers there and made a great effort in the gardens of the estate. The gardens of Sofiero were in an English style, and her children participated in their improvement. In 1915, Margaret as Kronprinsessan Margareta published the book Vår trädgård på Sofiero ("Our Garden at Sofiero") and two years later also Från blomstergården ("From the Flower Garden") illustrated with her own drawings and photographs, which were sold for the benefit of household schools with childcare.

During World War I, Margaret created a sewing society in Sweden to support the Red Cross. The society was called Kronprinsessans Centralförråd för landstormsmäns beklädnad och utrustning ("The Crown Princess's central storage for clothing and equipment of the home guard"), which was to equip the Swedish armed forces with suitable underwear. When paraffin supplies ran low she organized a candle collection, and in November 1917 she instituted a scheme to train girls to work on the land. She also acted as intermediary for relatives separated by the war. With her help, private letters and requests to trace men missing in action were passed on. She was also active in her work on behalf of prisoners. She aided prisoners of war in camps around Europe, especially British nationals. Margaret's efforts during the war were pro-British, in contrast to that of her mother-in-law's strictly pro-German attitude. In 1917, Margaret organized Margaretainsamlingen för de de fattiga ("The Margaret fundraiser for the poor"). At the end of the war, when the final steps towards full democracy were taken in Sweden, Margaret's positive attitude to reform influenced her husband the Crown Prince. Unlike the attitude of her reform-hostile in-laws, King Gustaf and Queen Victoria, this is believed to have eased political tensions and preserved the Swedish monarchy.[6] 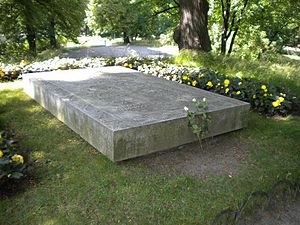 Graves of King Gustaf Adolf and his two wives, Margaret and Louise, in the Royal Cemetery on Karlsborg Island in Solna, Sweden

On 1 May 1920, her father's 70th birthday, Crown Princess Margaret died suddenly in Stockholm. The official announcement said[citation needed] infection set in following a mastoid operation. At the time, she was eight months pregnant and expecting her sixth child. In announcing her death during traditional International Workers' Day celebrations, Swedish Prime Minister Hjalmar Branting said the sun had "gone out" at Stockholm Palace.[7][8]

VA: Member Second Class of the Royal Order of Victoria and Albert
CI: Companion of the Order of the Star of India
DJStJ: Dame of Justice of St John

Upon her marriage in 1905, Princess Margaret ceased to use the arms of the United Kingdom, with an inescutcheon of Saxony, the whole differenced by a label argent of five points, the first and fifth bearing fleurs-de-lys azure, the second and fourth shamrocks vert, and the central point a cross gules.[9] Instead she used the arms of a Princess of Sweden and Duchess of Scania.