Maria Antonia of Naples and Sicily (14 December 1784 – 21 May 1806), was the youngest daughter of Ferdinand, King of Naples and Sicily, and Maria Carolina of Austria. As the wife of the future Ferdinand VII of Spain, then heir apparent to the Spanish throne, she held the title of Princess of Asturias.

She was known as Maria Antonia and was born at the Caserta Palace in Caserta, Italy. Named after her mother's favorite sister, Queen Marie Antoinette of France, she was an intelligent girl, having by the age of seventeen learned several languages. 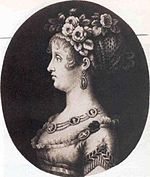 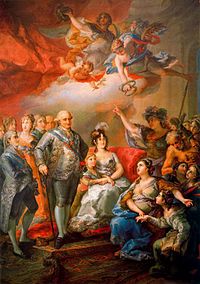 Maria Antonia (fourth from left), together with the rest of the Spanish royal family, visits the University of Valencia in 1802, shortly after her wedding. Oil painting by Vicente López.

The princess failed to provide the expected heir to the throne: her two pregnancies, in 1804 and 1805, ended in miscarriages. Her mother, Maria Carolina, was highly anti-French after the execution of her sister and brother-in-law during the French Revolution. She was also strongly opposed to the military expansion of the French republic. As Spain became more easily dominated by Napoleon Bonaparte, there were rumours that Maria Carolina wanted her daughter to poison the Queen of Spain and Manuel Godoy, Spain's prime minister. However, as with most poison rumours of the period, it is unlikely to be true, not least because both women were devout Roman Catholics and secondly because the Spanish court's ties to France were in no way greater or lesser than most in Europe's after Bonaparte's early victories. Maria Antonia's mother-in-law, Queen Maria Luisa, disliked her daughter-in-law and she encouraged rumours of a Habsburg poisoning plot, even subjecting her books and clothes to scrutiny in order to discredit her daughter-in-law further. In spite of all of this campaign of character assassination, Maria Antonia managed to gain considerable influence over her husband and created an opposition party against Queen Maria Luisa and Godoy.[citation needed]

She died of tuberculosis on 21 May 1806 at the Royal Palace of Aranjuez in Aranjuez, Spain. It was rumoured that Maria Antonia had been poisoned by Maria Luisa and Godoy, although again there is no actual evidence. However, Queen Maria Carolina, who was devastated, truly believed this. Maria Antonia's father, King Ferdinand, consolidated Naples and Sicily into the Kingdom of the Two Sicilies a decade after her death.

The Neapolitan princess was buried at El Escorial in Spain. Her husband was to marry three more times: - 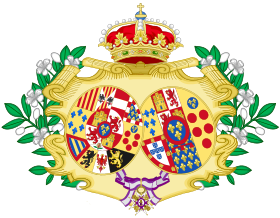