From Infogalactic: the planetary knowledge core
Jump to: navigation, search
Not to be confused with Princess Maria Teresa of Savoy.

Maria Theresa of Savoy (Maria Teresa; 31 January 1756 – 2 June 1805) was a princess of Savoy by birth and the wife of Charles Philippe, Count of Artois, grandson of Louis XV and younger brother of Louis XVI. Some nineteen years after her death, her husband assumed the throne of France as King Charles X.

Princess Maria Theresa of Savoy was born at the Royal Palace in Turin during the reign of her grandfather Charles Emmanuel III of Sardinia. The daughter of the heir apparent and his wife, Victor Amadeus and Maria Antonia of Spain, she was the couple's fifth daughter and eleventh child. She was raised with her sister Princess Maria Giuseppina who was three years her senior and who she would join later as a member of the royal family of France.

Following a series of dynastic alliances, Maria Theresa was betrothed to the Count of Artois, the youngest grandson of the reigning Louis XV of France. Artois had previously been intended to marry Louise Adélaïde de Bourbon, the daughter of the Prince of Condé. However the union never took place as her rank was much lower than Artois who, as a male line descendant of a French monarch, was a grandson of France. Maria Theresa married the count in a proxy ceremony at the Palazzina di caccia di Stupinigi before her official marriage, which took place at the Palace of Versailles on 16 November 1773.

This marriage was the second of three Franco-Savoyard marriages that would take place within four years. In April 1771, her elder sister Maria Giuseppina had married the Count of Provence, who was the elder brother of Maria Thérèse's husband; later, in 1775, her brother Charles Emmanuel, by then heir to the throne of Sardinia himself, would marry Princess Marie Clotilde of France, sister of the Count of Artois. 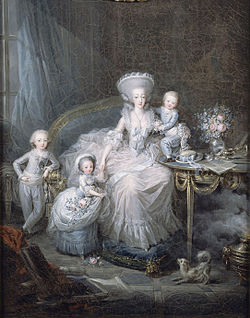 Marie Thérèse with her three surviving children, by Charles Leclercq, 1783.

As her husband was the grandson of a king, the newly named Marie Thérèse held the rank of granddaughter of France. This rank allowed to her to maintain the style of "Royal Highness" that she had enjoyed from birth as the granddaughter of the king of Sardinia. However, at Versailles, the simple style Madame la comtesse d'Artois was used instead.

Maria Theresa was one of the most disliked figures at the French court of the time, although she avoided the worst of the abuse directed at her sister-in-law Marie Antoinette. The Count of Mercy-Argenteau, who corresponded with Holy Roman Empress Maria Theresa regarding Marie Antoinette, said that she was silent and interested in absolutely nothing.[1]

Maria Theresa was not regarded as a beauty at Versailles, but her complexion was generally admired. She was a cousin of the famous Princess Marie Louise of Savoy, Princess of Lamballe, a great friend of Marie Antoinette. She was also a cousin of the Prince of Condé, who would later be instrumental in leading a large counter-revolutionary army of émigrés.

Roughly a year after Maria Theresa's arrival at Versailles, she became pregnant with her first child, Louis Antoine, Duke of Angoulême, the first child of the new royal generation. The next year she gave birth to a daughter Sophie, who was known as Mademoiselle as the most senior unmarried princess at court. She died at the age of six in 1783. Her second son, Charles Ferdinand, Duke of Berry, was born in 1778. Her last child, Marie Thérèse d'Artois, presumably named after her mother, died while the court was at Choisy-le-Roi at the age of just 6 months.

Maria Theresa fled France with her husband shortly after the storming of the Bastille (14 July 1789), which marked the beginning of the French Revolution. Some time after, she took refuge in her homeland of Savoy. She died in exile at Graz, (Austria), in 1805. Because she died before her husband became king of France, she remained Countess of Artois. She was buried in the Imperial Mausoleum next to Graz Cathedral.