Princess Marie Adélaïde of Savoy (6 December 1685 – 12 February 1712) was the wife of Louis, Dauphin of France, Duke of Burgundy. She was the eldest daughter of Duke Victor Amadeus II of Savoy and of Anne Marie d'Orléans. Her betrothal to the Duke of Burgundy in June 1696[1] was part of the Treaty of Turin, signed on 29 August 1696. She was the mother of the future King Louis XV of France. Styled as Duchess of Burgundy after her marriage, she became Dauphine of France upon the death of her father-in-law, Le Grand Dauphin, in 1711. She died of measles in 1712, followed by her husband a week later.

Born at the Royal Palace of Turin in December 1685, Marie Adélaïde was the eldest daughter of Victor Amadeus II, Duke of Savoy since 1675,[2] and his French wife Anne Marie d'Orléans, a niece of Louis XIV, and the daughter of Philippe I, Duke of Orléans and of Henrietta of England. Her birth nearly cost her sixteen-year-old mother her life.[3] As a female, she was not eligible to inherit the duchy of Savoy due to salic law. Her grandmother Marie Jeanne of Savoy and the Prince of Carignan acted as godparents.[4] Marie Adélaïde enjoyed a particularly close relationship with her grandmother as well as her mother who, despite protocol, was raising her children herself, which was quite unusual among royalty during the era.[5] As children, she and her sister Maria Luisa frequented the Vigno di Madama outside Turin, and paid weekly visits to their grandmother at the Palazzo Madama in Turin.[6] 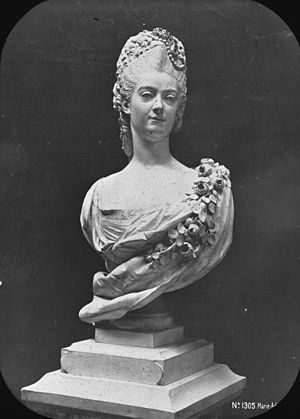 The marriage of the princess came as a result of the Treaty of Turin signed on 29 August 1696. This treaty between her father and Louis XIV agreed that her father would support France in the Nine Years' War.[7] Her father's dominions had been ravaged during the war.

Victor Amadeus had first proposed Marie Adélaïde as a candidate for marriage with the Archduke Joseph, but Emperor Leopold I had declined because of their young age.[8] The Treaty of Turin was negotiated under the influence of the Maréchal de Tessé who suggested that Marie Adelaïde be sent to France to perfect her education before marrying the French prince.[9]

Upon her arrival in France, Louis XIV, who had come to greet her, met her in Montargis on 4 November 1696,[10] and was quite pleased with "the Princess".[11] Because of her extreme youth, the marriage did not take place immediately and, instead, three days a week, she was a pupil at the Maison royale de Saint-Louis, the girls school Madame de Maintenon had founded in 1684 in Saint-Cyr, in the vicinity of Versailles.

On 6 December 1697, on her twelfth birthday, Princess Marie Adelaïde of Savoy was formally married to the Duke of Burgundy in the Palace of Versailles. The event took place after the signing of the Treaty of Ryswick which ended the Nine Years' War. Her husband was the eldest son of Le Grand Dauphin and Maria Anna Victoria of Bavaria.[12] 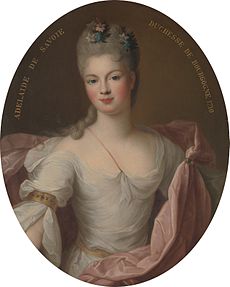 The new Duchess of Burgundy had a close relationship with the king and with Madame de Maintenon. Her arrival in Versailles was described "like a breath of fresh air," reviving the dull court.[13] She also maintained an ongoing correspondence with her parents and grandmother back in Savoy.

She used her influence over the aging king to prevent her political enemies from furthering their causes. This group, known as the cabale de Meudon, devoted themselves to her father-in-law, hoping to secure themselves in his expected reign upon the death of Louis XIV. Her great enemy was the Duchess of Bourbon, a legitimated daughter of Louis XIV and his mistress, Madame de Montespan. The Duchess of Bourbon wanted her daughter Mademoiselle de Bourbon to wed Charles, Duke of Berry, youngest son of the Grand Dauphin. To maintain her influence over her grandfather-in-law, the Duchess of Burgundy organized Berry's marriage to Marie Louise Élisabeth d'Orléans, the eldest daughter of Philippe d'Orléans and of his wife Françoise Marie de Bourbon.[14] The influential Marie Adélaïde also brought about the disgrace of Louis Joseph, Duke of Vendôme, the great military man of the era.[15]

The Duchess of Burgundy gave birth to her first child in 1704. The child, a short-lived boy, was given the title Duke of Brittany[16] before his death in 1705. Marie Adélaïde bore two more children in 1707 and 1710. Her youngest son, the only child to survive beyond childhood, later became King Louis XV of France. 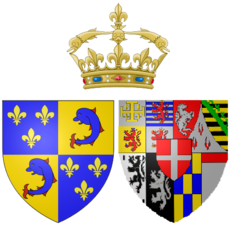 Arms of Marie Adélaïde as Dauphine of France

In early April 1711, her father-in-law Le Grand Dauphin caught smallpox and died on 14 April at the Château de Meudon.[17] Upon the death of Le Grand Dauphin, Marie Adélaïde's husband became Dauphin of France and she Dauphine of France.

The mourning court traveled to Fontainebleau in February 1712. At Fontainebleau, Marie Adélaïde caught a fever which escalated in measles.[18] Having been bled and given emetics, she died in Versailles at the age of 26. Louis XIV and Madame de Maintenon were plunged into sadness. Madame later said that Marie Adélaïde was one of the only two persons Louis XIV had ever truly loved in his life, the other being Anne of Austria, the king's mother. After the Dauphine's death, the royal family moved to Marly to avoid the spread of infection. It was at Marly that the Dauphin himself died six days later, having caught the measles from his wife.[19]

The couple was buried together at the Basilica of Saint Denis on 23 February 1712.[20] Their son, the Duke of Brittany succeeded as Dauphin, but he died the following March from the measles. The only child to survive the epidemic was the future Louis XV who was locked inside his apartments with his governess Madame de Ventadour to avoid being bled to death by doctors like his elder brother had been. Madame de Ventadour was renowned for having saved the infant Louis XV's life. Louis XV subsequently named his fourth daughter Marie Adélaïde in his mother's honour.[21]

The Dauphine was the subject of a statue held at the Louvre in which she posed as the Roman goddess Diana which was crafted by Antoine Coysevox in 1710.

Media related to Marie Adélaïde of Savoy at Wikimedia Commons