From Infogalactic: the planetary knowledge core
Jump to: navigation, search
Not to be confused with Maria Luisa of Savoy.

Princess Maria Teresa of Savoy-Carignan (Marie Thérèse) (8 September 1749 – 3 September 1792) was a member of a cadet branch of the House of Savoy. She was married at the age of 17 to Louis Alexandre de Bourbon-Penthièvre, Prince de Lamballe, the heir to the greatest fortune in France. After her marriage, which lasted a year, she went to court and became the confidante of Queen Marie Antoinette. She was killed in the massacres of September 1792 during the French Revolution. 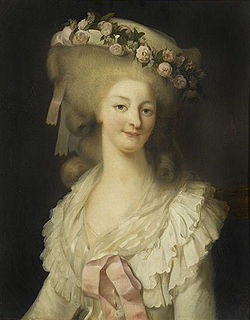 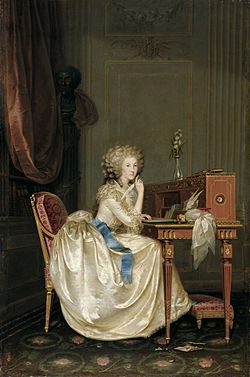 Princess of Lamballe 1788 by Anton Hickel at the Liechtenstein Museum, Vienna

Marie Thérèse was born in Turin. Her father was Louis Victor, Prince of Carignano, a maternal grandson of Victor Amadeus II of Sardinia and his mistress Jeanne d'Albert de Luynes.

Her mother, Landgravine Christine of Hesse-Rheinfels-Rotenburg, was the daughter of Ernest Leopold, Landgrave of Hesse-Rotenburg. Her aunts included, Polyxena of Hesse-Rheinfels-Rotenburg, the wife of Charles Emmanuel III of Sardinia (Victor Amadeus III was her first cousin) and Caroline, Princess of Condé and wife of Louis Henri, Duke of Bourbon. Louis Joseph, Prince of Condé was another first cousin who was at the French court.[1]

In 1768, at the age of nineteen, Marie Thérèse became a widow when her husband died of a venereal disease[citation needed] at the Château de Louveciennes. She inherited her husband's considerable fortune, making her wealthy in her own right.

She lived at the Hôtel de Toulouse in Paris, and at the Château de Rambouillet. On 4 January 1769, there was an announcement of the marriage of Marie Thérèse's sister-in-law Mademoiselle de Penthièvre, heiress to the greatest fortune in France, to the young Philippe d'Orléans, duc de Chartres, an old friend of the late prince de Lamballe.

The princesse de Lamballe was present at every ceremony, and the new Dauphine, to whom she was presented, was charmed with her and overwhelmed her with attentions which the spectators did not fail to notice. More than one saw even then the dawn of an intimacy which later was to give so much trouble to the two friends.

The "Gazette de France" mentions Madame de Lamballe's presence in the chapel at high mass on Holy Thursday, at which the king was present accompanied by the royal family, the Dukes of Bourbon and Penthièvre. In May, she went to Fontainebleau, and was there presented by the king to her cousin, the future Countess of Provence, attending the supper after. She was present at the birth of the future Louis-Philippe of France in Paris in October 1773.

In September following the accession of her husband to the throne in May 1774, Queen Marie Antoinette appointed Marie Thérèse "Superintendent of the Queen's Household", the highest rank possible for a lady-in-waiting at Versailles. Her pre-eminence in courtly high society would eventually be eclipsed by that of Yolande de Polastron, duchesse de Polignac, who arrived at Versailles in 1775.

Marie Thérèse was by nature reserved and there was never any gossip about her private life. However, in popular anti-monarchist propaganda of the time, she was regularly portrayed in pornographic pamphlets, showing her as the queen's lesbian lover to undermine the public image of the monarchy.[2]

The princesse de Lamballe accompanied the royal family to the Tuileries Palace after the Women's March on Versailles in October 1789. In Paris, her salon served as a meeting place for the queen and the members of the National Constituent Assembly, many of whom the queen wished to win over to the cause of the Bourbon Monarchy.[3]

During her stay at a house she rented in the Royal Crescent, Bath,[4] Great Britain in 1791 to appeal for help for the French royal family, the princess wrote her will, since she feared death upon returning to Paris. Nonetheless, she did return out of loyalty to Marie Antoinette. She went to the Tuileries, and continued her services to the queen until the attack on the palace on 10 August 1792, when the royal family took refuge in the Legislative Assembly, and was later imprisoned in the Temple, after the Legislative Assembly was taken.[5] 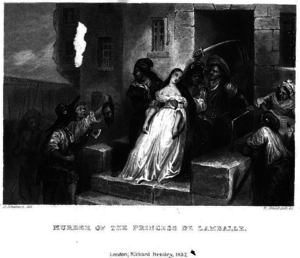 The murder of Lamballe 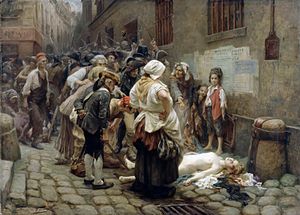 On 19 August, she and the Marquise de Tourzel, governess to the royal children, were separated from the royal family and transferred to the La Force prison.[6] On 3 September, she was brought before a hastily assembled tribunal which demanded she "take an oath to love liberty and equality and to swear hatred to the King and the Queen and to the monarchy".[7] She agreed to the swear to liberty but refused to denounce the King, Queen, and monarchy, upon which her trial summarily ended with the words, "emmenez madame" ("Take madame away"). She was immediately taken to the street and thrown to a group of men who killed her within minutes.[8][9]

Some reports allege that she was raped and that her breasts were cut off, in addition to other bodily mutilations,[10][11] and that her head was cut off and stuck on a pike. Other reports say that it was brought to a nearby café where it was laid in front of the customers, who were asked to drink in celebration of her death.[10] Other reports state that the head was taken to a barber in order to dress the hair to make it instantly recognizable,[11] though this has been contested.[9] Following this, the head was replaced upon the pike and was paraded beneath Marie Antoinette’s window at the Temple.[12]

Those who were carrying it wished the queen to kiss the lips of her favourite, as it was a frequent slander that the two had been lovers. The head was not allowed to be brought into the building.[12] In her historical biography, Marie Antoinette : The Journey Antonia Fraser claims that the queen did not actually see the head of her long-time friend, but was aware of what was occurring, stating, "...the municipal officers had had the decency to close the shutters and the commissioners kept them away from the windows...one of these officers told the King '..they are trying to show you the head of Madame de Lamballe'...Mercifully, the Queen then fainted away".[12]

Five citizens of the local section in Paris delivered her body (minus her head which was still being displayed on a pike) to the authorities shortly after her death. Royalist accounts of the incident claimed her body was displayed on the street for a full day. Her body (like that of her brother-in-law Philippe Égalité) was never found, which is why it is not entombed in the Orléans family necropolis at Dreux.[13][14] According to Madame Tussaud, she was ordered to make the death mask.[15] 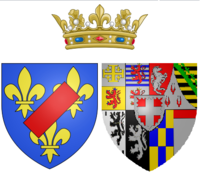 Arms of Maria Luisa of Savoy as Princess of Lamballe