Princess Mary of Great Britain (5 March 1723 – 14 January 1772) was the second-youngest daughter of King George II and Landgravine of Hesse-Kassel as the wife of Landgrave Frederick II. 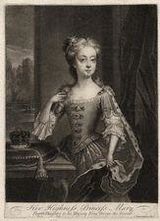 Princess Mary was born at Leicester House, Westminster, London.[2] Her father was the Prince of Wales, later King George II. Her mother was Caroline of Ansbach, daughter of Johann Friedrich, Margrave of Brandenburg-Ansbach.[2]

Her father succeeded, as George II, on 11 June 1727, and she became HRH The Princess Mary.

They married by proxy at the Chapel Royal of St. James's Palace in London on 8 May, then in person on 28 June 1740 at Kassel.[2] The marriage was unhappy, and Frederick was said to be "brutal" and "a boor". In late 1746, Mary made an extended trip to Britain to escape his maltreatment. The couple separated in 1754 on Frederick's conversion to Roman Catholicism. They had four sons, three of whom survived to adulthood.[3] In 1756, Mary moved to Denmark, to take care of the children of her sister, Louise of Great Britain, who had died in 1751. She took her children with her; they were raised at the royal court and her sons were married to Danish princesses. Her husband succeeded his father as Landgrave of Hesse-Kassel in 1760, and so Mary was technically Landgravine consort for the last twelve years of her life, despite her estrangement from her husband.

On 30 August 1727, as a child of the sovereign, Mary was granted use of the arms of the realm, differenced by a label argent of three points, each bearing a canton gules.[5]