From Infogalactic: the planetary knowledge core
Jump to: navigation, search
This article is about the British Royal title. For the current holder, see Anne, Princess Royal.

Princess Royal is a style customarily (but not automatically) awarded by a British monarch to his or her eldest daughter.[1] Holders retain the style for life, so a princess cannot receive the style during the lifetime of another Princess Royal. Queen Elizabeth II never held the title as her aunt, Princess Mary, was in possession of the title. 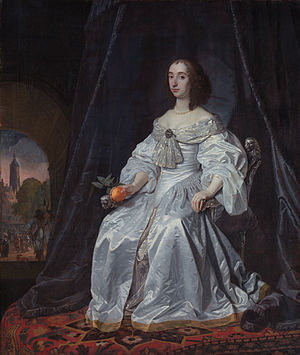 There have been seven Princesses Royal. Princess Anne is the current Princess Royal.[2]

Princess Louisa Maria (1692–1712), the last daughter of King James II (died 1701), born after he lost his crown in the Glorious Revolution of 1688-1689, was considered to be Princess Royal during James's exile by Jacobites at Saint-Germain-en-Laye and was so called by Jacobites, even though she was not James's eldest living daughter at any time during her life.[3]

The following is a complete list of women formally styled Princess Royal:

Princess Royal was one of the GWR 3031 Class locomotives that were built for and run on the Great Western Railway between 1891 and 1915. The LMS Class 8P "Princess Royal" 4-6-2 was a type of express passenger locomotive built between 1933 and 1935 by the London Midland & Scottish Railway

Princess Royal is an abandoned town in the Western Australian Goldfields, named for Victoria, Princess Royal, daughter of Queen Victoria.

Five ships of the Royal Navy have been named HMS Princess Royal.

"The Princess Royal" is also the name of a folk tune from the British Isles, and of a morris dance performed to that tune.[6]

In the Thai monarchy, the style of Sayamboromrajakumari (Thai: สยามบรมราชกุมารี; rtgs: Sayam boromma ratcha kumari) for Princess Sirindhorn of Thailand is similar to the position of Princess Royal.[7]