Princess Thyra of Denmark, Danish pronunciation: [ˈtyːʁə], (29 September 1853 – Gmunden, 26 February 1933) was the youngest daughter of Christian IX of Denmark and Louise of Hesse-Kassel. In 1878 she married Ernest Augustus, the exiled heir to the Kingdom of Hanover. As the Kingdom of Hanover had been annexed by Prussia in 1866, she spent most of her life in exile with her husband in Austria.

Thyra was the sister of Frederik VIII of Denmark, Queen Alexandra of the United Kingdom, George I of Greece and Empress Maria Feodorovna of Russia. 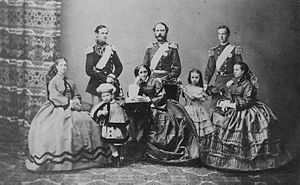 Christian IX of Denmark with his wife and their six children in 1862. Left to right: Dagmar, Frederick, Valdemar, Queen Louise, Christian IX, Thyra, George and Alexandra.

Princess Thyra was born on 29 September 1853 at the Yellow Palace in Copenhagen as the third daughter and fifth child of Prince Christian and Princess Louise of Denmark. Her family had been relatively obscure until her father, Prince Christian of Schleswig-Holstein-Sonderburg-Glücksburg, was chosen with the consent of the great powers to succeed his childless distant cousin, Frederick VII, to the Danish throne. Just two months before Thyra's birth, the new Act of Succession had been passed and Prince Christian given the title Prince of Denmark. 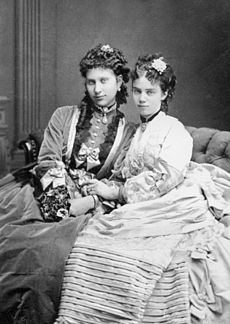 Princess Thyra of Denmark with her sister-in-law Louise of Sweden.

In 1863, when Thyra was 10 years old, King Frederick VII died, and her father succeeded to the throne of Denmark as King Christian IX. Earlier the same year, her brother Vilhelm had been elected King of Greece, and her sister Alexandra had married Edward, Prince of Wales. In 1866, her other sister Dagmar married the tsarevich of Russia, Alexander.

Thyra was an attractive and gentle young woman, with dark hair and dark blue eyes, and Queen Louise wanted her youngest daughter to make a good marriage as her elder daughters had. Thyra's first suitor was King Willem III of the Netherlands, but as he was thirty-six years older than she was, she rejected him. He later married Emma of Waldeck and Pyrmont. Their daughter became Wilhelmina of the Netherlands and her descendants sit on the throne of the Netherlands.

In her youth, Thyra had fallen in love with Vilhelm Frimann Marcher, a Lieutenant in the Cavalry, which resulted in a pregnancy.[1] Her brother George I of Greece suggested that she have the baby in Athens to avoid scandal; the Danish press was told Thyra had been taken ill with jaundice.[1] She gave birth to a girl, Maria, on 8 November 1871 at Schloss Glücksburg, who was adopted by Rasmus and Anne Marie Jørgensen of Odense shortly after birth and renamed Kate; she married in 1902 Frode Pløyen-Holstein and died in 1964.[2] Marcher killed himself on 4 January 1872 after a confrontation with the King.[3] 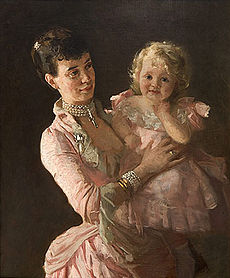 The Duchess of Cumberland with her daughter, Princess Olga.

On 21 December/22 December 1878, she married Crown Prince Ernest Augustus of Hanover, 3rd Duke of Cumberland and Teviotdale, at the chapel of Christiansborg Palace in Copenhagen. Ernst Augustus was the eldest child and only son of King George V of Hanover and his wife, Princess Marie of Saxe-Altenburg.

Ernest Augustus had been born as a Crown Prince of Hanover, but in 1866 his father had been deprived of his throne, when the Kingdom of Hanover was annexed by Prussia after siding with Austria in the Austro-Prussian War.

Thanks to her marriage, Thyra became Duchess of Cumberland and Teviotdale, and Duchess of Brunswick-Luneburg; although she was styled Crown Princess of Hanover, in pretense she was Queen Consort of Hanover because both her husband and late father-in-law (who died six months before her marriage) never renounced or abdicated his rights over the annexed Kingdom of Hanover.

Ernest Augustus died on 14 November 1923. Thyra survived her husband by nine years and died in Gmunden, Upper Austria, on 26 February 1933. 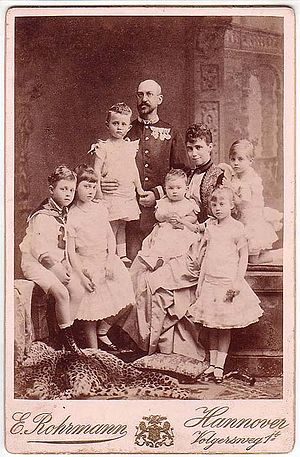 The Duke and Duchess of Cumberland with their children.

The Duke and Duchess of Cumberland had six children: