Princess Victoria of Saxe-Coburg-Saalfeld (Marie Luise Victoire; 17 August 1786 – 16 March 1861) was a German princess and the mother of Queen Victoria of the United Kingdom.

Mary Louise Victoria (Marie Luise Viktoria) was born in Coburg on 17 August 1786 in the Holy Roman Empire of the German Nation. She was the fourth daughter and seventh child of Franz Frederick Anton, Duke of Saxe-Coburg-Saalfeld, and Countess Augusta of Reuss-Ebersdorf. She had a rough childhood growing up with her brothers and sisters. One of her brothers was Ernest I, Duke of Saxe-Coburg-Gotha, and another brother, Leopold, married, in 1816, Princess Charlotte of Wales, the only legitimate daughter of the future King George IV, and heiress presumptive to their British throne.

On 21 December 1803 at Coburg, she married (as his second wife) Charles, Prince of Leiningen (1763–1814), whose first wife, Henrietta of Reuss-Ebersdorf, was her aunt. Charles and Victoria had two children:

Through her first marriage, she is a direct matrilineal ancestor to various members of royalty in Europe, including Carl XVI Gustaf of Sweden, Felipe VI of Spain, and Constantine II of Greece.

The death of Princess Charlotte of Wales, the wife of Victoria's brother Leopold in 1817, prompted a succession crisis, and, with Parliament offering a financial incentive, three of Charlotte's uncles, sons of George III, were prepared to marry. One of Charlotte's uncles, Prince Edward, Duke of Kent and Strathearn (1767–1820) proposed to Victoria and she accepted. The couple were married on 29 May 1818 at Amorbach, and again, on 11 July 1818, at Kew, the second ceremony being a joint ceremony at which Edward's brother, the Duke of Clarence, later King William IV, also married his wife, Princess Adelaide of Saxe-Meningen. Shortly after the marriage, the pair moved to Germany, where the cost of living would be cheaper. Soon after, Victoria became pregnant, and the Duke and Duchess, determined to have their child born in England, raced back, arriving at Dover on 23 April 1819, and moved into Kensington Palace, where she soon gave birth to a daughter: 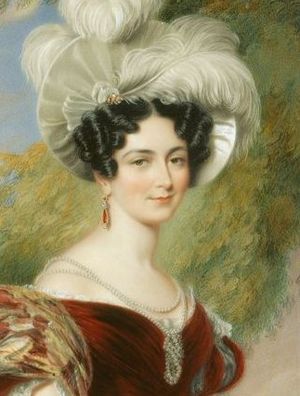 The Duchess of Kent by Sir George Hayter in 1835

The Duke of Kent died suddenly of pneumonia in January 1820, six days before his father, King George III. The widow Duchess had little cause to remain in the United Kingdom, not speaking the language and having a palace at home in Coburg, where she could live cheaply on the incomes of her first husband. However, the British succession at this time was far from assured – of the three brothers older than Edward, the new king, George IV, and the Duke of York were both estranged from their wives (both wives being past childbearing age) and the third, the Duke of Clarence (the future William IV) had yet to produce any surviving children with his wife. The Duchess decided that she would do better by gambling on her daughter's accession than by living quietly in Coburg, and sought support from the British government, having inherited her second husband's debts. After the death of Edward and his father, the young Princess Victoria was still only third in line for the throne, and Parliament was not inclined to support yet another impoverished royal. The Duchess of Kent was allowed a suite of rooms in the dilapidated Kensington Palace, along with several other impoverished nobles. There she brought up Victoria, who would become Queen of the United Kingdom and Empress of India.

The Duchess was given little financial support from the Civil List. Parliament was not inclined to increase her income, remembering the Duke's extravagance. Her brother, Leopold, was a major support, since he had a huge income of fifty thousand pounds per annum for life, which Parliament allotted to him on his marriage to Princess Charlotte, as he was expected to become the consort of the monarch in due course; but, even after Charlotte's death, Parliament never revoked Prince Leopold's annuity.

In 1831, with George IV dead and the new king, William IV, still without legitimate issue, the young princess' status as heir presumptive and the Duchess's prospective place as regent led to major increases in income. A contributing factor was Leopold's designation as King of the Belgians (he surrendered his British income on election) and the perceived impropriety in having the heir presumptive supported by a foreign sovereign. 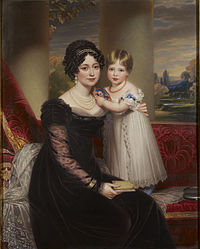 The Duchess of Kent with her daughter, the future Queen Victoria

The Duchess relied heavily on John Conroy, whom she engaged as her private secretary. Perhaps because of Conroy's influence, the relationship between the Duchess's household and William IV soon soured, with the Duchess regarding the king as an oversexed oaf.[1] William was denied access to his young niece as much as the Duchess dared. She further offended the King by taking rooms in Kensington Palace that the King had reserved for himself. Both before and during William's reign, she snubbed his illegitimate children, the FitzClarences. All of this led to a scene at a dinner in 1836 when the King, again feeling offended by the Duchess and Conroy, expressed hope that he would live long enough to render a regency for Victoria unnecessary, and decried the influence on the heir presumptive by those around her.

Conroy had high hopes for his patroness and himself: he envisioned Victoria succeeding the throne at a young age, thus needing a regency government, which, following the Regency Act of 1831, would be headed by the Princess's mother (who had already served in that capacity in Germany following the death of her first husband). As the personal secretary of the Duchess, Conroy would be the veritable "power behind the throne". He did not count on Victoria's uncle, William IV, surviving long enough for Victoria to reach her majority. He had cultivated her mother as his ally, and ignored and insulted Victoria. Now he had no influence over her, and thus tried to force her to make him her personal secretary upon her accession. This plan, too, backfired, as Victoria came to associate her mother with Conroy's schemes, for pressuring her to sign a paper declaring Conroy her personal secretary. When Victoria became queen, she relegated the Duchess to separate accommodations, away from her own. 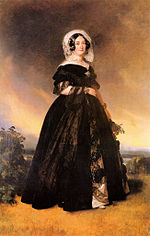 Victoria, dowager duchess of Kent in a portrait by Winterhalter

When the Queen's first child, the Princess Royal, was born, the Duchess of Kent unexpectedly found herself welcomed back into Victoria's inner circle. It is likely that this came about as a result of the dismissal of Baroness Lehzen at the behest of Victoria's husband (and the Duchess's nephew), Prince Albert. Firstly, this removed Lehzen's influence, and Lehzen had long despised the Duchess and Conroy, suspecting them of an illicit affair. Secondly, it left the Queen wholly open to Albert's influence, and he likely prevailed upon her to reconcile with her mother. Lastly, Conroy had by now exiled himself to the continent, and that divisive influence was removed. The Duchess's finances, which had been left in shambles by Conroy, were revived thanks to her daughter and her daughter's advisors. She became a doting grandmother, by all accounts, and was closer to her daughter than she ever had been.[2]

There has been some speculation, not only that the Duchess and Conroy were lovers, but that the Duchess had earlier been unfaithful to the Duke of Kent and that Victoria was not his daughter. This has been promoted most prominently by William and Malcolm Potts' 1995 book Queen Victoria's Gene[citation needed]. Those who promote this position point to the absence of porphyria in the British Royal Family among the descendants of Queen Victoria - it had been widespread before her; not to mention the rise of haemophilia, unknown in either the Duke's or Duchess's family, among the best documented families in history. Victoria herself was puzzled by the emergence of the disease, given its absence in either family.

In practice, this would have required the Duchess's lover to be haemophiliac – an extremely unlikely survival, given the poor state of medicine at the time.[3] Actual evidence to support this theory has not arisen, and haemophilia occurs spontaneously through mutation in at least 30% of cases.[4] Queen Victoria has also been said by some to have a strong resemblance to her Hanoverian relatives, particularly George IV.

John Röhl's book, Purple Secret, documents evidence of porphyria in Victoria, the Princess Royal's daughter Charlotte and her grand daughter, Feodore. It goes on to say that Prince William of Gloucester was diagnosed with the disease shortly before his own death in a flying accident. [5] (although it should be noted that he is also descendant of George III through Queen Victoria's uncle, the Duke of Cambridge) 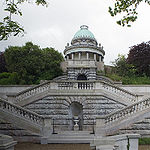 The Duchess of Kent's Mausoleum at Frogmore

The Duchess died on 16 March 1861, at the age of 74. She is buried in the Duchess of Kent's Mausoleum at Frogmore, Windsor Home Park, near to the royal residence Windsor Castle.

Queen Victoria and Albert dedicated a window in the Royal Chapel of All Saints in Windsor Great Park to her memory.[6]

The Queen was much affected by her mother's death. It was the start to a disastrous year, which would end with Albert's death.

Princess Victoria of Saxe-Coburg-Saalfeld was portrayed by Alison Leggatt in the ATV drama Edward the Seventh, by Penelope Wilton in the 2001 television serial Victoria and Albert,[7] and by Miranda Richardson in the 2009 film The Young Victoria.[8]