From Infogalactic: the planetary knowledge core
Jump to: navigation, search
For other Princesses Viktoria or Victoria of Prussia, see Princess Victoria (disambiguation).

Princess Viktoria of Prussia (Friederike Amalia Wilhelmine Viktoria) (12 April 1866 – 13 November 1929) was the second daughter of Frederick III, German Emperor and his wife Victoria, Princess Royal, a daughter of Queen Victoria. To the public she was always Princess Viktoria, and in the family she was called Moretta or Young Vicky.

An official portrait of Princess Viktoria of Prussia.

Viktoria was baptised on her grandmother's birthday 24 May 1866 at Potsdam Palace. Like her sisters, Princess Sophie and Princess Margaret, Viktoria was devoted to her mother and embraced English ways.

In 1881, Prince Alexander of Battenberg, who had been selected as sovereign Prince of Bulgaria since 1879, visited the Prussian court at the behest of Viktoria's mother.[1] As her mother and grandmother recommended Alexander (or 'Sandro') as a possible match, Viktoria quickly caught their enthusiasm and fell in love with him. Sandro, like his brothers, was considered exceedingly attractive, as he was lean and dashing.[2] Viktoria on the other hand was not a pretty girl, being described by one as "a kind of wild, Scandinavian woman, with much of her mother's impetuosity and a streak of her brother Willy's eccentricity".[3]

Though her parents wanted the couple to marry, Viktoria's grandfather, Emperor Wilhelm I and his chancellor, Otto von Bismarck were opposed to the match: they were afraid that if Viktoria married Sandro, Tsar Alexander III would be offended, as Alexander's actions in Bulgaria were irritating the Russians. As Bismarck was kept abreast of the affair by his spies, a vicious and bitter war of words was fought, but eventually, Viktoria's parents had to back down, and the young princess gave up all hope of marrying Sandro.

Marriage to Adolf of Schaumburg-Lippe

Despite being technically on the German side in World War I, Viktoria was very sympathetic to the British cause. After the war, she met her cousin, George V, King of Great Britain and expressed the wish that they would all be friends again soon. George told her he did not think this would be possible for a great many years. 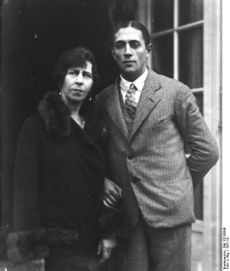 Princess Viktoria of Prussia with her second husband, Alexander Zoubkoff, 1927.

On 19 November 1927, despite the strong disapproval of her brothers and sisters,[4] Viktoria married Alexander Zoubkoff (25 September 1901 – 28 January 1936), a Russian refugee described as a "dancer",[5] who was 35 years her junior. By this time her finances were in a precarious state, and Zoubkoff proceeded to squander much of the little money that remained on his own private amusements, rarely returning to the matrimonial home.[6] Eventually Viktoria was obliged to call in the receivers and to sell off the contents of the Schaumburg Palace by auction, the sale being conducted by the Cologne auctioneers M. Lempertz.[7] The sale attracted far less interest than had been anticipated, and The Times described much of the bidding as "spiritless"; it was estimated that the proceeds from the auction would have covered only one-third of her debts (which were reported to have been 900,000 marks, or £45,000 sterling).[8] After leaving the Schaumburg Palace, she moved into a single furnished room in the Bonn suburb of Mehlem. She was on the point of divorcing Zoubkoff on the grounds that his behaviour had resulted in his expulsion from Germany, he was unable to maintain her, and that "conjugal relations did not exist".,[9] but only a few days after this announcement became public she fell seriously ill with pneumonia, dying in a Bonn hospital on 13 November 1929.