The Princeton Tigers are the athletic teams of Princeton University. The school sponsors 31 varsity sports. The school has won several NCAA national championships, including one in men's fencing, six in men's lacrosse, three in women's lacrosse, and eight in men's golf. Princeton's men's and women's crews have also won numerous national rowing championships. The field hockey team made history in 2012 as the first Ivy League team to win the Division I NCAA Championship in field hockey.

Princeton's basketball team is perhaps the best-known team within the Ivy League. It is nicknamed the "perennial giant killer," a nickname that it acquired during Pete Carril's coaching career from 1967–1996. Its most notable upset was the 1996 defeat of defending NCAA champion UCLA in the tournament's opening round, Carril's final collegiate victory. In 1989, the team almost became the only #16 seed to win, losing to Georgetown 50-49,[1] after leading 29–21 at the half. During that 29-year span, Pete Carril won thirteen Ivy League championships and received eleven NCAA berths and two NIT bids. Princeton placed third in the 1965 NCAA Tournament and won the NIT championship in 1975. The deliberate "Princeton offense" is a legacy of his coaching career. It is employed by a number of other collegiate basketball teams.

From 1992–2001, a nine-year span, the men's basketball team entered the NCAA tournament four times. Notably, the Ivy League has never had an at-large entry in the NCAA tournament. For the last half-century, Princeton and the University of Pennsylvania have traditionally battled for men's basketball dominance in the Ivy League; Princeton had its first losing season in 50 years of Ivy League basketball in 2005. Princeton tied the record for fewest points in a Division I game since the 3-point line started in 1986–87 when they scored 21 points in a loss against Monmouth University on December 14, 2005.

The 1924–25 team was retroactively named the national champion by the Helms Athletic Foundation and the Premo-Porretta Power Poll.[2]

Princeton's Varsity Women's basketball program is the strongest in the Ivy League, carrying on the tradition of the men's championship basketball program. At no time has the women's team been better than it currently is in 2015, with a 31-0 record, a national NCAA Division 1 ranking among the top 25 teams, and entering the field of 32 teams remaining in the 2015 NCAA Women's Division I Basketball Tournament. Courtney Banghart, a Dartmouth graduate, is in her eighth season as the Tigers' highly esteemed head coach.[3] 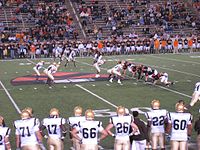 The football team has competed since 1869 and played in the first game against Rutgers University. They have won 24 national championships when the school competed in what is now known as the FBS.[4] Twenty-one former players have been inducted into the College Football Hall of Fame.

The first football game played between teams representing American colleges was an unfamiliar ancestor of today's college football because it was played under soccer-style London Football Association rules. The game, between Rutgers College (now Rutgers University) and the College of New Jersey (now Princeton University), took place on November 6, 1869 at College Field (now the site of the College Avenue Gymnasium at Rutgers University) in New Brunswick, New Jersey. Rutgers won by a score of six "runs" to Princeton's four. The 1869 game between Rutgers and Princeton is notable because it is the first documented game of any sport called "football" between two American colleges. It is also noteworthy because it occurred two years before a codified rugby game would be played in England. The Princeton/Rutgers game was significantly different from American rules football today but, nonetheless, it was the first inter-collegiate football contest in the United States. Another similar game took place between Rutgers and Columbia University in 1870 and a third notable game took place between Tufts University and Harvard University in 1875. The popularity of intercollegiate competition in football would spread throughout the country shortly thereafter.[citation needed]

Since 1901, however, they have 4 consensus national championships, which ranks as tied for 11th all time.[citation needed]

Princeton's football helmets are also the basis for Michigan Wolverines football team's famed winged helmets, as introduced by Fritz Crisler, the coach at Princeton before he was hired as the coach of The University of Michigan.

The women's golf team was founded as a club sport in 1978, coached by Betty Whelan. A group called "Friends of Women's Golf" began fundraising immediately, and the group began lobbying for inclusion as a varsity sport. After ten years of being denied varsity status by the university, representatives from the team contacted the ACLU asking for assistance and raising the possibility of a lawsuit under the protections of Title IX of the Civil Rights Act. In 1991, the university committed to supporting a varsity women's golf program.[7] After becoming a varsity team, women's golf too the Northeast championships in 1995, and Mary Moan won the first Ivy League individual championship in 1997. The team won its first Ivy League title in 1999.[8]

The Princeton Tigers women's lacrosse team has enjoyed much success, winning 3 NCAA championships, tied for 3rd place with Virginia in the number of NCAA championships won.They won NCAA division 1 titles in 1994, 2002, and 2003. Their record in the NCAA tournament finals is 3-4.

Rowing was introduced to Princeton in 1870 by a handful of undergraduates who bought two old boats with their own funds and formed an impromptu "navy" on the Delaware and Raritan Canal.[10] The construction of Lake Carnegie in 1906 enabled the sport to expand and laid the foundation for today's rowing program at Princeton. More recently, an $8 million upgrade and expansion of the existing boathouse in 2000 formed Shea Rowing Center, one of the finest rowing facilities in the country.

With 150 athletes, 60 rowing shells, and 12 coaches, trainers, and boat riggers, crew is the largest varsity sport at Princeton, and one of the most successful. In recent years, from 2000 through 2010, Princeton varsity crews (both men's and women's) won a total of 14 Eastern Sprints, IRA (national), and NCAA championships, as well as two international events at Henley Royal Regatta.

The Princeton boathouse is often a summer base for U.S. national teams in training, and many Princeton rowers and coaches have gone on to compete at the World Rowing Championships and the Olympics.

In 2004, the women's soccer team went to the Final Four in the NCAA tournament. It became the only Ivy League team (men's or women's) to do so in a 64-team tournament.[citation needed]

Princeton's men's and women's squash teams have earned a strong reputation during the past decade.

Led by Twitter celebrity, Rolls Boyce, the women have dominated the past decade.

The men's volleyball program achieved varsity status in 1997 - though it had competed for two decades as a club sport before then - and competes in the Eastern Intercollegiate Volleyball Association.[12] From their inaugural varsity season until 2009, the team was coached by Glenn Nelson, who was also the head coach of the Princeton women's volleyball team.

The Tigers have the honor of being the only team since the formation of the EIVA in 1988 to win the EIVA championship and advance to the NCAA Men's National Collegiate Volleyball Championship, with every other title having been won by the Penn State Nittany Lions. The Tigers bested the Nittany Lions in the 1998 EIVA semifinals, then when on to beat Rutgers-Newark, thus winning the 1998 EIVA championship and automatically gaining a berth in the NCAA tournament.

Since then, Princeton has failed to obtain the championship but has nevertheless remained competitive in its conference. Led by head coach Sam Shweisky,[13] the Tigers have had consistent success in the past five years, boasting a positive record for every year of his tenure.[14] Furthermore, Princeton has had victories over five ranked opponents in that time, compared to only three in the previous three years.[15]

The Wrestling tigers give out end of the season team awards for the following categories:[17]

† The NCAA started sponsoring the intercollegiate golf championship in 1939, but it retained the titles from the 41 championships previously conferred by the National Intercollegiate Golf Association in its records.

The stadium is Princeton University Stadium, which replaced Palmer Stadium. Baseball is played at Bill Clarke Field. Basketball is played at Jadwin Gymnasium. Ice hockey is played at Baker Rink. Soccer is played at Roberts Stadium. Lacrosse is played at Class of 1952 Stadium. The men's and women's volleyball teams and the wrestling team compete at Dillon Gymnasium. All crews train at Shea Rowing Center and compete on Lake Carnegie. The Rugby Team plays at Rickerson Field on West Windsor Fields.

Top athletes of the decade