From Infogalactic: the planetary knowledge core
Jump to: navigation, search
For other uses, see Priory (disambiguation). 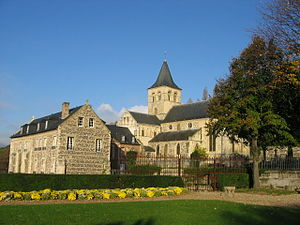 A priory is a monastery of men or women under religious vows that is headed by a prior or prioress. Priories may be houses of mendicant friars or religious sisters (as the Dominicans, Augustinians, Franciscans, and Carmelites, for instance), or monasteries of monks or nuns (as the Benedictines). Houses of canons regular and canonesses regular also use this term, the alternative being "canonry".

In pre-Reformation England, if an Abbey church was raised to cathedral status, the abbey became a Cathedral Priory. The bishop, in effect, took the place of the abbot, and the monastery itself was headed by a prior.

Priories first came to existence as subsidiaries to the Abbey of Cluny. Many new houses were formed that were all subservient to the abbey of Cluny and called Priories. As such, the priory came to represent the Benedictine ideals espoused by the Cluniac reforms as smaller, lesser houses of Benedictines of Cluny. There were likewise many conventual priories in Germany and Italy during the Middle Ages, and in England all monasteries attached to cathedral churches were known as cathedral priories.[1]

The Benedictines and their offshoots (Cistercians and Trappists among them), the Premonstratensians, and the military orders distinguish between conventual and simple or obedientiary priories.

Priory may also refer to schools operated or sponsored by the Benedictines, such as the Saint Louis Priory School or the Woodside Priory School. Priory is also used to refer to the geographic headquarters of several commanderies of knights.