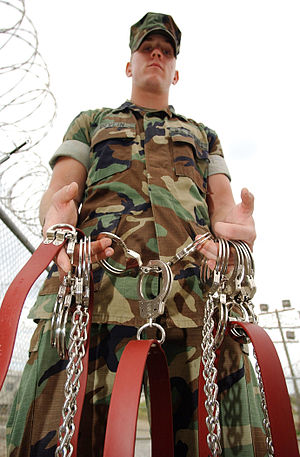 A prison officer (UK[1] and Ireland,[2] and the official English title in Denmark,[3] Finland,[4] and Sweden[5]), also known as corrections officer (New Zealand,[6] US[7][8]), correctional officer (Australia,[9] Canada,[10][11][12] Jamaica,[13] and US[14]), detention officer (US[15]) or penal officer (US[16]), is a person responsible for the supervision, safety, and security of prisoners in a prison, jail, or similar form of secure custody. Historically, terms such as jailer (also spelled jailor or gaoler), jail guard, prison guard, and turnkey[17] have also been used.

Corrections Officers are responsible for the care, custody, and control of individuals who have been arrested and are awaiting trial while on remand or who have been convicted of a crime and sentenced to serve time in a prison or jail. They are also responsible for the safety and security of the facility itself. Most officers are employed by the government of the jurisdiction in which they operate, though some are employed by private companies. Private Guard companies are not considered Law Enforcement, and as such, cannot statutorily carry firearms off-duty without a concealed weapons permit, unlike most state and county Corrections Officers. 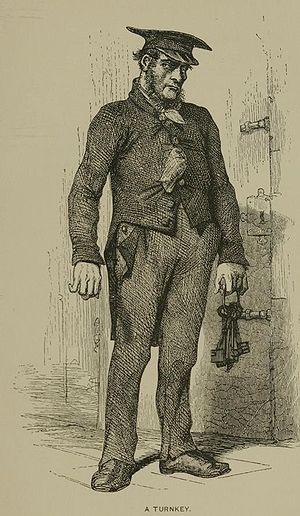 A turnkey of a Paris prison, 19th century

Prison officers must maintain order and daily operations of the facility and are responsible for the care, custody, and control of inmates. A correction officer has a responsibility to control inmates who may be dangerous, and that society themselves do not wish to accommodate. An officer must always prevent disturbances, assaults, and escapes by supervising activities and work assignments of inmates. Officers have a responsibility to protect the public from incarcerated criminals, protect fellow officers from inmates and protect inmates from other inmates at all times. An officer must be alert and aware of any and all movement taking place inside the facility. Prevention is one of the key components to an officer's duties. Officers can utilize prevention by routinely searching inmates and their living quarters for potential threats such as weapons or drugs. An officer must make their presence known at all times and remain assertive and refuse to back down. An officer must be a disciplinarian and enforce the rules and punish when rules are violated. Correction officers also must take full concern for the health and safety of the facility. Officers check for unsanitary conditions, fire hazards, and/or any evidence of tampering or damage to locks, bars, grilles, doors, and gates. Officers must screen all incoming and outgoing mail as well as all visitors as a prevention method for future issues that could cause risk to safety and security of the facilities, inmates and staff. Correction officers also must assist in transportation responsibilities that may include transfers to other facilities, medical appointments, court appearances and other approved locations. Correction officers may assist police officer's on/off duty depending on their peace officer status and jurisdiction.[18]

Corrections officers' training will vary from jurisdiction to jurisdiction as well as facility to facility depending on the legislated power given, the nature of the facilities, or even the socioeconomics of the region. Training may be provided by external agencies or at the facility with a peer-group or supervisor instructor.

Many jurisdictions have also, in recent years, expanded basic training to include: