The Progressive Party of 1912 was an American political party. It was founded by former President Theodore Roosevelt, after a split in the Republican Party between him and President William Howard Taft.

The party also became known as the Bull Moose Party after journalists quoted Roosevelt saying "I feel like a bull moose" shortly after the new party was formed.[1]

Birth of a new party

Roosevelt left office in 1909. He had selected Taft, his Secretary of War, to succeed him as presidential candidate, and Taft easily won the 1908 presidential election. Roosevelt became disappointed by Taft's increasingly conservative policies. Taft upset Roosevelt when he used the Sherman Anti-Trust Act to break up U.S. Steel. During his own presidency, Roosevelt had approved J.P. Morgan-owned U.S. Steel as a "good" trust.[2] They became openly hostile, and Roosevelt decided to seek the presidency.

Roosevelt entered the campaign late, as Taft was already being challenged by progressive leader Senator Robert La Follette of Wisconsin.

Roosevelt far outpolled Taft in the primary elections which were held in a few of the more progressive states. But Taft had worked far harder than TR to control the Republican Party's organizational operations and the mechanism for choosing its presidential nominee, the 1912 Republican National Convention. So, despite Roosevelt's last-minute attempt to block Taft's re-nomination, the party re-nominated Taft in June.[3] Before the final vote, Roosevelt had said that he would accept a presidential nomination from a new, "honestly elected", convention. He ordered pro-Roosevelt Republican convention delegates to abstain from voting, in rebuke of Taft's "steamroller tactics"... The next day, Roosevelt supporters met to form a new political party of their own. California governor Hiram Johnson became its chairman, and a new convention was scheduled for August.[4] Magazine publisher Frank A. Munsey provided $135,000 ; George W. Perkins, a director of U.S. Steel and Chairman of the International Harvester Company — one of the trusts Taft had attacked — gave $130,000 and became its executive secretary. Roosevelt's family gave $77,500 and others gave $164,000. The total was nearly $600,000, far less than the major parties.[5][6]

Roosevelt's ambitions to reclaim the Presidency suffered two setbacks in the interim.

First, not many Republicans joined his new party. Only 5 of the 15 "progressive" Republican Senators declared support for it. Republican Representatives, governors, committeemen, and the publishers and editors of Republican-leaning newspapers showed comparable reluctance. Many of Roosevelt's closest political allies supported Taft, including his son-in-law, Nicholas Longworth (though Roosevelt's daughter Alice stuck with her father, causing a permanent chill in her marriage). For men like Longworth, expecting a future of his own in Republican politics, bolting the party would have seemed tantamount to career suicide.

However, many independent reformers still signed up.

The Progressive convention and platform

Despite these obstacles, the August convention opened with great enthusiasm. Over 2,000 delegates attended, including many women. In 1912, neither the other Republican candidate, President W. H. Taft, nor the Democrat's nominee Woodrow Wilson, endorsed women's suffrage on the national level.[7] The famed suffragette and social worker Jane Addams gave a seconding speech for Roosevelt's nomination. However, Roosevelt insisted on excluding African-American Republicans from the South (whom he regarded as a corrupt and ineffective element); but, he did include black delegates from all other parts of the country.[8] Roosevelt further alienated white southern supporters on the eve of the election, by publicly dining with black people at a Rhode Island hotel.[9]

Roosevelt was nominated by acclamation, with Johnson as his running mate.

The main work of the convention was the platform, which set forth the new party's appeal to the voters. It included a broad range of social and political reforms advocated by progressives.[8][10] 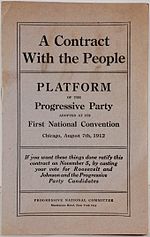 16-page campaign booklet with party platform of the Progressive Party

The platform's main theme was reversing the domination of politics by business interests, which allegedly controlled the Republicans' and Democrats' parties, alike. The platform asserted that: To destroy this invisible Government, to dissolve the unholy alliance between corrupt business and corrupt politics is the first task of the statesmanship of the day.[11]

To that end, the platform called for

In the social sphere the platform called for

The platform also urged states to adopt measures for "direct democracy", including:

Besides these measures, the platform called for reductions in the tariff, limitations on naval armaments by international agreement and improvements to inland waterways.

The biggest controversy at the convention was over the platform section dealing with trusts and monopolies such as Standard Oil. The convention approved a strong "trust-busting" plank, but Roosevelt had it replaced with language that spoke only of "strong National regulation" and "permanent active [Federal] supervision" of major corporations. This retreat shocked reformers like Pinchot, who blamed it on Perkins (a director of U.S. Steel). The result was a deep split in the new party that was never resolved.[8]

In general the platform expressed Roosevelt's "New Nationalism": a strong government to regulate industry, protect the middle and working classes, and carry on great national projects. This New Nationalism was paternalistic in direct contrast to Wilson's individualistic philosophy of "New Freedom".

Roosevelt also favored a vigorous foreign policy, including strong military power. Though the platform called for limiting naval armaments, it also recommended the construction of two new battleships per year, much to the distress of outright pacifists such as Jane Addams. 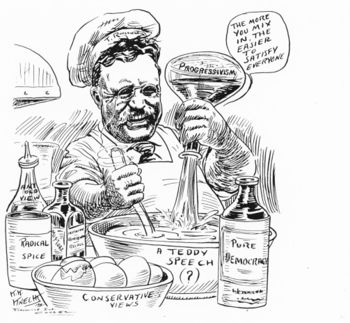 Roosevelt ran a vigorous campaign, but the campaign was short of money, as the business interests which had supported Roosevelt in 1904 either backed the other candidates or stayed neutral. Roosevelt was also handicapped because he had already served nearly two full terms as President, and thus was challenging the unwritten "no third term" rule.

This was nonetheless the best showing by any third party since the modern two-party system was established in 1864. Roosevelt was the only third-party candidate to outpoll a candidate of an established party. 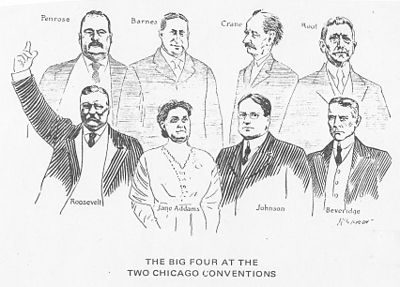 Many historians have concluded that the Republican split allowed Wilson to win the presidency. Others argue that even without the split, Wilson would have won (as he did in 1916).

In addition to Roosevelt's presidential campaign, hundreds of other candidates sought office as Progressives in 1912.

Twenty-one ran for governor. Over 200 ran for U.S. Representative (the exact number is not clear because there were many Republican-Progressive fusion candidacies, and some candidates ran with the labels of ad hoc groups such as "Bull Moose Republicans" or (in Pennsylvania) the "Washington Party".

On October 14, 1912, Theodore Roosevelt was shot in the chest in Milwaukee, Wisconsin, and still delivered his 90-minute presidential campaign speech as planned. The would-be assassin, John Flammang Schrank, claimed the ghost of William McKinley had appeared to him in a dream and ordered him to avenge his death by killing Roosevelt. Had it not been for the 50-page speech and steel eyeglass case he was carrying in his jacket, the bullet would have gone deeper into his chest and penetrated his lung. When asked if the shooting would affect his election campaign, he said to the reporter "I'm fit as a bull moose," which inspired the party's emblem.[13]

In California, the state Republican party was controlled by governor and Roosevelt ally Hiram Johnson, the Vice-Presidential nominee, so progressives there stayed with the Republican label (with one exception).

Most of the Progressive candidates were in New York, Ohio, Indiana, Illinois, and Massachusetts. Only a few were in the South.

The lesser Progressive candidates generally got between 10% and 30% of the vote. Nine Progressives were elected to the House; none won governorships.[14]

Some historians speculate that if the Progressive Party had run only the Roosevelt presidential ticket, it might have attracted many more Republicans willing to split their ballot. But the progressive movement was strongest at the state level, and, so the new party had fielded candidates for governor and state legislature. In Pittsburgh, Pennsylvania, the local Republican boss, at odds with state party leaders, joined Roosevelt's cause.

In spite of this, very few Progressives were elected to local offices; about 250. The Democrats gained many state legislature seats, which gave them 10 additional U.S. Senate seats; they also gained 63 U.S. House seats.

Despite the failure of 1912, the Progressive Party did not disappear at once. 138 candidates, including women,[15] ran for the U.S. House as Progressives in 1914, and 5 were elected. However, almost half the candidates failed to get more than 10% of the vote.[16]

Hiram Johnson was denied renomination for Governor as a Republican; he ran as a Progressive and was re-elected. Seven other Progressives ran for governor; none got more than 16%.[17]

Some state parties remained fairly strong. In Washington, Progressives won a third of the seats in the Washington State Legislature

Louisiana businessman John M. Parker ran for governor as a Progressive early in the year. (The Republican Party was deeply unpopular in Louisiana.) Parker got a respectable 37% of the vote. He was the only Progressive to run for governor that year.[18]

The Progressives wanted reunification, but with Roosevelt as nominee, which the Republicans adamantly opposed. Meanwhile, Charles Evans Hughes, a moderate progressive, became the front-runner at the Republican convention, though opposed by many conservatives. The Progressives suggested Hughes as a compromise candidate. Then Roosevelt sent a message proposing conservative Senator Henry Cabot Lodge. The shocked Progressives immediately nominated Roosevelt again, with Parker as the Vice Presidential nominee.

Roosevelt refused to accept the nomination and endorsed Hughes, who was immediately approved by the Republican convention.[19]

The national Progressive party promptly disintegrated. Nearly all Progressives reverted to the Republican Party, including Roosevelt, who stumped for Hughes, and Hiram Johnson, who was elected to the Senate as a Republican.

Some leaders, such as Harold Ickes of Chicago, supported Wilson.

Five Progressives were elected to the House in 1916, all with joint Republican backing except Whitmell Martin of Louisiana.[20]

All the remaining "Progressives" in Congress rejoined the Republican Party, except Martin, who became a Democrat. No candidates ran as Progressives for governor, Senator, or Representative.

From 1916 to 1932 the Taft wing controlled the Republican Party and refused to nominate any prominent 1912 Progressives to the Republican national ticket. Finally, Frank Knox was nominated for Vice President in 1936.

The relative domination of the Republican Party by conservatives left many former Progressives with no real affiliation till the 1930s, when most joined the New Deal Democratic Party coalition of President Franklin D. Roosevelt.

Office holders from the Progressive Party