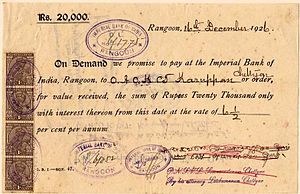 A 1926 Promissory Note from the Imperial Bank of India, Rangoon, Burma for 20,000 Rupees plus interest

A promissory note is a legal instrument (more particularly, a financial instrument), in which one party (the maker or issuer) promises in writing to pay a determinate sum of money to the other (the payee), either at a fixed or determinable future time or on demand of the payee, under specific terms. If the promissory note is unconditional and readily salable, it is called a negotiable instrument.[1]

Referred to as a note payable in accounting (as distinguished from accounts payable), or commonly as just a "note", it is internationally defined by the Convention providing a uniform law for bills of exchange and promissory notes, although regional variations exist. A banknote is frequently referred to as a promissory note: a promissory note made by a bank and payable to bearer on demand. Mortgage notes are another prominent example.

Promissory notes are a common financial instrument in many jurisdictions, employed principally for short time financing of companies. Often, the seller or provider of a service is not paid upfront by the buyer (usually, another company), but within a period of time, the length of which has been agreed upon by both the seller and the buyer. The reasons for this may vary; historically, many companies used to balance their books and execute payments and debts at the end of each week or tax month; any product bought before that time would be paid only then. Depending on the jurisdiction, this deferred payment period can be regulated by law; in countries like France, Italy or Spain, it usually ranges between 30 to 90 days after the purchase.[2]

Thus, promissory notes can work as a form of private money. In the past, particularly during the 19th century, their widespread and unregulated use was a source of great risk for banks and private financiers, who would often face the insolvency of both debtors, or simply be scammed by both.

The terms of a note usually include the principal amount, the interest rate if any, the parties, the date, the terms of repayment (which could include interest) and the maturity date. Sometimes, provisions are included concerning the payee's rights in the event of a default, which may include foreclosure of the maker's assets. Demand promissory notes are notes that do not carry a specific maturity date, but are due on demand of the lender. Usually the lender will only give the borrower a few days' notice before the payment is due. For loans between individuals, writing and signing a promissory note are often instrumental for tax and record keeping. A promissory note alone is typically unsecured,[5] but these may be used in combination with security agreements such as mortgage, in which case they are called mortgage notes.

Definition and usage of promissory notes are internationally established by the Convention providing a uniform law for bills of exchange and promissory notes, signed in Geneva in 1930.[6] Article 75 of the treaty stated that a promissory note shall contain:

In the United States, a promissory note that meets certain conditions is a negotiable instrument regulated by article 3 of the Uniform Commercial Code. Negotiable promissory notes called mortgage notes are used extensively in combination with mortgages in the financing of real estate transactions. One prominent example is the Fannie Mae model standard form contract Multistate Fixed-Rate Note 3200, which is publicly available.[7] Promissory notes, or commercial papers, are also issued to provide capital to businesses. However, Promissory Notes act as a source of Finance to the company's creditors.

The various State law enactments of the Uniform Commercial Code define what is and what is not a promissory note, in section 3-104(d):

Thus, a writing containing such a disclaimer removes such a writing from the definition of negotiable instrument, instead simply memorializing a contract. 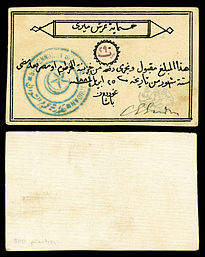 File:SUD-S106a-Siege of Khartoum-500 Piastres (1884).jpg
500 piastre promissory note issued and hand-signed by Gen. Gordon during the Siege of Khartoum (1884) payable six months from the date of issue.[9]

Historically, promissory notes have acted as a form of privately issued currency. Flying cash or feiqian was a promissory note used during the Tang dynasty (618 – 907). Flying cash was regularly used by Chinese tea merchants, and could be exchanged for hard currency at provincial capitals.[10] The Chinese concept of promissory notes was introduced by Marco Polo to Europe.[11] According to tradition, in 1325 a promissory note was signed in Milan. There is evidence of promissory notes being issued in 1384 between Genova and Barcelona, although the letters themselves are lost. The same happens for the ones issued in Valencia in 1371 by Bernat de Codinachs for Manuel d'Entença, a merchant from Huesca (then part of the Crown of Aragon), amounting a total of 100 florins.[12] In all these cases, the promissory notes were used as a rudimentary system of paper money, for the amounts issued could not be easily transported in metal coins between the cities involved. Ginaldo Giovanni Battista Strozzi issued an early form of promissory note in Medina del Campo (Spain), against the city of Besançon in 1553.[13] However, there exists notice of promissory notes being in used in Mediterranean commerce well before that date.

Promissory notes differ from IOUs in that they contain a specific promise to pay along with the steps and timeline for repayment as well as consequences if repayment fails.[14] IOUs only acknowledge that a debt exists.[15][16] In common speech, other terms, such as "loan", "loan agreement", and "loan contract" may be used interchangeably with "promissory note" but these terms do not have the same legal meaning.[citation needed]

In the United States, the Non-Negotiable Long Form Promissory Note is not required.[19]