From Infogalactic: the planetary knowledge core
(Redirected from Proselytize)
Jump to: navigation, search 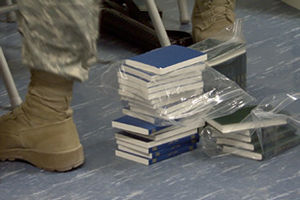 Still from a video made during an official religious gathering in Bagram where chaplains discussed with GIs what to do with a shipment of bibles one GI had been sent by his congregation back home. A GI filmed the meeting, and the video was eventually broadcast by Al Jazeera. American spokesmen claimed the video was misleading, claimed that chaplains had, in the end, confiscated the bibles, which were, eventually, burned.

Proselytism /ˈprɒsəlᵻˌtɪzəm/ is the act of attempting to convert people to another religion or opinion.[1][2] The word proselytize is derived from the Greek language prefix προσ- (pros-, toward) and the verb ἔρχομαι (érchomai, to come) in the form of προσήλυτος (prosélytos, a new comer).[3] Historically in the Koine Greek Septuagint and New Testament, the word proselyte denoted a gentile who was considering conversion to Judaism. Though the word proselytism originally referred to Early Christianity (and earlier Gentiles such as God-fearers), it now refers to the attempt of any religion or religious individuals to convert people to their beliefs, or any attempt to convert people to a different point of view, religious or not. Proselytism is illegal in some countries.[4]

Every Bahá'í has the obligation of teaching their religion, as it is seen as the path toward bringing peace and justice to the world.[7] Some Bahá'ís move to other countries or cities where there are a small number of Bahá'ís to help spread the religion, and this is called pioneering.[5] Some other Bahá'ís move from place to place in a process called travel teaching.[5] When moving or travelling to other countries Bahá'ís are encouraged to integrate into their new society and apply Bahá'ís principles in living and working with their neighbours. In total, however, only a small minority of Bahá'ís are directly teaching their religion to others.[6] Despite this, religion has grown "at least twice as fast as the population of almost every UN region" over the last century.[8]

Bahá'u'lláh, the founder of the Bahá'í Faith, wrote that those who would be teaching his religion should emphasize the importance of ethics and wisdom, and he counselled Bahá'ís to be unrestrained and put their trust in God. At the same time he stated that Bahá'ís should exercise moderation, tact and wisdom and not be too aggressive in their teaching.[7] In sharing their faith with others, Bahá'ís are cautioned to make sure the person they are proposing to teach is open to hearing what they have to say. In most countries becoming a Bahá'í is a simple matter of filling out a card stating a declaration of belief. This includes acknowledgement of Bahá'u'llah as the messenger of God for this age, awareness and acceptance of his teachings, and intention to be obedient to the institutions and laws he established. It does not involve negating one's previous beliefs, due to the Bahá'í belief in progressive revelation.

Statue of St. Patrick of the Celtic Church, who was famous for proselytizing
Main articles: Mission (Christianity), Evangelism and Christianization

Many Christians consider it their obligation to follow what is often termed the Great Commission of Jesus, recorded in the final verses of the Gospel of Matthew: "Go ye therefore, and teach all nations, baptizing them in the name of the Father, and of the Son, and of the Holy Ghost: Teaching them to observe all things whatsoever I have commanded you: and, lo, I am with you always, even unto the end of the world. Amen."[9] The Acts of the Apostles and other sources contain several accounts of early Christians following this directive by engaging in individual conversations and mass sermons to spread the Good News. Evangelical Christians often use the term "witnessing" to mean discussing one's faith with another person with the intent of proselytism.

Most self-described Christian groups have organizations devoted to missionary work which in whole or in part includes proselytism of the non-religious and people of other faiths (including sometimes other variants of Christianity).

Some Christians define "proselytism" more narrowly as the attempt to convert people from one Christian tradition to another; those who use the term in this way generally view the practice as illegitimate and in contrast to evangelism, which is converting non-Christians to Christianity. An Eastern Orthodox writer, Stephen Methodius Hayes has written: "If people talk about the need for evangelism, they meet with the response, 'the Orthodox church does not proselytize' as if evangelizing and proselytism were the same thing." However the boundary varies from group to group. For instance the Moscow Patriarchate has repeatedly strongly condemned what it describes as Catholic proselytism of Orthodox Christians within Russia and has therefore opposed a Catholic construction project in an area of Russia where the Catholic community is small. The Catholic Church claims that it is supporting the existing Catholic community within Russia and is not proselytizing.[10][11][12] In 1993 the Balamand declaration on proselytism was released between the Roman Catholic Church and Orthodox Churches.

Groups noted for proselytism include: 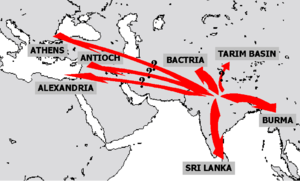 Buddhist proselytism at the time of king Ashoka (260-218 BC), according to the Edicts of Ashoka

Proselytisation is not alien to Indian religions such as Hinduism, Buddhism, Jainism and Sikhism although they are largely pluralistic.

Buddhism has historically been an actively proselytising faith, which spread mainly through monks and missionaries all over India, South Asia and Indo China.The Emperor Ashoka sent royal missionaries to various Kingdoms of South Asia with the message of the Dhamma of the Buddha even sending his son and daughter as missionaries to Sri Lanka. Even today Buddhism is a growing religion in the West. The role of the bhantes and bhikkus monks for the spread of the message of Buddha and of the faith of Buddhism is crucial. Buddhism admits converts without any distinction of race, previous religion or gender and any adherent of Buddhism can at least theoretically aspire to reach the highest ecclesiastical offices or even attain the status of Buddha or Bodhisattva. Some adherents of Nichiren Buddhism actively proselytise referred to as Shakubuku.

Hinduism, also known as Sanatan Dharma, is one of the world's oldest continuously practiced religions. Classical Hinduism has no binding conversion/re-conversion rituals prescribed and one is free to choose the Hindu religion if he/she wants to, or follow any philosophy or belief one fancies and worship any other god in a manner he/she deems fit.

There is a trend in certain areas of India to stop any apostasy from Hindu faith through social ostracism by fundamentalist Hindu political groups, and the reconverts are usually accepted back. Converts from Hinduism to the other religions are condemned because such conversions to Christianity allegedly include material inducements and opportunities offered by foreign missionaries sponsored by Western Christian nations.[citation needed] Similarly any converts from Hinduism to Islam are claimed by Hindu fundamentalist groups to have converted basically to avail polygamy which, by Muslim Personal Law, is legal in India. However, conversion just for the purpose of polygamy is not permissible by Indian law.[15] 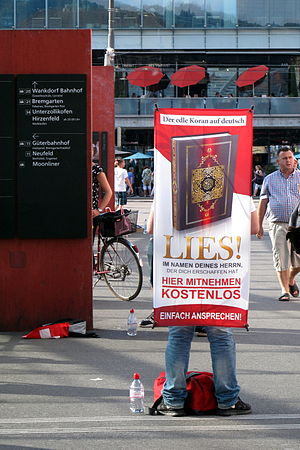 Mahavira (599-527 BC), the 24th Tirthankara of Jainism, developed an early philosophy regarding relativism and subjectivism known as Anekantavada. As a result of this acceptance of alternate religious practices, the phenomenon of proselytisation is largely absent in these religions but not unknown.Converts are welcome to the Jain faith.

Sikhism is not a proselytizing religion and proselytism is largely discouraged "through force or inducement" out of the belief that each person has a fundamental right to practice their religion freely.[18] 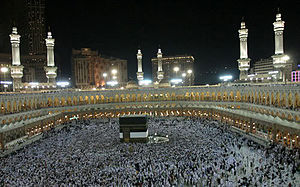 In Islam, (see dawah and Islamic missionary activity) inviting people to the religion is a meritorious activity. The Qur'an states

"Let there be no compulsion in the religion: Surely the Right Path is clearly distinct from the crooked path." (Al-Baqarah, 2:256) which is taken by Muslim scholars that force is not to be used to convert someone to Islam. Muslims consider inviting others to Islam is the mission originally carried out by the Prophets of Allah and is now a collective duty of Muslims. In Qur’an Allah states: "Invite to the Way of your Lord with wisdom and beautiful preaching; and argue with them (non-believers) in ways that are best and most gracious; (leave judging them) for your Rabb knows best, who have strayed from His Path, and who receive guidance." (An-Nahl: 125)

Unlike in the Hellenistic era (Second Temple Judaism), in the modern era most branches of Judaism do not actively proselytize non-Jews. Instead non-Jews are encouraged to follow Noahide Law, which is said to assure a place in the World to Come. Some groups, however, will encourage nonobservant Jews to be observant, such as Aish HaTorah or Chabad. Many branches of Judaism are open to the conversion of the non-Jewish spouses of already existing mixed marriages to convert to Judaism.[19] Orthodox Judaism in theory, neither encourages nor discourages conversion, however their standards for conversion can be very challenging but persistent and sincere requests for conversion are conducted.[20]

Sects of some religions, such as the Druze and Zoroastrians, do not accept converts at all.[21][22]

Views on the propriety of different types of proselytism differ radically. Some feel that freedom of speech should have no limits and that virtually anyone, anywhere should have the right to talk about anything they see fit. Others see all sorts of proselytism as a nuisance and an intrusion and would like to see them restricted (either completely or to a limited arena). Thus, Prof. Natan Lerner of Tel Aviv University observes that the issue is one of a clash of rights—the perceived right of a person to express his or her views versus the perceived right of a person not to be exposed to views that he or she does not wish to hear.

Some don't mind preaching but are concerned if the speech is accompanied by material benefits (e.g., a soup kitchen that provides food, but only under the condition that the recipients listen to an evangelical discourse) or new converts are given material benefits not available to those who don't convert. Others are concerned if the preaching is aimed at children without the knowledge or consent of the parents.

From a legal standpoint (international, as well the European Union, or nationally India, Canada and United States), there do appear to be certain criteria in distinguishing licit from illicit proselytism. The International Covenant on Civil and Political Rights Article 18 states,

The first amendments to the constitutions of United States and India, the European Union Charter of Human Rights and the Canadian Charter of Rights and Freedoms provide that all people have:

By the same token, these very rights exercise a limiting influence on the freedoms of others. For instance, the right to have one's religious (or non-religious) beliefs presumably includes the right not to be coerced by the government into changing these beliefs by threats, discrimination, or similar inducements.[citation needed]

Proselytism is considered inappropriate, disrespectful, and offensive by some individuals. As such, it is not protected in certain environments open to the public or are owned privately: government buildings, public education (grade schools and college campuses), the workplace and private properties like ones' home or front yard. These environments, due to either their openness or privacy, are often where proselytism takes place and can come from a variety of sources depending on the environment (e.g., students or teachers in schools and colleges, coworkers or employers, office workers, family members, or neighbors in a community).[citation needed]

Religious groups also draw lines between what they are willing to do or not do to convert people. For instance the Catholic Church in Ad gentes states that "The Church strictly forbids forcing anyone to embrace the Faith, or alluring or enticing people by worrisome wiles." The World Council of Churches in The Challenge of Proselytism and the Calling to Common Witness[24] states the following:

19. Proselytism as described in this document stands in opposition to all ecumenical effort. It includes certain activities which often aim at having people change their church affiliation and which we believe must be avoided, such as the following: