Protestant Church in Hesse and Nassau

The Protestant Church in Hesse and Nassau (German: Evangelische Kirche in Hessen und Nassau, EKHN) is a protestant, liberal church body in the German states of Hesse and Rhineland-Palatinate. There is no bishop and therefore no cathedral. One of its most prominent churches is Katharinenkirche in Frankfurt am Main.

The EKHN is a full member of the Evangelical Church in Germany (EKD), and is based on the teachings brought forward by Martin Luther during the Reformation. The Church President is Volker Jung (de) (since 2009). It is a united church, combining both Calvinist and Lutheran traditions. Member of the Reformed Alliance in Germany.[2]

The Protestant Church in Hesse and Nassau is one of 22 churches in the EKD, has approximately 1,810,000 members in 1,184 parishes (December, 2005). The territory of the EKHN includes the territories of the former People's State of Hesse and the Prussian Wiesbaden Region, which now form the southern and western part of the German state of Hesse and portions of the German state of Rhineland-Palatinate (Rhenish Hesse). It's the most important Protestant denomination in this area. The church is a member of the Community of Protestant Churches in Europe. 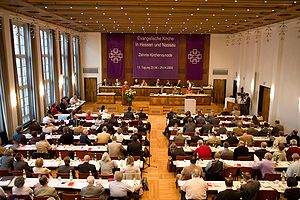 Institutions of the EKHN are the Church Synod, the church leadership and the church president, who is elected by the General Synod for eight years.

The church ran an de (Evangelische Akademie) (Protestant academy) in de (Arnoldshain), which was moved to Frankfurt in 2013.[3]