Example of the Jiahu symbols, writing-like markings, found on tortoise shells were dated around 6000 BC.[1]

The early writing systems that emerged in Eurasia in the early 3rd millennium BC were not a sudden invention. Rather, they were a development based on earlier traditions of symbol systems that cannot be classified as writing proper, but have many characteristics strikingly similar to writing. These systems may be described as proto-writing. They used ideographic and/or early mnemonic symbols to convey information yet were probably devoid of direct linguistic content. These systems emerged in the early Neolithic period, as early as the 7th millennium BC.

In 2003, tortoise shells were found in 24 Neolithic graves excavated at Jiahu, Henan province, northern China, with radiocarbon dates from the 7th millennium BC. According to some archaeologists, the symbols carved on the shells had similarities to the late 2nd millennium BC oracle bone script.[2] Others have dismissed this claim as insufficiently substantiated, claiming that simple geometric designs such as those found on the Jiahu shells cannot be linked to early writing.[3] 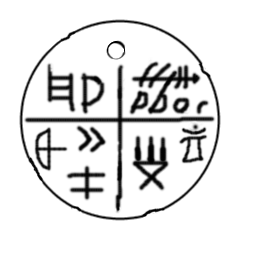 Clay amulet, one of the Tărtăria tablets, dated to ca. 4500 BC

The Vinča signs or the Vinča symbols (6th to 5th millennia BC, present-day Serbia) are an evolution of simple symbols beginning in the 7th millennium BC, gradually increasing in complexity throughout the 6th millennium and culminating in the Tărtăria tablets of ca. 5300 BC;[4] it has been argued that the alignment of the symbols evokes the impression of a "text".

The Dispilio Tablet of the late 6th millennium is similar. The hieroglyphic scripts of the Ancient Near East (Egyptian, Sumerian proto-Cuneiform and Cretan) seamlessly emerge from such symbol systems, so that it is difficult to say at what point precisely writing emerges from proto-writing. Adding to this difficulty is the fact that very little is known about the symbols' meanings.

The transition from proto-writing to the earliest fully developed writing systems took place in the late 4th to early 3rd millennium BC in the Fertile Crescent. The Kish tablet, dated to 3500 BC, reflects the stage of "proto-cuneiform", when what would become the cuneiform script of Sumer was still in the proto-writing stage. By the end of the 4th millennium BC, this symbol system had evolved into a method of keeping accounts, using a round-shaped stylus impressed into soft clay at different angles for recording numbers. This was gradually augmented with pictographic writing using a sharp stylus to indicate what was being counted. The transitional stage to a writing system proper takes place in the Jemdet Nasr period (31st to 30th centuries BC). A similar development took place in the genesis of the Egyptian hieroglyphs. Various scholars believe that Egyptian hieroglyphs "came into existence a little after Sumerian script, and ... probably [were] ... invented under the influence of the latter ...",[5] although it is pointed out and held that "the evidence for such direct influence remains flimsy" and that "a very credible argument can also be made for the independent development of writing in Egypt ..."[6] (See further Egyptian hieroglyphs).

During the Bronze Age, the cultures of the Ancient Near East had fully developed writing systems, while the marginal territories affected by the Bronze Age, viz. Europe, India and China, remained in the stage of proto-writing.

The Chinese script emerges from proto-writing in the Chinese Bronze Age, during about the 14th to 11th centuries BC (Oracle bone script), while symbol systems native to Europe and India are extinct and replaced by descendants of the Semitic abjad during the Iron Age.

The so-called Indus script is a symbol system used during the 3rd millennium BC in the Indus Valley Civilization.

With the exception of the Aegean (Linear A, Cretan hieroglyphs), the early writing systems of the Near East did not reach Bronze Age Europe. The earliest writing systems of Europe arise in the Iron Age, derived from the Phoenician alphabet.

However, there are number of interpretations regarding symbols found on artefacts of the European Bronze Age which amount to interpreting them as an indigenous tradition of proto-writing. Of special interest in this context are the Central European Bronze Ages cultures derived from the Beaker culture in the second half of the 2nd millennium BC. Interpretations of the markings of the bronze sickles associated with the Urnfield culture, especially the large number of so-called "knob-sickles" discovered in the Frankleben hoard, are discussed by Sommerfeld (1994).[7] Sommerfeld favours an interpretation of these symbols as numerals associated with a lunar calendar.[8]

Even after the Bronze Age, several cultures have gone through a period of using systems of proto-writing as an intermediate stage before the adoption of writing proper. The "Slavic runes" (7th/8th century) mentioned by a few medieval authors may have been such a system. The Quipu of the Incas (15th century), sometimes called "talking knots", may have been of a similar nature. Another example is the system of pictographs invented by Uyaquk before the development of the Yugtun syllabary (ca. 1900).

Nsibidi is a system of symbols indigenous to what is now southeastern Nigeria. While there remains no commonly accepted exact date of origin, most researchers agree that use of the symbols date back well before 500 CE.[9] There are thousands of Nsibidi symbols which were used on anything from calabashes to tattoos and to wall designs. Nsibidi is used for the Ekoid and Igboid languages, and the Aro people are known to write Nsibidi messages on the bodies of their messengers.[10]