From Infogalactic: the planetary knowledge core
Jump to: navigation, search
For other uses, see Prototype (disambiguation). 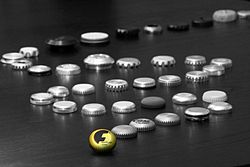 An array of prototypes leading to the final design.

A prototype is an early sample, model, or release of a product built to test a concept or process or to act as a thing to be replicated or learned from.[1] It is a term used in a variety of contexts, including semantics, design, electronics, and software programming. A prototype is designed to test and try a new design to enhance precision by system analysts and users. Prototyping serves to provide specifications for a real, working system rather than a theoretical one.[2] In some workflow models, creating a prototype (a process sometimes called materialization) is the step between the formalization and the evaluation of an idea.[3]

Differences between a prototype and a production design

In general, prototypes will differ from the final production variant in three fundamental ways:

Characteristics and limitations of prototypes 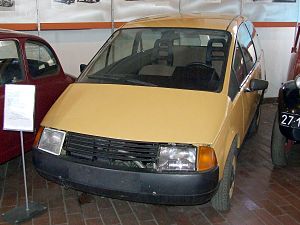 A prototype of the Polish economy hatchback car Beskid 106 designed in the 1980s.

Engineers and prototyping specialists seek to understand the limitations of prototypes to exactly simulate the characteristics of their intended design.

In general, it can be expected that individual prototype costs will be substantially greater than the final production costs due to inefficiencies in materials and processes. Prototypes are also used to revise the design for the purposes of reducing costs through optimization and refinement.

It is possible to use prototype testing to reduce the risk that a design may not perform as intended, however prototypes generally cannot eliminate all risk. There are pragmatic and practical limitations to the ability of a prototype to match the intended final performance of the product and some allowances and engineering judgement are often required before moving forward with a production design.

Building the full design is often expensive and can be time-consuming, especially when repeated several times—building the full design, figuring out what the problems are and how to solve them, then building another full design. As an alternative, rapid prototyping or rapid application development techniques are used for the initial prototypes, which implement part, but not all, of the complete design. This allows designers and manufacturers to rapidly and inexpensively test the parts of the design that are most likely to have problems, solve those problems, and then build the full design.

In technology research, a technology demonstrator is a prototype serving as proof-of-concept and demonstration model for a new technology or future product, proving its viability and illustrating conceivable applications.

In large development projects, a testbed is a platform and prototype development environment for rigorous experimentation and testing of new technologies, components, scientific theories and computational tools.

With recent advances in computer modeling it is becoming practical to eliminate the creation of a physical prototype (except possibly at greatly reduced scales for promotional purposes), instead modeling all aspects of the final product as a computer model. An example of such a development can be seen in Boeing 787 Dreamliner, in which the first full sized physical realization is made on the series production line. Computer modeling is now being extensively used in automotive design, both for form (in the styling and aerodynamics of the vehicle) and in function — especially for improving vehicle crashworthiness and in weight reduction to improve mileage.

The most common use of the word prototype is a functional, although experimental, version of a non-military machine (e.g., automobiles, domestic appliances, consumer electronics) whose designers would like to have built by mass production means, as opposed to a mockup, which is an inert representation of a machine's appearance, often made of some non-durable substance.

However, more and more often the first functional prototype is built on a "prototype PCB" almost identical to the production PCB, as PCB manufacturing prices fall and as many components are not available in DIP packages, but only available in SMT packages optimized for placing on a PCB.

Builders of military machines and aviation prefer the terms "experimental" and "service test". 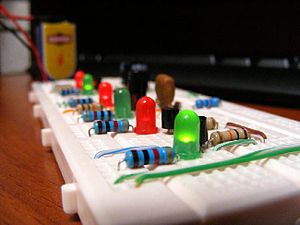 A simple electronic circuit prototype on a breadboard.

In electronics, prototyping means building an actual circuit to a theoretical design to verify that it works, and to provide a physical platform for debugging it if it does not. The prototype is often constructed using techniques such as wire wrapping or using veroboard or breadboard, with the result being a circuit that is electrically identical to the design but not physically identical to the final product.

Open-source tools like Fritzing exist to document electronic prototypes (especially the breadboard-based ones) and move toward physical production. Prototyping platforms such as Arduino also simplify the task of programming and interacting with a microcontroller. The developer can choose to deploy their invention as-is using the prototyping platform, or replace it with only the microcontroller chip and the circuitry that is relevant to their product.

A technician can quickly build a prototype (and make additions and modifications) using these techniques, but for volume production it is much faster and usually cheaper to mass-produce custom printed circuit boards than to produce these other kinds of prototype boards. The proliferation of quick-turn PCB fabrication and assembly companies has enabled the concepts of rapid prototyping to be applied to electronic circuit design. It is now possible, even with the smallest passive components and largest fine-pitch packages, to have boards fabricated, assembled, and even tested in a matter of days.

In many programming languages, a function prototype is the declaration of a subroutine or function (and should not be confused with software prototyping). This term is rather C/C++-specific; other terms for this notion are signature, type and interface. In prototype-based programming (a form of object-oriented programming), new objects are produced by cloning existing objects, which are called prototypes.[8]

The term may also refer to the Prototype Javascript Framework.

Additionally, the term may refer to the prototype design pattern.

Prototype software is often referred to as alpha grade, meaning it is the first version to run. Often only a few functions are implemented, the primary focus of the alpha is to have a functional base code on to which features may be added. Once alpha grade software has most of the required features integrated into it, it becomes beta software for testing of the entire software and to adjust the program to respond correctly during situations unforeseen during development.[9]

Often the end users may not be able to provide a complete set of application objectives, detailed input, processing, or output requirements in the initial stage. After the user evaluation, another prototype will be built based on feedback from users, and again the cycle returns to customer evaluation. The cycle starts by listening to the user, followed by building or revising a mock-up, and letting the user test the mock-up, then back. There is now a new generation of tools called Application Simulation Software which help quickly simulate application before their development.

Extreme programming uses iterative design to gradually add one feature at a time to the initial prototype.

Continuous learning approaches within organizations or businesses may also use the concept of business or process prototypes through software models.

A data prototype is a form of functional or working prototype. The justification for its creation is usually a data migration, data integration or application implementation project and the raw materials used as input are an instance of all the relevant data which exists at the start of the project.
The objectives of data prototyping are to produce:

To achieve this, a data architect uses a graphical interface to interactively develop and execute transformation and cleansing rules using raw data. The resultant data is then evaluated and the rules refined. Beyond the obvious visual checking of the data on-screen by the data architect, the usual evaluation and validation approaches are to use Data profiling software and then to insert the resultant data into a test version of the target application and trial its use. 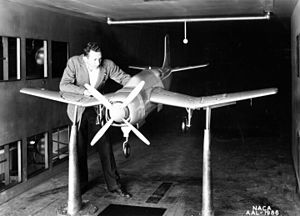 A scale model of an airplane in a wind tunnel for testing.

In the field of scale modeling (which includes model railroading, vehicle modeling, airplane modeling, military modeling, etc.), a prototype is the real-world basis or source for a scale model—such as the real EMD GP38-2 locomotive—which is the prototype of Athearn's (among other manufacturers) locomotive model. Technically, any non-living object can serve as a prototype for a model, including structures, equipment, and appliances, and so on, but generally prototypes have come to mean full-size real-world vehicles including automobiles (the prototype 1957 Chevy has spawned many models), military equipment (such as M4 Shermans, a favorite among US Military modelers), railroad equipment, motor trucks, motorcycles, and space-ships (real-world such as Apollo/Saturn Vs, or the ISS). As of 2014, basic rapid prototype machines (such as 3D printers) cost about $2,000, but larger and more precise machines can cost as much as $500,000.[10]

In the science and practice of metrology, a prototype is a human-made object that is used as the standard of measurement of some physical quantity to base all measurement of that physical quantity against. Sometimes this standard object is called an artifact. In the International System of Units (SI), the only prototype remaining in current use is the International Prototype Kilogram, a solid platinum-iridium cylinder kept at the Bureau International des Poids et Mesures (International Bureau of Weights and Measures) in Sèvres France (a suburb of Paris) that by definition is the mass of exactly one kilogram. Copies of this prototype are fashioned and issued to many nations to represent the national standard of the kilogram and are periodically compared to the Paris prototype.

Until 1960, the meter was defined by a platinum-iridium prototype bar with two scratch marks on it (that were, by definition, spaced apart by one meter), the International Prototype Metre, and in 1983 the meter was redefined to be the distance in free space covered by light in 1/299,792,458 of a second (thus defining the speed of light to be 299,792,458 meters per second).

It is widely believed that the kilogram prototype standard will be replaced. There are two likely replacements. One is a definition of the kilogram that will define another physical constant (likely either Planck's constant or the elementary charge) to a defined numerical value, thus obviating the need for the prototype and removing the possibility of the prototype (and thus the standard and definition of the kilogram) changing very slightly over the years because of loss or gain of atoms. The other definition is using a system that finds the amount of force needed to counteract the pull of earth's gravity on a one kilogram artifact. [11]

In many sciences, from pathology to taxonomy, prototype refers to a disease, species, etc. which sets a good example for the whole category. In Biology, prototype is the ancestral or primitive form of a species or other group; an archetype.[12] For example, the Senegal bichir is regarded as the prototypes of its genus, Polypterus.