Providence Park (formerly Jeld-Wen Field; PGE Park; Civic Stadium; originally Multnomah Stadium; and from 1893 until the stadium was built, Multnomah Field)[1] is an outdoor sports venue located in the Goose Hollow neighborhood of Portland, Oregon, United States. The MLS Portland Timbers soccer team use the facility as their home pitch, as do the NWSL's Portland Thorns FC and the USL PDL Timbers U23s. The NCAA Division I FCS Portland State Vikings football team uses the park during the Big Sky season. The stadium has been host to several major sporting events including Soccer Bowl '77, the 1999 and 2003 FIFA Women's World Cups, the 2009 Triple-A All-Star Game, the 2013 CONCACAF Gold Cup, and the 2014 MLS All-Star Game.

Originally, the park was owned by the Multnomah Athletic Club and used by their amateur sports teams. In the 1950s, the PCL Portland Beavers baseball team moved out of Vaughn Street Park into what was then known as "Multnomah Stadium". In 1966, the city purchased the stadium and renamed it "Civic Stadium". It was renovated in 2001 to accommodate the Beavers, who had not played at the park since the early 1990s. The naming rights of the stadium were purchased by Portland General Electric and it was renamed "PGE Park". In 2010, the park underwent renovations again, this time so it could accommodate the Portland Timbers MLS franchise and a year later the rights to the stadiums name were sold, this time to Jeld-Wen. In 2014, the name was changed again to "Providence Park" after Providence Health & Services bought the naming rights.[9] The stadium sits on a rectangular block bounded by Southwest Morrison Street, Southwest 18th Avenue, the Multnomah Athletic Club building and Southwest Salmon Street, and Southwest 20th Avenue.[10][11]

Providence Park is an outdoor stadium which houses the MLS Portland Timbers, NWSL Portland Thorns, and Portland State University Vikings football. The stadium underwent a $31 million renovation in late 2010 and early 2011.[12] The stadium is owned by the City of Portland, and is managed by Peregrine Sports, LLC, the entity that owns the Timbers and Thorns.

The Multnomah Athletic Club, an athletic club in downtown Portland, stands next door; the windows of the north side of the club's building overlook the field.

The Interstate 405 freeway in Portland is also known locally as the Stadium Freeway and travels near the stadium. In addition, the Providence Park MAX Light Rail station is across the street. The property slopes significantly downhill from the south end to the north end, with the result that the playing surface sits well below street level.

The stadium is currently home to the Portland Timbers of MLS, Portland Thorns FC of NWSL, and the Portland State University Vikings football team.

The Portland Beavers minor league baseball team of the Pacific Coast League (PCL) moved into the stadium in 1956 after playing several seasons at Vaughn Street Park, which has since been demolished.

Before the city purchased the stadium, it was owned by the Multnomah Athletic Club

From 1973 to 1977 the independent Portland Mavericks of the Northwest League played their home games at the stadium. Actor Kurt Russell was an infielder for the Mavericks.[13] The Beavers returned to Portland in 1978 until 1993 when they were moved out of the city again. The Class A Portland Rockies were established in 1995 and played at the park until 2000 when they were moved and renamed the Tri-City Dust Devils. In 2001, the Albuquerque Dukes were moved to Portland and renamed the "Beavers" marking the third time the franchise would occupy the park for their home games.

After it was announced that Major League Soccer was moving a franchise to Providence Park (then known as PGE Park) the Beavers baseball team had to start looking for a new stadium. However, the plan never came to fruition and team owner Merritt Paulson put the Beavers up for sale. The club's major-league parent, the San Diego Padres, purchased the team, which moved to Tucson, Arizona as the Tucson Padres. The team played its final game at the stadium on September 6, 2010.[14][15]

Soccer has been hosted at Providence Park since the original Portland Timbers were founded in the original North American Soccer League in 1975. Various iterations of the team have called the stadium home, including the 1980s version in the Western Soccer Alliance and the 2000s version in the USL First Division before the MLS club was formed. 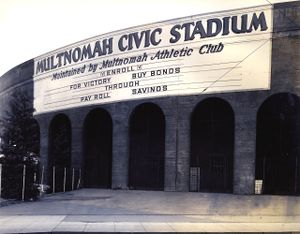 Providence Park (then known as Multnomah Civic Stadium) photographed in 1941

Since 1893, the site had been home to Multnomah Field, which consisted of sports fields with various grandstands.[16] The stadium was built in 1926 for $502,000, by what is now known as Multnomah Athletic Club, who named it Multnomah Civic Stadium.[17]

In the 1950s, the Portland Beavers moved to the stadium after their original field, Vaughn Street Park, was condemned. In 1966, the Multnomah Athletic Club sold the stadium for $2.1 million to the city of Portland, which renamed it Civic Stadium.[16][17][18]

A $38.5 million renovation took place in 2001, upgrading the seating and concourse area, and adding new luxury suites and club seats. The renovation also improved the structural soundness of the facility, and introduced a new sound system. The renovation also includes some retro-features, such as a manually operated baseball scoreboard. At that point, PGE bought the naming rights and it became PGE Park.[18] 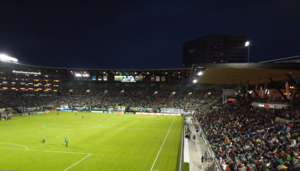 Panoramic view of the renovated eastern stands and northwest luxury boxes, during a Timbers game 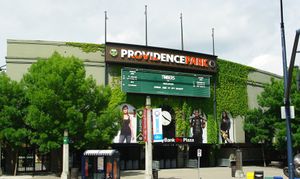 In July 2009, after attempts to both find a new home for an MLS franchise and identify a site for a new home for the Beavers, the Portland City Council approved a $31 million renovation to make PGE Park ready for the 2011 Major League Soccer season, by reconfiguring the stadium primarily for soccer and football.[19][20] The decision led to the departure of the Portland Beavers.

The renovation was performed by Turner Construction who served as the General Contractor and also performed the 2001 renovation, and Ellerbe Becket as the primary architect. A presentation to the Portland Design Commission indicated that 5,000 seats would be added, bringing capacity to about 22,000, but with only about 18,000 available for use on a regular basis.[21]

The renovation met Major League Soccer standards, introduced a new playing surface, which shifted west and north, and added space on the east and south sides, with new seating areas and new amenities. The Lighthouse Impact 16 main video screen was designed by Anthony James Partners and features over 74 square meters of LED video. A Lighthouse B10 pitchside display runs the length of the east side plus portions of the north and south ends and is over 152 meters long.[22] As the project was nearing completion, it was revealed to be $5 million over budget making the total cost of the renovation $36 million.[23] The agreement between the city and Timbers owner Merritt Paulson meant that Paulson was responsible for any cost overruns larger than $1 million.

The newly renovated stadium made its début on April 14, 2011 when Major League Soccer's Portland Timbers defeated the Chicago Fire, 4–2.[3] The announced attendance at Timbers games in 2011 was 18,627, a sell-out. 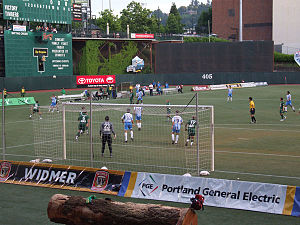 Soccer game in the USL years, viewing the old configuration of the eastern wall

On August 28, 1977, the stadium was site of the North American Soccer League Soccer Bowl '77 between the New York Cosmos and the Seattle Sounders, the last official game of the legendary Pelé. The Cosmos won the championship.

On September 7, 1997 the stadium hosted a World Cup soccer qualifying match between the United States men's national team and Costa Rica. A raucous capacity crowd of 27,396 saw the U.S. squad win, 1–0, on a goal by Tab Ramos in the 79th minute.

On July 1, 2009, the venue hosted the third-round match of the Lamar Hunt U.S. Open Cup between the Portland Timbers and their rivals the Seattle Sounders FC. 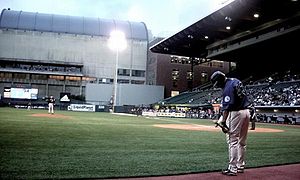 Facing south towards the Multnomah Athletic Club, during a baseball game in 2008

During the 1970s, the Jantzen swim wear company had a 3D model of the Jantzen girl hovering overby cable over the left field wall in its baseball configuration. The Jantzen girl was in play because it was below the top of the wall and it was hit a couple of times over the years.[27][28]

On May 27, 1991, the stadium received national attention when Vancouver Canadians outfielder Rodney McCray, while attempting to catch a fly ball, crashed through a wooden advertisement behind the warning track in right-center field; a real-life version of an incident in the fictional book and film, The Natural. While McCray failed to make the out, he only suffered scrapes and bruises and remained in the game. Highlight reels of that play ran for weeks on cable channels such as CNN and ESPN. On August 12, 2006, the Beavers commemorated the event with a Rodney McCray Bobblehead Night, passing out bobbleheads of McCray to fans and renaming right-center field "McCray Alley".[29]

On July 15, 2009, the stadium hosted the Triple-A All-Star Game, with the International League stars defeating the Pacific Coast league, 6–5. 16,657 fans attended the game, the largest crowd for a Triple-A All-Star game since 1991, and the third largest ever.

Other sports and entertainment

On September 2, 1957, Elvis Presley performed one of the first outdoor stadium rock concerts in music history (Elvis held the first ever in Vancouver, BC, Canada just a few days earlier at Empire Stadium) here on his four-day tour of the Pacific Northwest. The concert created mass hysteria, and an estimated 14,000 people attended the concert.[30][31]

On October 27, 2007, the stadium hosted the highest-scoring game in modern NCAA football history, when the Weber State University Wildcats defeated the PSU Vikings, 73–68, a combined point total of 141 points. This point total eclipsed the previous NCAA record of 136 points, set in a 1968 Division III game, and the previous Division I record of 133 points, set in 2004.[32] While this record lasted only two weeks, and has been surpassed three times in all, it remains the highest-scoring game involving NCAA Division I teams.

In a November 8, 2013 interview with the Portland Business Journal,[30][31] Portland Timbers owner Merritt Paulson expressed his desire to host summer concerts at the stadium.

In 2010, PGE park was a filming location of Season 2 of the television show Leverage. The episode was depicted a fictional Massachusetts (where the series was set) minor league team also known as the Beavers.[33]

The field has been home to a feral cat colony since approximately 1985,[34] which may have been at the park before the current stadium opened in 1926.[35] There are an estimated 12–19 cats in the colony,[34] referred to as "living rat traps".[36] After a construction worker killed a feral cat in 2000,[35] the park enlisted the Feral Cat Coalition of Oregon to assist the animals during construction efforts and to run a trap-neuter-return program.[34] The cats are discussed in Chuck Palahniuk's travelogue of Portland, Fugitives and Refugees.[34][35]