The Province of Alessandria (Italian: Provincia di Alessandria) is an Italian province, with a population of some 430,000, which forms the southeastern part of the region of Piedmont. The provincial capital is the city of Alessandria.

The province was created by the Royal Decree n. 3702 of 23 October 1859, the Legge Rattazzi, as a union of five of the six provinces which had formed the Division of Alessandria (the provinces of Alessandria, Acqui, Asti, Casale and Tortona) plus the Province of Novi which had formed part of the Division of Genoa. In 1935 the area of Asti was established as the separate Province of Asti.

There are 190 communes in the province (source: Italian institute of statistics (Istat), see this link). The main communes by population are the following: 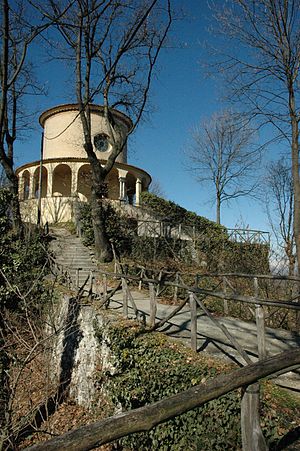 The Sacred Mountain of Crea (Italian: Sacro Monte di Crea) is a Roman Catholic Devotional Complex in the comune of Serralunga di Crea (Montferrat), near Alessandria. It is one of the nine Sacri Monti of Piedmont and Lombardy, included in UNESCO World Heritage list.
Its construction was begun in 1589, around a former Sanctuary of St. Mary whose creation is traditionally attributed to Saint Eusebius of Vercelli around 350 AD.