Province of Armagh (Church of Ireland) 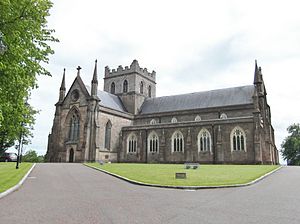 Dioceses in the province

There are seven suffragan dioceses in the Province, which cover all of Northern Ireland and, in the Republic of Ireland, the counties of Donegal, Monaghan, Cavan, Louth, Leitrim, Sligo, Roscommon (except for its very south), Longford, Mayo and the northern half of County Galway. It covers approximately half of the island of Ireland.