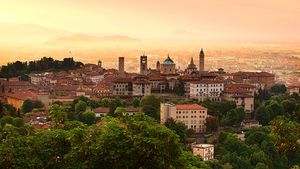 In the east, Lake Iseo forms its boundary which the Oglio from the Camonica Valley flows through. Minerals are found in the area of Trescore Balneario and San Pellegrino (the source of the mineral water of the same name) and other places.

The low lying areas are rich in pastures along with corn, wine, grain, rice and flax that are cultivated. Hunting is common. Very common is also the breeding of poultry, pigs with modern techniques, and the traditional sheep herding.

The province of Bergamo economy is based on SMEs, so it is not easy to speak of main activities as varied products are made. The main heavy industries of the province of Bergamo are mineral processing, especially iron, concrete and marble. There is a large tractor plant, in Treviglio, and a large pipe plant, in Dalmine. Silks, metallurgical products and clothing are also common products. A Heineken Italia brewery makes Moretti La Rossa in Comun Nuovo. Bergamo masons and assemblers are very famous for their ability and dedication to work.

As of 2011, the main municipality areas (comuni) by population are:

As the end of 2006 the province of Bergamo host 92,000 immigrants from country outside the European union (less than 10% of the total population).

About 15.000 of them came from Bolivia, especially the city of Cochabamba, due to the strong relations of the Roman Catholic Diocese of Bergamo and the Archdiocese of Cochabamba.[2] Most of Bolivians reside in the town of Bergamo.