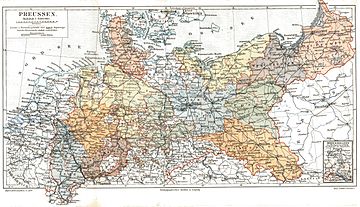 The twelve Prussian provinces on an 1895 map

The Provinces of Prussia constituted the main administrative divisions of Prussia upon the Stein-Hardenberg Reforms.

Following the dissolution of the Holy Roman Empire in 1806 and the Congress of Vienna in 1815, the various German states gained nominal sovereignty. However, the reunification process that culminated in the creation of the German Empire in 1871, produced a country that was constituted of several principalities and dominated by one of them, the Kingdom of Prussia after it had ultimately defeated its Austrian rival. Its territory covered some 60 percent of the territory that was to become the German Reich. 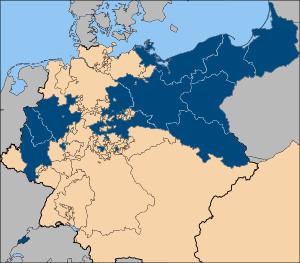 Provinces of Prussia in the German Confederation, 1818.

The German Confederation was establisheded at the Congress of Vienna in 1815 and the Kingdom of Prussia was a member until the dissolution in 1866 following the Austro-Prussian War.

The Prussian state was initially subdivided into ten provinces. The Prussian government appointed the heads of each province known as Oberpräsident (i.e. upper president). The Oberpräsident represented the Prussian government in the province, and was busy with implementing and supervising central prerogatives of the Prussian government. The provinces of Prussia were further subdivided into government regions (Regierungsbezirke), subject to the upper presidents. As to self-rule each province also had a provincial diet (Provinziallandtag in German), the members of which were elected in indirect election by county councillors and city councillors of the constituent rural counties and independent cities.

In 1822 the Rhine Province was created from the Lower Rhine and Jülich-Cleves-Berg provinces.

In 1829 the Province of Prussia was created by the merger of the West Prussian and East Prussian provinces, lasting until 1878. Congruent with the Kingdom of Prussia proper (i.e. former Ducal and Royal Prussia), its territory, like the Greater Polish territory of Posen, was not part of the German Confederation. 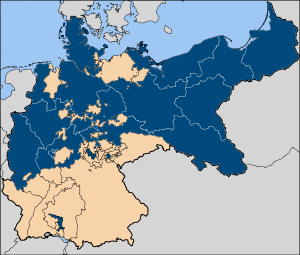 Provinces of Prussia in the German Empire, 1914.

The outcome of the Austro-Prussian War put an end to the aspirations of a grand unified state consisting of the countries in both Germany and Austria. Instead the North German Confederation was created under Prussian leadership, and following the Franco-Prussian War the German Empire was proclaimed in 1871. The German Empire was dissolved in 1918 following World War I. From 1875 on the provinces were bodies combining regional home rule through representatives delegated from each rural and urban county (German: Landkreis and Stadtkreis), forming the provincial diet (German: Provinziallandtag with a 6 year term), which elected from its midst a head of this self-administration, the Landesdirektor (with a 6 to 12 year term), and a provincial government (German: Provinzialausschuss, provincial committee) as well as part of the superordinated overall Prussian royal administration, supervising - on a provincial range - the self-governing municipalities and counties as well as each governorate (German: Regierungsbezirk, mere supervising bodies of the Prussian government). For this purpose the respective Prussian minister of interior affairs appointed an upper president (German: Oberpräsident) to each province, who fulfilled his task with the help of a Prussian government-appointed provincial council (German: Provinzialrat). 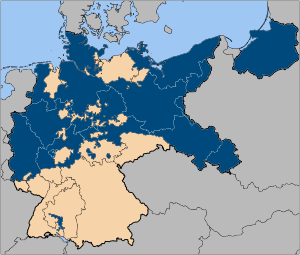 Provinces of Prussia in the Weimar Republic, 1928.

Prussia had to cede virtually all territory belonging to the provinces of Posen and West Prussia to the newly created state of Poland and the League of Nations mandate of the Free City of Danzig. Smaller areas had been ceded to Belgium (East Cantons, formerly Rhineland), Czechoslovakia (Hlučín Region, formerly Silesia), Denmark (Northern Schleswig, formerly Schleswig-Holstein), the League of Nations mandate of the Memel Territory (formerly East Prussia), Poland (eastern Upper Silesia, formerly Prov. of Silesia), and the Mandatory Saar (League of Nations) (formerly Rhineland).

Prussia and its provinces formally continued to exist even though political control was eventually taken over by the National Socialist German Workers Party following their rise to power in 1933. Both Prussia and Nazi Germany was finally dissolved following the end of World War II in 1945.