From Infogalactic: the planetary knowledge core
(Redirected from Provost Marshal)
Jump to: navigation, search
This article is about military usage of the term provost. For other uses, see Provost (disambiguation). 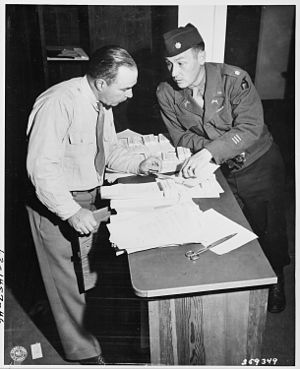 A provost marshal is a title given to a person in charge of a group of military police (MP). The title originated with an older term for military police, provosts. While a provost marshal is now usually a senior commissioned officer, he/she may be a person of any rank, who commands any number of MPs; historically, the title was sometimes applied to civilian officials, especially under conditions of martial law, or when a military force had day-to-day responsibility for some or all aspects of civilian law enforcement (such as some British colonies). A Provost marshal may also oversee security services, imprisonment, fire/emergency services and ambulances.

The chief of the German Military Police (Feldjäger) is called General der Feldjägertruppe (equivalent to provost marshal general). The German Armed Forces (Bundeswehr) do not have a specific title for military police officers so in most tactical units and especially in multinational deployments, they will use the English term provost marshal.

The senior MP officer at the theater, corps, division, and brigade level and for each garrison is known as a provost marshal. In many US Army garrisons, a provost marshal is at times also responsible for the provision of fire and physical security as well as law enforcement services and thus is also referred to as the Director of Emergency Services.