A proxy wedding or (proxy marriage) is a wedding in which one or both of the individuals being united are not physically present, usually being represented instead by other persons. If both partners are absent a double proxy wedding occurs.

Marriage by proxy is usually resorted to either when a couple wish to marry but one or both partners cannot attend for reasons such as military service, imprisonment, or travel restrictions; or when a couple lives in a jurisdiction in which they cannot legally marry.

Proxy weddings are not recognized as legally binding in most jurisdictions: both parties must be present. A proxy marriage contracted elsewhere may be recognised where proxy marriage within the jurisdiction is not; for example, Israel recognises proxy marriages abroad between Israelis who might not have been permitted to marry in Israel. 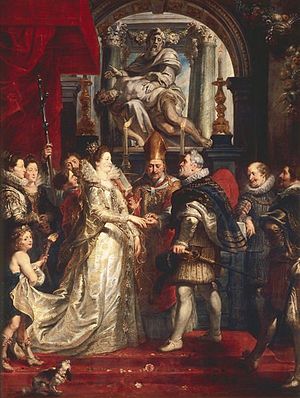 European monarchs and nobility sometimes married by proxy in the Medieval Ages and in the early Modern Age. A well-known example more recently involved the marriage of Napoleon I of France and the Austrian Archduchess Marie Louise in 1810. Another famous example is the marriage of Mary, Queen of Hungary to Louis I, Duke of Orléans in 1385. Catherine of Aragon wed Prince Arthur by proxy in 1499. A famous 17th-century painting by Peter Paul Rubens depicts the proxy marriage of Marie de' Medici in 1600.[1]

As of 2015[update], various Internet sites offer to arrange proxy and double-proxy marriages for a fee, although the service can generally be set up by any lawyer in a jurisdiction that offers proxy marriage. Video conferencing allows couples to experience the ceremony together.[2] A unique "space wedding" took place on August 10, 2003 when Ekaterina Dmitriev married Yuri Malenchenko, a cosmonaut orbiting the Earth in the International Space Station, by proxy in Texas, USA.[3]

During the early 1900s, US proxy marriages increased significantly when many Japanese picture brides arrived at Angel Island, California. Since the early 20th century, it has been most commonly used in the USA for marriages where one partner is a member of the military on active duty.[1] In California, proxy marriage is only available to deployed military personnel; in Montana, it is available if one partner is on active military duty or is a Montana resident.

Mexico and Paraguay both offer proxy marriages for a fee. Proxy marriages through the consulate of Paraguay in Tel Aviv are recognized by Israeli law.

Italy permits proxy marriages to Italian soldiers in times of war. Canada ended any form of proxy marriage where one or both spouses are not present, with the exception of men and women in the Canadian armed forces. This became effective on June 11, 2015.