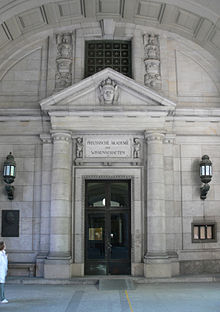 Entrance to the former Prussian Academy of Sciences on Unter Den Linden 8. Today it houses the Berlin State Library.

The Royal Prussian Academy of Sciences (German: Königlich-Preußische Akademie der Wissenschaften) was an academic academy established in Berlin on 11 July 1700, four years after the Akademie der Künste or "Arts Academy", to which "Berlin Academy" may also refer.[1][2][3]

Prince-elector Frederick I of Brandenburg founded the academy under the name of Kurfürstlich Brandenburgische Societät der Wissenschaften ("Electoral Brandenburg Society of Sciences") upon the advice of Gottfried Leibniz, who was appointed president. Unlike other academies, the Prussian Academy was not directly funded out of the state treasury. Frederick granted it the monopoly on producing and selling calendars in Brandenburg, a suggestion by Leibniz. As Frederick was crowned "King in Prussia" in 1701, creating the Kingdom of Prussia, the academy was renamed Königlich Preußische Sozietät der Wissenschaften ("Royal Prussian Society of Sciences"). While other academies focused on a few topics, the Prussian Academy was the first to teach both sciences and humanities. In 1710, the academy statute was set, dividing the academy in two sciences and two humanities classes. This was not changed until 1830, when the physics-mathematics and the philosophy-history classes replaced the four old classes.[1][2]

The reign of King Frederick II ("Frederick the Great") saw major changes to the academy. In 1744, the Nouvelle Société Littéraire and the Society of Sciences were merged into the Königliche Akademie der Wissenschaften ("Royal Academy of Sciences"). An obligation from the new statute were public calls for ideas on unsolved scientific questions with a monetary reward for solutions. The academy acquired its own research facilities in the 18th century: an observatory in 1709, an anatomical theater in 1717, a Collegium medico-chirurgicum in 1723, a botanical garden in 1718, and a laboratory in 1753. However, those were taken over by the University of Berlin

Aarsleff notes that before Frederick came to the throne in 1740, the Academy was overshadowed by similar bodies in London and Paris. Frederick made French the official language and speculative philosophy the most important topic of study. The membership was strong in mathematics and philosophy and included Immanuel Kant, Jean D'Alembert, Pierre-Louis de Maupertuis, and Etienne de Condillac. However the Academy was in a crisis for two decades at mid-century, due to scandals and internal rivalries such as the debates between Newtonianism and Leibnizian views, and the personality conflict between Voltaire and Maupertuis. At a higher level Maupertuis, the director 1746-59 and a monarchist, argued that the action of individuals was shaped by the character of the institution that contained them, and they worked for the glory of the state. By contrast d' Alembert took a republican rather than monarchical approach and emphasized the international Republic of Letters as the vehicle for scientific advance.[4] By 1789, however, the academy had gained an international repute while making major contributions to German culture and thought. Frederick invited Joseph-Louis Lagrange to succeed Leonhard Euler as director; both were world-class mathematicians. Other intellectuals attracted to the philosopher's kingdom were Francesco Algarotti, d'Argens, and Julien Offray de La Mettrie. Immanuel Kant published religious writings in Berlin which would have been censored elsewhere in Europe.[1][2][5]

Beginning in 1815, research businesses led by academy committees (such as the Greek-Roman Archeology Committee or the Oriental Committee) were founded at the academy. They employed mostly scientists to work alongside the corresponding committee's members. University departments emanated from some of these businesses after 1945.

Under Nazi rule (1933–1945), the academy was subject to the Gleichschaltung. However, compared with other institutions like the universities, Jewish employees and members were expelled not beginning with 1933 but only after 1938, following a direct request by the Ministry of Education.[6] The new academy statute went in effect on 8 June 1939, reorganizing the academy according to the Nazi leader principle.

Following World War II, the Soviet Military Administration in Germany or SMAD reorganized the academy under the name of Deutsche Akademie der Wissenschaften zu Berlin (English: German Academy of Sciences at Berlin) on 1 July 1946. In 1972, it was renamed Akademie der Wissenschaften der DDR or AdW (English: Academy of Sciences of the GDR). At its height, the AdW had 400 researchers and 24,000 employees in locations across East Germany. Following German Reunification, the academy was disbanded and the Berlin-Brandenburgische Akademie der Wissenschaften ("Berlin-Brandenburg Academy of Sciences and Humanities") was founded in its place, in compliance with a 1992 treaty between the State Parliaments of Berlin and Brandenburg. 60 of the AdW members broke off and created the private Leibniz Society in 1993.[7]