The Russo-Ottoman War of 1710–11, also known as the Pruth River Campaign after the main event of the war, erupted as a consequence of the defeat by the Russian Empire of Sweden in the Battle of Poltava and the escape of the wounded Charles XII of Sweden to the court of the Ottoman Sultan Ahmed III.[4] Following incessant Russian pressure and demands for Charles, the Ottomans declared war on Russia on 20 November 1710.[5] Concurrently with these events, the Prince Dimitrie Cantemir of Moldavia and Peter the Great signed the Treaty of Lutsk (13 April 1711), by which Moldavia pledged to support Russia in its war against the Ottomans with troops and by allowing the Russian army to cross its territory and place garrisons in Moldavian fortresses. After having gathered near the Moldavian capital Iași, the combined army started on 11 July the march southwards along the Prut River with the intention of crossing the Danube and invade the Balkan peninsula. 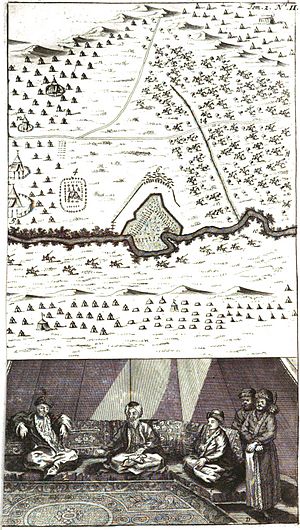 The main and decisive event of the conflict was the four-day Battle of Stănileşti (started on 18 July), an ill-prepared operation on the Prut floodplain during which the joint Moldavian and Russian troops, the former under the command of Cantemir and the latter under Peter the Great and Boris Sheremetev, were surrounded and forced to surrender (on 22 July) to the larger Ottoman army commanded by Grand Vizier Baltacı Mehmet Pasha.[6]

As the Russo-Moldavian army moved along the Prut, a portion of the Russian army under General Carl Ewald von Rönne moved towards Brăila, a major port town located on the left bank of the Danube (in Wallachia) but administered directly by the Ottomans as a kaza. The Russian army met with a portion of the Wallachian army commanded by Spatharios (the second-highest military commander after the Prince) Toma Cantacuzino, who disobeyed the orders of the Prince Constantin Brâncoveanu and joined the Russians. The two armies assaulted and conquered Brăila after a two-day siege (13–14 July 1711).[7]

The conflict was ended on 21 July by the Treaty of the Pruth, to the disappointment of Charles XII. The Treaty stipulated to return Azov to the Ottomans; Taganrog and several Russian fortresses were to be demolished; while the Tsar pledged to stop interfering into the affairs of the Polish-Lithuanian Commonwealth.

The Ottomans also demanded that Charles XII be granted safe passage to Sweden and asked the Tsar to hand over Cantemir. Although Peter acquiesced to all demands, he refused to fulfill the latter, under the pretext that Cantemir had fled his camp.[8]

Alexander Mikaberidze argues that Baltacı Mehmet Pasha made an important strategic mistake by signing the treaty with relatively easy terms for the Russians.[9] Since Peter himself was commanding the Russian army, and had Baltacı Mehmet Pasha not accepted Peter's peace proposal and pursued to capture him as a prisoner instead, the course of history could have changed. Without Peter, Russia would have hardly become an imperial power, and the future arch-enemy of the Ottoman State in the Balkans, the Black Sea basin and the Caucasus.

Although the news of the victory was first received well in Constantinople, the dissatisfied pro-war party turned general opinion against Baltacı Mehmet Pasha, who was accused of accepting a bribe from Peter the Great. Baltacı Mehmet Pasha was then relieved from his office.[10]

An immediate consequence of the war was the change in Ottoman policies towards the Christian vassals states of Moldavia and Wallachia; in order to consolidate the control over the two Danubian Principalities, the Ottomans would introduce (in the same year in Moldavia, and in 1716 in Wallachia) direct rule through appointed Christian princes (the so-called Phanariotes). Prince Cantemir of Moldavia fled to Russia accompanied by a large retinue, and the Ottomans took charge of the succession to the throne of Moldavia by appointing Nicholas Mavrocordatos as ruler. Prince Constantin Brâncoveanu of Wallachia was accused by the Sultan of colluding with the enemy. When the Russo-Moldavian army was on the move, Brâncoveanu had gathered Wallachian troops in Urlați, near the Moldavian border, awaiting the entry of the Christian troops to storm into Wallachia and offer his services to Peter, while also readying to join the Ottoman counter-offensive in the event of a change in fortunes. When Toma Cantacuzion switched to the Russian camp, the prince saw himself forced to decide in favor of the Ottomans or risk becoming an enemy of his Ottoman suzerain, and swiftly returned the gifts he had previously received from the Russians. After three years, the Sultan's suspicion and hostility finally prevailed, and Brâncoveanu, his four sons, and his counselor Ianache Văcărescu, were arrested and executed in Constantinople.

Charles XII and his political pro-war ally, the Crimean khan Devlet II Giray, continued their lobbying to have the Sultan declare another war. On next Spring the pro-war party, which accused the Russians of delaying to meet the terms negotiated in the peace treaty, came close to achieving their goal. War was avoided by diplomatic means and a second treaty was signed on 17 April 1712. A year after this new settlement, the war party succeeded, this time accusing the Russians of delaying in their retreat from Poland. Ahmed III declared another war on 30 April 1713.[11] However, there were no significant hostilities and another peace treaty was negotiated very soon. Finally the Sultan became annoyed by the pro-war party and decided to help the Swedish king to return to his homeland. Ahmed III also deposed Devlet II Giray from the throne of the Crimean Khanate and sent him into exile to the Ottoman island of Rodos because he didn't show enough respect to Charles XII during the campaigns against Russia (Devlet II Giray considered Charles XII a prisoner and ignored his commands.) Charles XII left the Ottoman Empire for Stralsund in Swedish Pomerania which by then was besieged by troops from Saxony, Denmark, Prussia and Russia.