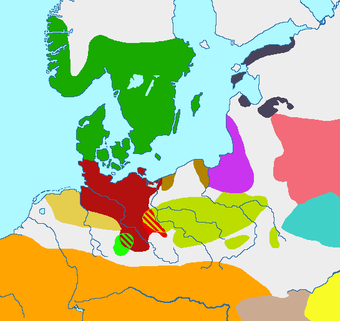 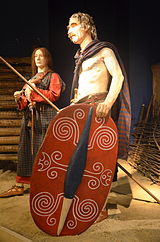 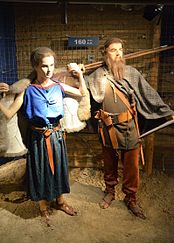 Reconstruction of a Germanic Iron Age warrior's garments representing a Vandalic man, his arms outstretched and his hair in a "Suebian knot" (170 AD), Kraków.

The Przeworsk[1] culture is part of an Iron Age archaeological complex that dates from the 3rd century BC to the 5th century AD.[2]

It was located in what is now central and southern Poland - the upper Oder to the Vistula basin, later spreading to parts of eastern Slovakia and Subcarpathia ranging between the Oder and the middle and upper Vistula Rivers and extending south towards the middle Danube into the headwaters of the Dniester and Tisza Rivers. It takes its name from the village near the town Przeworsk where the first artifacts were found.

The Przeworsk culture people lived in small, unprotected villages, populated each by a few dozen residents at most, made up of several houses, usually set partially below the ground level (semi-sunken), each covering an area of 8–22 square meters. They knew how to dig and build wells, so the settlements didn't have to be located near bodies of water. Thirteen 2nd century wells with variously constructed timber lined walls were found at a settlement in Stanisławice, Bochnia County.[3][4] Fields were being used for crop cultivation for a while and then as pastures, when animal excrement helped the soil regain fertility. Once iron share plows were introduced the fields were alternated between tillage and grazing.

Several or more settlements made up a micro-region, within which the residents cooperated economically and buried their dead in a common cemetery, but which was separated from other micro-regions by undeveloped areas. A number of such micro-regions possibly made up a tribe, with the these separated by empty space, zones "of mutual fear", as Tacitus put it. The tribes in turn, especially if they were culturally closely related, would at times form larger structures, such as temporary alliances for waging wars, or even early statehood forms.[5]

A Przeworsk culture turn of the millennium industrial complex for the extraction of salt from salt springs was discovered in Chabsk near Mogilno.[6]

Examinations of the burial grounds, of which even the largest used continuously over periods of up to several centuries, contains no more than several hundreds graves, shows that the overall population density was low.[7] The dead were cremated and the ashes sometimes placed in urns, which had the mid-part in the form of an engraved bulge. In the 1st century AD this was replaced with a sharp-profiled (with a horizontal ridge around the circumference) shape.

In Siemiechów a grave of a warrior who must have taken part in the Ariovistus expedition during the 70–50 BC period was found; it contains Celtic weapons and an Alpine region manufactured helmet used as an urn, together with local ceramics. The burial gifts were often, for unknown reasons, bent or broken, and then burned with the body. The burials range from "poor" to "rich", the latter ones supplied with fancy Celtic and then Roman imports, reflecting a considerably by this time developed social stratification.[5] 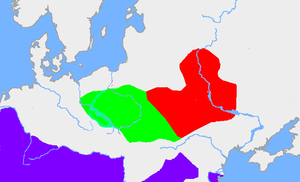 To the east, in what is now northern Ukraine and southern Belarus, was the Zarubintsy culture. Much of this area was subsequently absorbed by the Wielbark culture.[9]

The main characteristic feature of the Przeworsk culture are burials. These were mostly cremations, with occasional inhumation. Warrior burials are notable, which often include horse-gear and spurs. Some burials are exceptionally rich, overshadowing the graves of Germanic groups further west, especially after 400 AD.[10] Pottery and metalwork are often rich and show a great variety [11]

The culture's decline in the late 5th century coincides with the invasion of the Huns. Other factors may have included the social crisis that occurred as a result of the collapse of the Roman world and the trade contacts it maintained with peoples beyond its borders.[12] In the late 5/6th century, the Prague-Korchak culture appears in the Vistula basin.