From Infogalactic: the planetary knowledge core
Jump to: navigation, search
This article is about the psychopomp in religion, mythology and psychology. For the song, see Psychopomp (song).
"Psychopomps" redirects here. For the Danish band, see Psychopomps (band). 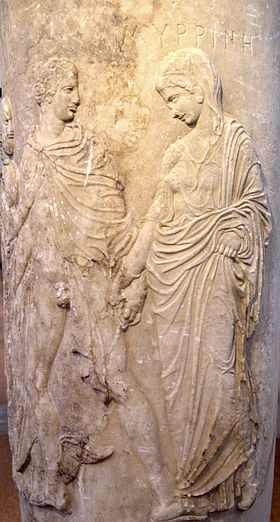 Psychopomps (from the Greek word ψυχοπομπός - psuchopompos, literally meaning the "guide of souls")[1] are creatures, spirits, angels, or deities in many religions whose responsibility is to escort newly deceased souls from Earth to the afterlife. Their role is not to judge the deceased, but simply to provide safe passage. Frequently depicted on funerary art, psychopomps have been associated at different times and in different cultures with horses, whip-poor-wills, ravens, dogs, crows, owls, sparrows, cuckoos, and harts. When seen as birds, they are often seen in huge masses, waiting outside the home of the dying.

Classical examples of a psychopomp in Greek, Roman and Egyptian mythology are Charon,[1] Vanth, Hermes, Hecate, Mercury and Anubis. In many beliefs, when a spirit is being taken to the underworld, they will be violently ripped from their bodies.[2]

The most common contemporary example of a psychopomp appearing in popular culture is the Grim Reaper, which dates from 15th-century England and has been adopted into many other cultures around the world over the years; for instance, the shinigami in Japanese culture today is mostly based on the imported Grim Reaper myth.

In Jungian psychology, the psychopomp is a mediator between the unconscious and conscious realms. It is symbolically personified in dreams as a wise man or woman, or sometimes as a helpful animal. In many cultures, the shaman also fulfills the role of the psychopomp. This may include not only accompanying the soul of the dead, but also vice versa: to help at birth, to introduce the newborn child's soul to the world.[3](p36) This also accounts for the contemporary title of "midwife to the dying", or "End of Life Doula", which is another form of psychopomp work.

In Filipino culture, dead relations function as psychopomps. When the dying call out to specific dead persons (e.g. parents, partners), the spirits of the latter are supposedly visible to the former. The spirits, who traditionally wait at the foot of the deathbed, fetch (Tagalog: sundô) the soul soon after death and escort it into the afterlife.