From Infogalactic: the planetary knowledge core
Jump to: navigation, search
This article is about the royal family. For the territorial state over which it ruled, see Ptolemaic Kingdom. 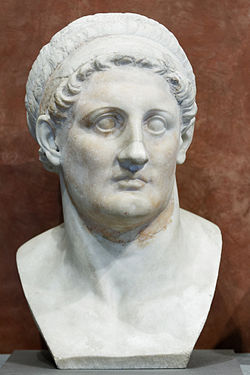 The Ptolemaic dynasty /ˌtɒləˈmeɪ.ᵻk/ (Ancient Greek: Πτολεμαῖοι, Ptolemaioi), sometimes also known as the Lagids /ˈlædʒᵻdz/ or Lagidae /ˈlædʒᵻˌdiː/ (Ancient Greek: Λαγίδαι, Lagidai, after Lagus, Ptolemy I's father), was a Macedonian Greek[1][2][3][4][5] royal family which ruled the Ptolemaic Kingdom in Egypt during the Hellenistic period. Their rule lasted for 275 years, from 305 BC to 30 BC. They were the last dynasty of ancient Egypt.

Ptolemy, one of the seven somatophylakes (bodyguards) who served as Alexander the Great's generals and deputies, was appointed satrap of Egypt after Alexander's death in 323 BC. In 305 BC, he declared himself King Ptolemy I, later known as "Soter" (saviour). The Egyptians soon accepted the Ptolemies as the successors to the pharaohs of independent Egypt. Ptolemy's family ruled Egypt until the Roman conquest of 30 BC.

All the male rulers of the dynasty took the name Ptolemy. Ptolemaic queens, some of whom were the sisters of their husbands, were usually called Cleopatra, Arsinoe or Berenice. The most famous member of the line was the last queen, Cleopatra VII, known for her role in the Roman political battles between Julius Caesar and Pompey, and later between Octavian and Mark Antony. Her apparent suicide at the conquest by Rome marked the end of Ptolemaic rule in Egypt.

Dates in brackets represent the regnal dates of the Ptolemaic pharaohs. They frequently ruled jointly with their wives, who were often also their sisters. Several queens exercised regal authority, but the most famous and successful was Cleopatra VII (51–30 BC), with her two brothers and her son as successive nominal co-rulers. Several systems exist for numbering the later rulers; the one used here is the one most widely used by modern scholars.

Other members of the Ptolemaic dynasty

Contemporaries describe a number of the Ptolemaic dynasty as extremely obese, whilst sculptures and coins reveal prominent eyes and swollen necks. Familial Graves' disease could explain the swollen necks and eye prominence (exophthalmos), although this is unlikely to occur in the presence of morbid obesity.

In view of the familial nature of these findings, members of this dynasty likely suffered from a multi-organ fibrotic condition such as Erdheim–Chester disease or a familial multifocal fibrosclerosis where thyroiditis, obesity and ocular proptosis may have all occurred concurrently.[6]