Ptolemy III Euergetes (Greek: Πτολεμαῖος Εὐεργέτης, Ptolemaĩos Euergétēs, reigned 246–222 BC) was the third king of the Ptolemaic dynasty in Egypt.

Euergetes ("Benefactor") was the eldest son of Ptolemy II Philadelphus and his first wife, Arsinoe I, and came to power in 246 BC upon the death of his father. He married Berenice of Cyrene in the year corresponding to 244/243 BC; and their children were: 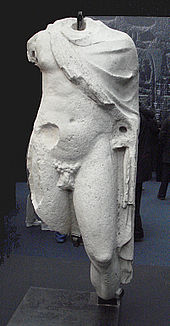 Statue of Ptolemy III in the guise of Hermes wearing the chlamys cloak. Ptolemaic Egypt.

Ptolemy III Euergetes was responsible for the first known example of a series of decrees published as bilingual inscriptions on massive stone blocks in three writing systems. His stone stela is the Canopus Stone of 238 BC. Other well-known examples are the Memphis Stele (Memphis Stone), bearing the Decree of Memphis, about 218 BC, passed by his son, Ptolemy IV, as well as the famous Rosetta Stone erected by Ptolemy Epiphanes, his grandson, in 196 BC.

Ptolemy III's stone contains decrees about priestly orders, and is a memorial for his daughter Berenice. But two of its 26 lines of hieroglyphs decree the use of a leap day added to the Egyptian calendar of 365 days, and the associated changes in festivals.

He is also credited with the foundation of the Serapeum, as well as the temple of Horus at Edfu, which he commissioned in about 237 BC, although the main temple would not be finished until the reign of his son, Ptolemy IV, in 231 BC, and it would not be officially opened until 142 BC, during the reign of Ptolemy VIII. Also, the reliefs on the great pylon were only completed in the reign of Ptolemy XII. He, like many Pharaohs before him, also added to the Temple of Karnak.

Due to a falling out at the Seleucid court, Ptolemy's eldest sister Berenice Phernophorus was murdered along with her infant son. In response Ptolemy III invaded Syria.[6] During this war, the Third Syrian War, he occupied Antioch and even reached Babylon.[7] In exchange for a peace in 241 BC, Ptolemy was awarded new territories on the northern coast of Syria, including Seleucia Pieria, the port of Antioch. From this capture he received fifteen hundred talents of silver, roughly a tenth of his annual income. During his involvement in the Third Syrian War, he managed to regain many Egyptian works of art that had been stolen when the Persians conquered Egypt. While he was away fighting, he left his wife, Berenice II, in charge of the country, but swiftly returned when trouble erupted there. The Ptolemaic kingdom reached the height of its power during this reign.

The Third Syrian War is cryptically alluded to in Daniel 11:7-9.[8]

He maintained his father's foreign policy of subduing Macedonia by supporting its enemies. Ptolemy backed the Achaean League, a collaboration of Greek city-states, and enemies of Macedonia, but switched his support to Sparta when it came into conflict with the Achaean League and proved itself more apt to fighting the Macedonians.

He continued his predecessors' work on Alexandria, especially in the Great Library. He had every book unloaded in the Alexandria docks seized, had copies made of each one, and gave the copies to the previous owners while the original copies were kept in the Library. It is said that he borrowed works of Aeschylus, Sophocles and Euripides from Athens, but deciding to forfeit the considerable deposit he paid for them, he didn't give them back, and instead kept them for the Alexandrian Library.

He was even more liberal towards Egyptian religion than his predecessors. He supported, promoted, and contributed towards various cults, particularly those of the Apis and Mnevis Bulls, as is stated in the Canopus Decree of 238 BC, in which the Egyptian priesthood praise him and his wife as "Benefactor Gods" for this religious support, as well as for maintaining peace by strong national security, and for good governance, including when he imported, at his own expense, a vast amount of grain to compensate for a weak inundation.

Ptolemy III's reign was also marked by trade with other contemporaneous polities. In the 1930s, excavations by Mattingly at a fortress close to Port Dunford (the likely Nikon of antiquity) in present-day southern Somalia yielded a number of Ptolemaic coins. Among these pieces were 17 copper mints from the Ptolemy III to Ptolemy V dynasties, as well as late Imperial Rome and Mamluk Sultanate coins.[9]