From Infogalactic: the planetary knowledge core
(Redirected from Ptolemy V)
Jump to: navigation, search
For other uses, see Epiphanes (disambiguation).

Ptolemy V Epiphanes (Ancient Greek: Πτολεμαῖος Ἐπιφανής, Ptolemaĩos Epiphanḗs, reigned 204–181 BC), son of Ptolemy IV Philopator and Arsinoe III of Egypt, was the fifth ruler of the Ptolemaic dynasty. He inherited the throne at the age of five, and under a series of regents, the kingdom was paralyzed. The Rosetta Stone was produced during his reign as an adult. 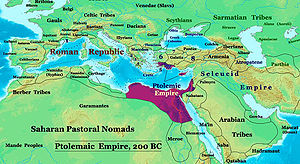 Ptolemaic Empire in 200 BC, during the reign of Ptolemy V (before the second invasion of Antiochus III)

Ptolemy Epiphanes was only a small boy when his father, Ptolemy Philopator, died. Philopator's two leading favorites, Agathocles and Sosibius, fearing that Arsinoe would secure the regency, had her murdered before she heard of her husband's death, thereby securing the regency for themselves. However, in 202 BC, Tlepolemus, the general in charge of Pelusium, put himself at the head of a revolt. Once Epiphanes was in the hands of Tlepolemus he was persuaded to give a sign that his mother's killers should be killed. The child king gave his consent, it is thought more from fear than anything else, and Agathocles along with several of his supporters were killed by the Alexandrian mob.[2]

War with Egypt and Macedonia

Antiochus III the Great and Philip V of Macedon made a pact to divide the Ptolemaic possessions overseas. Philip seized several islands and populated places in Caria and Thrace, whilst the Battle of Panium (198 BC) definitively transferred Coele-Syria, including Judea, from the Ptolemies to the Seleucids.

Antiochus then concluded peace, giving his own daughter Cleopatra I to Epiphanes in marriage (193–192 BC). Nevertheless, when war broke out between Antiochus and Rome, Egypt ranged itself with the latter power.

In manhood, Epiphanes was a passionate sportsman; he excelled in athletic exercises and the chase.

Great cruelty and treachery were displayed in the suppression of the native rebellion, and some accounts represent Epiphanes as personally tyrannical. In 197 BC, Lycopolis was held by the forces of Ankmachis (also known as Chaonnophris), the secessionist pharaoh of Upper Egypt, but he was forced to withdraw to Thebes. The war between North and South continued until 185 BC with the arrest of Ankmachis by Ptolemaic General Conanus.

In 183 BC/184 BC, the rebels in Lower Egypt surrendered on the basis of terms that Epiphanes had personally promised to honor. However, showing himself treacherous and vindictive, he had them put to death in a cruel manner.[2]

The Memphis Decree, published in three languages on the Rosetta Stone and other stelae, announced the rule and ascension to godhood of Ptolemy V, and contained concessions to the priesthood, and has been termed a reward for the priests' support.[3]

The elder of Ptolemy V's two sons, Ptolemy VI Philometor (181–145 BC), succeeded as an infant under the regency of his mother Cleopatra the Syrian. Her death was followed by a rupture between the Ptolemaic and Seleucid courts, on the old question of Coele-Syria.

Ptolemy V's reign was also marked by trade with other contemporaneous polities. In the 1930s, excavations by Mattingly at a fortress close to Port Dunford (the likely Nikon of antiquity) in present-day southern Somalia yielded a number of Ptolemaic coins. Among these pieces were 17 copper mints from the Ptolemy III to Ptolemy V dynasties, as well as late Imperial Rome and Mamluk Sultanate coins.[4]