Pub games are games played in pubs and bars, particularly traditional games that are or were played in English pubs. Most are indoor games, though some are played outdoors, e.g., in the pub garden or on the village green.

Richard Boston in Beer and Skittles reveals that the first regulation for national control of pubs was about pub games. Henry VII's statute of 1495 restricted "the indoor games which were distracting Tudor pubmen from archery".

Gaming activities associated with pubs included card games such as cribbage, throwing games such as darts, physical sports such as cricket, and blood sports such as cock fighting. Balls Pond Road in Highbury, London was named after an establishment run by Mr Ball that had a pond out the back filled with ducks, where drinkers could, for a certain fee, go out and take their chance at shooting the creatures.[1]

All of the above games were still played in at least some English pubs in the 1970s, but many were in decline and some may since have died out. 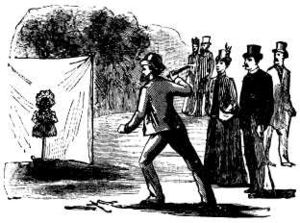 Aunt Sally was traditionally played in pubs and fairgrounds. An Aunt Sally was originally a figurine head of an old woman with a clay pipe in her mouth, or subsequently a ball on a stick. The object was for players to throw sticks at the head in order to break the pipe. The game bears some resemblance to a coconut shy, or skittles.

Today, the game of Aunt Sally is still played as a pub game in Oxfordshire. The ball is on a short plinth about 10 cm high, and is known as a 'dolly'. The dolly is placed on a dog-legged metal spike and players throw sticks or short battens at the dolly, trying to knock it off without hitting the spike.

Bar billiards in its current form started in the UK in the 1930s. The tables were made by the Jelkes company of Holloway Road in London, and sold to many pubs.

The game is played mostly in southern England and Jersey on a special table without side and corner pockets, but with 9 scoring holes in the playing surface. On the playfield are normally placed three skittles--guarding the highest scoring holes (the two 50 point holes and the 200 point hole). The aim of the game is to score as many points as possible by potting balls down the holes before either the time runs out or a skittle is knocked over. The last ball can only be potted by getting it into the 100 or 200 point hole after bouncing off one cushion.

Devil among the tailors

Main article: Devil among the tailors

Devil among the tailors is a form of table skittles.

The game involves 9 small skittles arranged in a 3 x 3 square, usually within a shallow open-topped wooden box sitting on a table-top. The wooden ball (about the size of a golf ball) hangs from a string or chain attached to the top of a vertical wooden post rising from one corner of the box. The aim of the game is to knock down the skittles by swinging the ball in an arc round the post (rather than aiming directly at the skittles).

In the picturesque name, the 'devil' refers to the ball and the 'tailors' are the skittles.

Pitch penny (also called Penny seat, Penny slot, Tossing the penny and Penny in the hole) involves throwing coins across the room and into a hole carved in the seat of a wooden bench.

Ringing the bull involves swinging a bull's nose-ring, which is attached to a string, in an arc so as to hook it onto a bull's horn or hook attached to the wall.

There is a vibrant and thriving tradition of playing this game at what is reputedly the oldest pub in England, Ye Olde Trip To Jerusalem in Nottingham.

The game was adopted by the earlier settlers of the Caribbean islands, where it is also referred to as the Bimini Ring Game.

Shove ha'penny (or shove halfpenny) is played by two players on a small, smooth board, normally made of slate. A number of parallel lines or grooves run horizontally across this board. Ha'pennies or similarly-sized coins or metal discs are placed at one end of the board and are shoved with a quick flick of the hand. The object is to shove the coins so that a certain number of them (normally five) lie between the lines. The two players take alternate turns. In addition to shoving his own coin directly between the lines, a player may use his turn to knock his own coins into position.One set of coins are used by both players.

Toad in the hole

Toad in the hole involves throwing brass discs at a hole in a box. A variation of this game has been played in pubs in East Sussex, UK, the 'hole' being in the centre of a large wooden seat set against the wall, the back of the seat being a surface to rebound one's shot off. Toad in the hole is a more refined version of the coin-throwing game Pitch penny.

As a subset of pub games, pub sports include traditional pastimes such as darts, billiards, and skittles. Unlike parlour games, or gambling games of chance like cards and dice, all of which are also often played in bars, pubs, and taverns, Pub Sports require exertion, coordination, and dexterity in particular physical skills.

Many of these games owe their origins to older outdoor sports, adapted and transformed over time for indoor play. 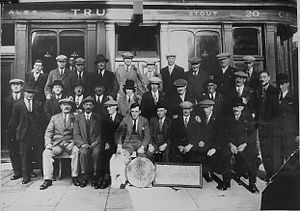