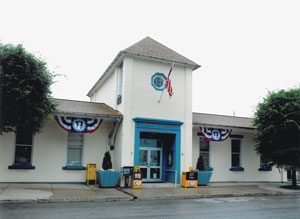 Public Opinion on the corner of Third and King Streets, Chambersburg

Since 1869 when the first edition came off a flatbed press in a Main Street building in downtown Chambersburg Public Opinion has been a part of life in the Cumberland Valley, and the county's most comprehensive source of local news and information.

Public Opinion began as a weekly newspaper and then became a daily first published in the morning, but in 1921 it became an afternoon paper. By 1931, Public Opinion had bought two other newspapers with long histories in Franklin County, The Franklin Repository and Valley Spirit.

Founded by M.A. Foltz, Public Opinion remained in the Foltz family until 1964, when it was purchased by McClure Newspapers.

In 1971, Public Opinion became the 27th newspaper owned by Gannett Co. Inc.,[1] which publishes USA TODAY and the weekly newspaper magazine USA WEEKEND. The latter is an insert in Public Opinion on Sundays.

Public Opinion again became a morning newspaper in 2005, the same year that MediaNews Group Inc.[2] took over controlling ownership as the newspaper's majority partner of the Texas-New Mexico Newspaper Partnership.[3]

MediaNews, headquartered in Denver, Colo., is one of the nation's largest newspaper companies. It publishes 54 daily newspapers in 11 states.

The MediaNews Group-Gannett partnership includes three other south central Pennsylvania newspapers: the York Daily Record and York Sunday News, Lebanon Daily News, and The Evening Sun of Hanover and newspapers in El Paso, Texas and New Mexico. However, in the Spring of 2015, speculation that Gannett would again take control of some of MediaNews Group's holdings, including the Pennsylvania papers, grew.[4] Later in 2015, Gannett acquired full ownership of the Pennsylvania joint venture.[5]

Public Opinion's current home at North Third and East King streets was constructed about 1875 as a passenger station of the Cumberland Valley Railroad and served in that role until 1914. It was later used as a canteen for World War I soldiers passing through town and had a variety of manufacturing uses before 1956, when Public Opinion moved in.

In 2007, Public Opinion replaced its 50-year-old letterpress with a Goss Urbanite offset press, and also introduced a Sunday edition.

Today, the newspaper is Franklin County's largest daily newspaper, with a circulation of about 16,200 Mondays through Saturdays and 18,000 Sundays.

Besides the daily edition and web site, Public Opinion offers its readers and advertisers a complete line of products, ranging from seasonal special sections to preprinted inserts (national coupon inserts on Sundays).

Robert V. Cox won the award for his reporting of a mountain manhunt that ended with the killing of a deranged gunman who had terrorized the community. He also wrote the book Deadly Pursuit,[8] which later was made into a television movie.