From Infogalactic: the planetary knowledge core
Jump to: navigation, search
For other uses, see Public holidays in China (disambiguation).

There are currently seven official public holidays in China. Each year's holidays are announced about three weeks before the start of the year by the General Office of the State Council. A notable feature of mainland Chinese holidays is that weekends are usually swapped with the weekdays next to the actual holiday to create a longer vacation period. The public holiday pattern, described as "notoriously complicated" by a Wall Street Journal journalist,[1] is therefore less predictable than most developed countries. 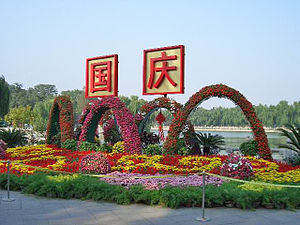 From at least 2000 until this reform, the Spring Festival public holiday began on New Year's Day itself. From 2008 to 2013 it was shifted back by one day to begin on Chinese New Year's Eve. In 2014, New Year's Eve became a working day again, which provoked hostile discussion by netizens and academics.[1][10]

In all these holidays, if the holiday lands on a weekend, the days will be reimbursed after the weekend.

The Chinese New Year and National Day holidays are three days long. The week-long holidays on May (Labor) Day and National Day began in 2000, as a measure to increase and encourage holiday spending. The resulting seven-day holidays are called "Golden Weeks" (黄金周), and have become peak seasons for travel and tourism. In 2008, the Labor Day holiday was shortened to one day to reduce travel rushes to just twice a year, and instead three traditional Chinese holidays were added.

Generally, if there is a three-day holiday, the government will declare it to be a seven-day holiday. However, citizens are required to work during a nearby weekend. Businesses and schools would then treat the affected Saturdays and Sundays as the weekdays that the weekend has been swapped with. Schedules are released late in the year prior and might change during the year.

The following is a graphical schematic of how the weekend shifting works.

The closeness of Labor Day and Youth Day resulted in an unexpectedly long break for schools in 2008 - the Youth Day half-holiday entitlement had been largely forgotten because it has been subsumed into the Golden Week.

There are public holidays celebrate by certain ethnic minorities in certain regions, which are decided by local governments. The following are holidays at province-level divisions, and there are more at lower level divisions.

Some Chinese young adults have begun to celebrate 11 November as Singles Day (Chinese: 光棍节; pinyin: guāng gùn jié) because of the many ones (1s) in the date.[11]