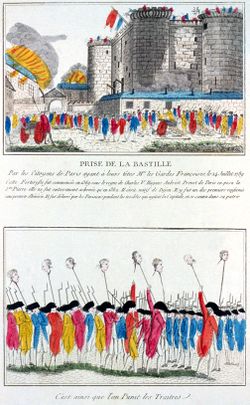 French etching from 1789 depicting the storming of the Bastille, commemorated as Bastille Day

There are 11 official public holidays in France.[1] The Alsace region and the Moselle department observe 2 additional days.[2] Contrary to most countries, these holidays do not shift when they fall during a week-end,[3] which means that the average number of observed public holidays falling on weekdays is 8.7 and ranges from 7 to 10.[4] Most Asian countries and all North American countries observe between 2 and 10 more public holidays per year on weekdays.[5]

Public holidays in France are:

Note: French law dictates that work should stop, but be paid, only for the Fête du Travail (May Day, 1 May),[6] except in industries where it is infeasible to stop working.[7] The rest of the public holidays are listed in statute law,[8] but law does not dictate that work should stop; however a leave from work may be granted by the employer or by convention collective (agreement between employers' and employees’ unions).

In 2005, French prime minister Jean-Pierre Raffarin removed Whit Monday's status as a public holiday. The decision was eventually overruled by French courts in 2008[citation needed]. Employers are free to decide whether to make Whit Monday a day off or not.[9]