India, being a culturally diverse and fervent society, celebrates various holidays and festivals. There are three national holidays in India: Independence Day on b 15 August, Mahatma Gandhi's birthday on 2 October, and Republic Day on 26 January.[1][2] States and regions have local festivals depending on prevalent religious and linguistic demographics. Popular religious festivals include the Sikh festivals like Guru Nanak Jayanti, Hindu festivals of Makar Sankranti, Maha Shivaratri, Diwali, Ganesh Chaturthi, Holi, Dussehra, Islamic festivals of Eid ul-Fitr, Eid al-Adha, Mawlid an-Nabī and Christian festivals of Christmas and days of observances such as Good Friday are observed throughout the country.

The Day of Ashura, (10th day of Muharram), which in the Indian holiday calendar is referred to as Muharram, is observed by many sects of Islam. In addition, the Sikh festivals such as Guru Nanak Gurpurab, the Christian festivals such as Christmas, Good Friday and Jain festivals like Mahavir Jayanti, Paryushan are celebrated in certain areas where these religions have a significant following.The annual holidays are widely observed by state and local governments; however, they may alter the dates of observance or add or subtract holidays according to local custom. 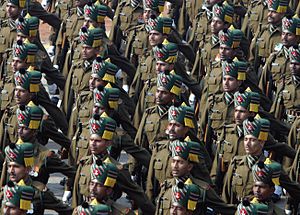 National holidays are observed in all states and union territories. 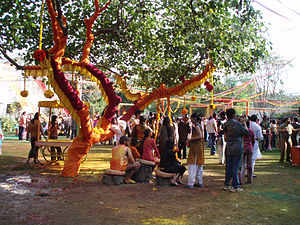 Hindus celebrate a number of festivals all through the year. Hindu festivals have one or more of religious, mythological and seasonal significance. The observance of the festival, the symbolisms used and attached, and the style and intensity of celebration varies from region to region within the country. A list of the more popular festivals is given below:- 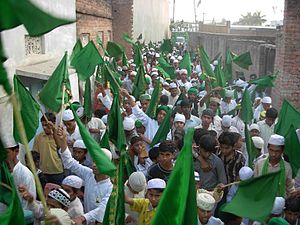 Mawlid or Eid-e-Milād-un-Nabī being celebrated in a town in Uttar Pradesh. 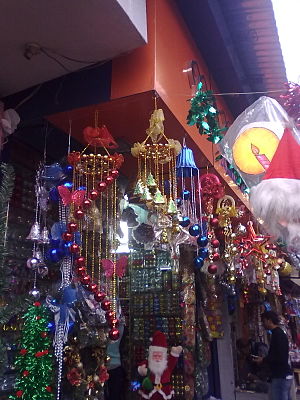 A number of Sikh holidays are Gurpurbs, anniversaries of a guru's birth or death; marked by the holding of a festival.

In addition to the official holidays, many religious, ethnic, and other traditional holidays populate the calendar, as well as observances proclaimed by officials and lighter celebrations. These are rarely observed by Central government and businesses

Issues with large number of holidays

While having so many Government Holidays kept in line with the idea of peaceful co-existence of all religions, there have been demands from various public bodies that the system of a multitude of religious holidays is hampering economic activities to a great extent. The past two Central Govt. Pay Commissions [1] have recommended the abolition of all Central Govt. Holidays on religious festivals, and instead, substitute with three national Holidays, i.e., Independence Day (15 August), Republic Day (26 January) and Gandhi Jayanti (2 October).

It was also recommended to increase the amount of existing Restricted Holidays (Optional Holidays) depending on one's religious persuasion from existing two to eight. The rationale being, 8 holidays can more than cater for the festivals of any particular religion. So there is no point in having more than these many number of holidays, since religion does not warrant a Hindu to celebrate Eid or a Muslim to celebrate Diwali.

With the proposed system, however, it was left to the individual to choose which 8 Holidays to celebrate, irrespective of his religious belief. However, this recommendation has not been accepted by the Govt. of India, fearing a loss of popularity[citation needed], and thus Indian Govt. continues with an unusually large number of religious holidays as compared to most other countries.

Central & State governments in India annually issue list of holidays to be observed in respective government offices during the respective year.[9] List is divided into two parts:

The Ministry of Personnel, Public Grievances and Pensions (Department of Personnel and Training) on behalf of Government of India issues a list of holidays to be observed in central government offices during the respective year. The list is divided in two parts i.e. Annexure I & Annexure II.[9]

Annexure I also known as Gazetted holidays, consists of list of holidays which are mandatory once decided.[9] This list consists of two parts:

It consists of holidays which have to be observed compulsorily across India.[9] These holidays are:

In addition to the above 14 Compulsory holidays mentioned in para 2, three holidays are decided from the list indicated below by the Central Government Employees Welfare Coordination Committee in the State Capitals (if necessary, in consultation with Coordination Committees at other places in the State). The final list is applicable uniformly to all Central Government offices within the concerned State shall. they are notified after seeking prior approval of this Ministry and no change can be carried out thereafter. No change is permissible in regard to festivals and dates.[9]

Annexure II also known as Restricted holidays, consists of list of holidays which are optional. Each employee is allowed to avail any two holidays to be chosen out of the list of Restricted Holidays. The Coordination Committees at the State Capitals draw up separate list of Restricted Holidays keeping in view the occasions of local importance but the 9 occasions left over, after choosing the 3 variable holidays in para 3.1, are to be included in the list of restricted holidays.[9]

Central Government Organisations which include industrial, commercial and trading establishments observe up to 16 holidays in a year including three national holidays viz. Republic Day, Independence Day and Mahatma Gandhi's birthday, as compulsory holidays. The remaining holidays / occasions may be determined by such establishments / organisations themselves, subject to para 3.2.[9]

Union Territory Administrations decide the list of holidays in terms of Ministry of Home Affairs letter No.14046/27 /83- GP-I dated 15 February 1984 by which they observe a total of 16 holidays including the three National Holidays viz. Republic Day, Independence Day & Mahatma Gandhi's birthday.[9]

In respect of Indian Missions abroad, the number of holidays are notified in accordance with the instructions contained in Department of Personnel and Training's O.M. No.12/5/2002-JCA dated 17 December 2002. In other words, they have the option to select 11(Eleven) holidays of their own only after including in the list, three National Holidays and Diwali, Milad-Un-Nabi or Id-E-Milad, Mahavir Jayanti, Idu'l Fitr, Dussehra (Vijaya Dashami), Guru Nanak's Birthday, Christmas Day included in the list of compulsory holidays and falling on days of weekly off.[9]

In respect of Banks, the holidays are restricted to 15 days in a year in terms of the instructions issued by the Department of Economic Affairs (BankingDivision).[9]