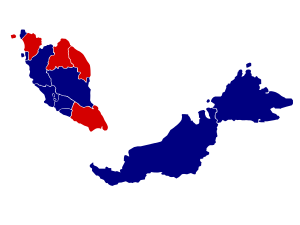 The most widespread holiday is the "Hari Kebangsaan" (National Day), otherwise known as "Hari Merdeka" (Independence Day) on 31 August commemorating the independence of the Federation of Malaya. This, as well as Labour Day (1 May), the King's birthday (first Saturday of June) and some other festivals are major national public holidays. Federal Territory day is celebrated in the three Federal territories. Malaysia Day, held on 16 September to commemorate the formation of Malaysia, became a nationwide holiday in 2010. Before that it was celebrated only in Sabah. New Year's Day is also observed as a public holiday in all Malaysian states, except for Johor, Kedah, Kelantan, Perlis, and Terengganu.

Muslim holidays are highly prominent in Malaysia. The most important of these is Hari Raya Puasa (also called Hari Raya Aidilfitri) which is the Malay translation of Eid al-Fitr. It is generally a festival honoured by the Muslims worldwide marking the end of Ramadan will the fasting month. In addition to Hari Raya Puasa, they also celebrate Hari Raya Aidiladha (also called Hari Raya Haji referring to its occurrence after the culmination of the annual Hajj or Hari Raya Qurban), Awal Muharram (Islamic New Year) and Maulidur Rasul (Birthday of the Prophet).

Malaysian Chinese typically hold the same festivals observed by Chinese around the world. Chinese New Year is the most prominent, lasting for 15-days and ending with Chap Goh Mei (十五瞑). Other festivals celebrated by Chinese are the Qingming Festival, the Dragon Boat Festival and the Mid-Autumn Festival.

Malaysian Indians of the Hindu faith celebrate Deepavali, the festival of light,[1] while Thaipusam is a celebration in which Hindu pilgrims from all over the country meet at the Batu Caves.[2] The most important Sikh festival is the Sikh new year or Vaisakhi festival. Other important days are Lodi and Gurpurab. Other Indian and Indochinese communities observe their new year celebrations at around the same time, such as Pohela Boishakh of the Bengalis and Songkran (water festival) of the Thais. People in the northern states do celebrate the Thai festival of Loy Kratong.[3]

Wesak (Malay for Vesak), the Buddhist festival commemorating Buddha's birth, is a public holiday.[1] Malaysia's Christian community observes most of the holidays observed by Christians elsewhere, most notably Christmas[1] and Easter. Good Friday, however, is only a public holiday in the two Bornean states. The harvest festivals of Gawai in Sarawak and Kaamatan in Sabah are also important for East Malaysians.[4]

New Year's Day, Chinese New Year, and the start of the Islamic calendar are all public holidays.[1]

Despite most of the festivals being identified with a particular ethnic or religious group, festivities are often participated in by all Malaysians. One example of this is the celebration of Kongsi Raya which is used when Hari Raya Puasa and Chinese New Year coincide. The term Kongsi Raya (which means "sharing the celebration" in Malay) was coined because of the similarity between the word kongsi and the Chinese New Year greeting of Gong xi fa cai. Similarly, the portmanteau Deepa Raya was coined when Hari Raya Puasa and Deepavali coincided.[5]

A practice known as "open house" (rumah terbuka) is common during the festivities, especially during Hari Raya Aidilfitri, Deepavali, Chinese New Year and Christmas. Open house means that all well-wishers are received and that everyone regardless of background is invited to attend.[6] Open houses are normally held at the home of the host and food are also prepared by the host, however, there are also open houses held at larger public venues especially when hosted by government agencies or corporations. Also during the festivities, most Malaysians would take the time off work or school to return to their hometowns to celebrate the festivities with their extended relatives. This practice is commonly known as balik kampung and usually causes traffic jams on most highways in the country.[7]

2014 Public holidays by states and territories

Public holidays by states and territories