Public holidays in the Philippines

This is a list of public holidays in the Philippines.

To create three-day weekends, President Gloria Macapagal-Arroyo moved those holidays that fell on a Wednesday or Thursday to that week's Friday; or to that week's Monday if these were on a Tuesday. When she introduced the policy in 2001, she coined the term holiday economics and argued that the policy was less disruptive of business and production schedules, encouraged domestic tourism, and gave employees longer weekends.[2] In 2004 she issued a proclamation making Christmas Eve as special non-working holiday and December 27, the Monday after Christmas as special non-working holiday.

On July 25, 2007, President Gloria Macapagal-Arroyo signed into law "An Act Rationalizing the Celebration of National Holidays" (RA 9492), designating 11 Regular Holidays and three Nationwide Special Holidays.[3] Specific dates or days for celebration are designated. The law provides that holidays falling on a Wednesday will be observed on the Monday of the week and that holidays falling on a Sunday, the holiday will be observed on the Monday that follows. Three holidays (Maundy Thursday, Good Friday, and Eid ul-Fitr) are designated as having movable dates, and the law provides that for movable holidays the President shall issue a proclamation, at least six months prior to the holiday concerned, the specific date that shall be declared as a non-working day. Though it was allowed by RA 9492, Labor Day was never moved to another date by President Arroyo at the request of labor groups.[4]

While Arroyo's "holiday economics" has been praised for boosting domestic tourism and for encouraging more quality time among members of Filipino families, businessmen complained over lost productivity and the hassle of preparing mandatory holiday and overtime salaries in a short period of time.[citation needed] Others deplored it as presidential tinkering with history via executive fiat.[2]

The following President, Benigno Aquino III, abandoned the "holiday economics" scheme saying he preferred that holidays be observed on their original dates and that the policy actually disrupted the economy, saying holidays "that fell on weekends will be commemorated on weekends so people can continue earning their wages on the days when they're supposed to."[5] 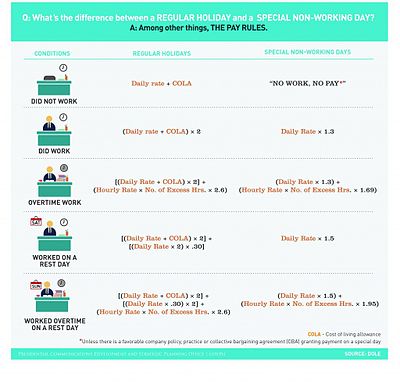 A graphic from the Office of the President of the Philippines showing the difference in pay between the two types of holidays.[6]

The Labor Code of the Philippines specifies two types of holidays: the "regular holiday" and the "special non-working day".[7] There is a difference in the pay that employers are required to pay between the two type of holidays. There is also a difference in what is closed and in how the days are declared.

Special holiday (for all schools)

Philippine cities, municipalities, or barangays, often observe one or more holidays. Being a predominantly Catholic country, these are usually the feasts of the locale's one or more patron saints.

Secular observances usually mark a government's founding day or the birth or death of a prominent native. These are often celebrated with parades, processions, entertainment, and feasting, as well as whatever local customs are traditional.

Local holidays for the most part are applicable only to the immediate area concerned, and barangay fiestas do not usually warrant a public holiday for the area unless otherwise ordered.

Independence Day was formerly celebrated on July 4–-the date of the Philippine independence from the United States in 1946, a date chosen because it was also American Independence Day. On May 12, 1962, President Diosdado Macapagal issued Presidential Proclamation No. 28, which declared Tuesday, June 12 a special public holiday throughout the Philippines, "... in commemoration of our people's declaration of their inherent and inalienable right to freedom and independence."[42] On August 4, 1964, Republic Act No. 4166 renamed July 4 holiday as "Philippine Republic Day", proclaimed June 12 as "Philippine Independence Day", and enjoined all citizens of the Philippines to observe the latter with befitting rites.[43]

In 1955, President Ramón Magsaysay issued Presidential Proclamation No. 212, s. 1955, which established the observance of Philippine–American Day every November 15, which was the anniversary of the 1935 inauguration of the Commonwealth of the Philippines.[44][45] Sometime during the administration of President Ferdinand Marcos, Philippine–American Day was renamed "Philippine–American Friendship Day" and moved to July 4, overshadowing the observance of the date as Republic Day. After the Third Republic and the abolition of the 1935 Constitution under Martial Law, it was impolitic to remind the public of the old republic. This is why, when President Marcos issued Presidential Proclamation No. 2346 s. 1984, reference was made to Philippine–American Friendship Day, which was relegated to a working holiday without mention of Republic Day.[44]

During the administration of President Corazon C. Aquino, the practice of celebrating July 4 as both Philippine–American Friendship Day and Republic Day as a non-working holiday was formally abolished. Section 26 of the Administrative Code of 1987 specified a list of regular holidays and nationwide special days that did not include July 4.[46]