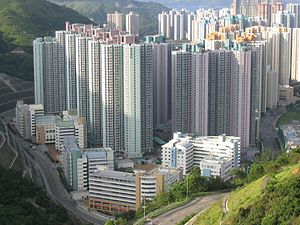 Public housing in Hong Kong is a set of mass housing programmes through which the Government of Hong Kong provides affordable housing for lower-income residents. It is a major component of housing in Hong Kong, with nearly half of the population now residing in some form of public housing.[1] The public housing policy dates to 1954, after a fire in Shek Kip Mei destroyed thousands of shanty homes end of 1953 and prompted the government to begin constructing homes for the poor.

Public housing is mainly built by the Hong Kong Housing Authority and the Hong Kong Housing Society. Rents and prices are significantly lower than those for private housing and are heavily subsidised by the government, with revenues partially recovered from sources such as rents and charges collected from car parks and shops within or near the residences.

Many public housing estates are built in the new towns of the New Territories, but urban expansion has left some older estates deep in central urban areas. They are found in every district of Hong Kong except in Wan Chai District. The vast majority of public housing is providing in high-rise buildings, and recent blocks usually comprise 40 or more storeys. 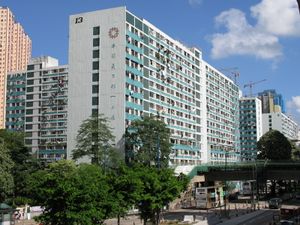 On 25 December 1953, a major fire in Shek Kip Mei destroyed the makeshift homes of refugees from Mainland China, leaving more than 50,000 people homeless. After the fire, and facing a surge of immigrant population, then governor Alexander Grantham launched a public housing program to introduce the idea of "multi-storey building" for the immigrant population living there, thus commencing a programme of mass public housing, providing affordable homes for those on low incomes.[2] Some scholars have argued that the government has been overstating the role of the fire in the history of public housing in Hong Kong.[3] For example, Faure argues that Grantham was concerned with introducing subsidised housing as early as 1949, but encountered opposition from Chinese members of the Legislative Council.[4]

The Shek Kip Mei Estate, ready for occupation in 1954, was the first tangible manifestation of this policy.[2] In those early days, housing units were little more than small cubicles, and the original plan was to allocate 24 square feet (2.2 m2) per adult and half that for each child under 12.[5] However, they were in reality often occupied by more than one family, due to the extreme shortage of available housing.[6] Facilities and sanitation were rudimentary and communal. Rents were pitched at between HK$10 and 14, without caps on income. That year, the Resettlement Department was formed, as was the first Housing Authority (sometimes referred to as "former Housing Authority"), out of the Urban Council, through enactment of the 1954 Housing Ordinance.[7] The Shek Kip Mei estate has now been extensively redeveloped.

In 1961, the "low-cost housing" scheme was introduced through the construction of 62,380 flats (capable of housing 363,000 people with monthly household incomes of no more than HK$600) in 18 estates, while HA accommodation would be available to those whose household incomes were between $900 and $1500.[7]

In 1963, due to the rapid escalation of squatter numbers, squatters' eligibility for public housing was frozen, and future squatter areas came under licensing per the 1964 White Paper. The Housing Board was set up with the role of coordinating between agencies responsible for domestic housing. It made recommendations to have annual evaluations of supply and demand of housing, as well as increasing the minimum standard floor area per person to 35 sq ft (3.3 m2).[7]

Lower Ngau Tau Kok Estate, built between 1967 and 1970, was among the first group of resettlement estates built with elevators. All blocks were 16-floor high, and elevators from the ground floor could reach the 8th and the 13th floors.[8]

In 1973, the Government of Hong Kong announced a ten-year plan for the public provision of housing, to provide everyone in Hong Kong with permanent, self-contained housing with a target of housing. The objective was to provide 1.8 million people with "satisfactory accommodation".[7] The Government saw as its responsibility to provide accessible housing for "the poor" – defined as those whose monthly household income was between HK$2,100 (for a family of 3) and HK$3,150 (for a family of 10).[9]

In 1975, the Government officially opened the Oi Man Estate, a housing estate built on a concept of "a little town within a city". The estate of 6,200 flats, constructed on a site of 21 acres (85,000 m2), and capable of housing 46,000 people would have a self-contained environment complete with commercial amenities ranging from markets and barber shops to banks. This represented an innovation in that the commercial premises would serve the local estate, while paying a rent determined by public tender. Banks, restaurants, and other large premises would be let out on a five-year contract, competing on a monthly rental offered, while tenants for smaller premises would compete on premium paid based on fixed monthly rentals. Unlike the generations of housing estates which preceded it, there would be designated market stalls and cooked-food stalls. Street vendors would be no longer be tolerated.[10]

In 1980, the government launched the first batch of public housing in the Home Ownership Scheme, thereby allowing low-income families to own their homes for the first time.

A new town to be constructed on 240 hectares of reclaimed fishponds and wetland was conceived in 1987 to house 140,000 people. Since Tin Shui Wai was entirely a virgin development, it was conceived with wider walkways and larger open areas when compared to other urban developments in Hong Kong.[11]

A 1988 crime survey reported that crime rates were lower in the public housing estates of Hong Kong than in private housing areas.[12] 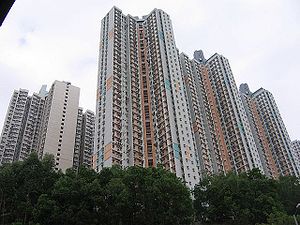 Several designs have been used for the blocks of the public housing estates, including:

The following is a list of selected public housing estates and their specificities: